Note: Some topics may be overlapped. 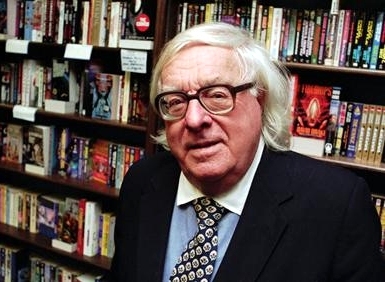 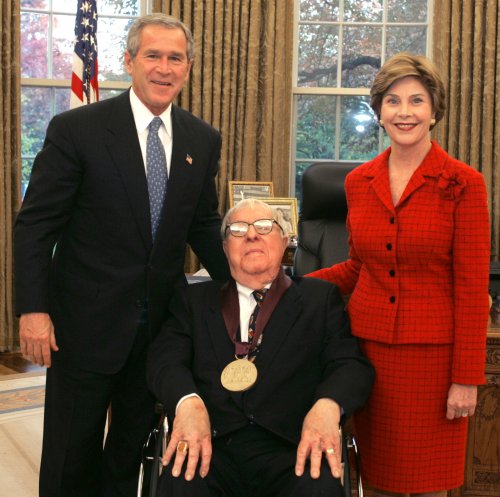 Fahrenheit 451 Historical Context - The Life and Times of Ray Bradbury. Timeline. Fahrenheit 451: About the Author: Ray Bradbury (1920-2012) - includes an Interview with Ray Bradbury on January 5, 2005 in Los Angeles, by Dana Gioia, Chairman of the National Endowment for the Arts. From The Big Read, NEA. (Bradbury died June 6, 2012 in California).

Ray Bradbury: The Man, His Life & His Work. Created by David McKinney, from Arago: People, Postage and the Post, Smithsonian National Postal Museum Exhibit. "On June 5th 2012, author Ray Bradbury passed away at his home in California at the age of 91. Bradbury wrote numerous books, articles, poems and short stories and is remembered as one of the great science fiction and fantasy writers of the 20th century. In tribute to Ray Bradbury, this mini-online exhibit will illustrate his life and achievements through postage stamps." Contents: 1. Introduction to Ray Bradbury. 2. Early Life and Work. 3. First Major Works. 4. Themes and Concepts. 5. Later Life and Legacy.

Ray Bradbury Biography from RayBradburyOnline, site created and maintained by a fan of Bradbury's work. American novelist, short-story writer, essayist, playwright, screenwriter, and poet, Ray Bradbury was born in Waukegan, Illinois on August 22, 1920, the third son of Leonard Spaulding Bradbury and Esther Marie Moberg Bradbury. Photos include Bradbury when he was a young boy.

Ray Bradbury is on fire! by James Hibberd. Interview from Salon.com, Aug. 29, 2001. "Author Ray Bradbury, now 81 and recovering from a stroke, has recently become the most sought-after writer in Hollywood."

. . . Danny Karapetian, shared these words with io9 about his grandfather's passing: '. . . His legacy lives on in his monumental body of books, film, television and theater, but more importantly, in the minds and hearts of anyone who read him, because to read him was to know him. He was the biggest kid I know.'"

Sci-fi author Ray Bradbury dies at 91 from CBC News. "Bradbury created a dystopian future in which books were burned in Fahrenheit 451, his best-known novel.

. . . He also wrote the screenplay for the 1956 film version of Moby Dick and created TV scripts for The Twilight Zone.

'In a career spanning more than seventy years, Ray Bradbury has inspired generations of readers to dream, think, and create,' the statement said. 'A prolific author of hundreds of short stories and close to fifty books, as well as numerous poems, essays, operas, plays, teleplays, and screenplays, Bradbury was one of the most celebrated writers of our time.'

. . . He is survived by his four daughters, Susan Nixon, Ramona Ostergren, Bettina Karapetian, and Alexandra Bradbury, and eight grandchildren. His wife of 57 years, Marguerite, died in 2003."

Challenging Destiny - Fahrenheit 451. Science Fiction and Fantasy Book Review by James Schellenberg. "Fahrenheit 451 is one of Bradbury's most famous books, and it reads like a fever dream -- intensely cinematic, directed by its own weird dream logic, and full of the quality of images that haunt you for days. ... The book is divided into three sections: 'The Hearth and the Salamander' introduces Montag at home and at work; 'The Sieve and the Sand' finds Montag increasingly disillusioned with his society; and 'Burning Bright' concerns Montag's escape and the eventual end of the society he left behind."

Essays on Fahrenheit 451. Literary analysis of the novel from EDU Essays.com, a commercial enterprise. Only the first 1,000 characters of the essay is displayed. To download the complete version of any essay, regardless of length or quality, payment is required.

Fahrenheit 451 by Ray Bradbury . An Infinity Plus Review by Josh Lacey.

Fahrenheit 451: Preface from The Big Read.

The Failure of Fahrenheit 451. Article by Jeremy Smith, Director of Financial Services at the Independent Press Association. Published on 13 October 2003 in Strange Horizons (www.strangehorizons.com), a weekly web-based magazine of and about speculative fiction. "Let's call it Cassandraism, after the daughter of Troy whose prophecies were not believed. ... Fahrenheit 451 has devolved into a near-total fiasco ... Today, no firemen roam the land literally burning books ... but they are merely a dramatization of Bradbury's true fears."

The incendiary prophet by David T. Wright. On Fahrenheit 451 by Ray Bradbury, Wright comments: "In it he managed to predict with frightening accuracy such current social pathologies as the dumbing down of popular entertainment and education, our growing addiction to empty sensory stimulation, the rise of random violence among youth, the increasing anomie and alienation among everyone, the cult of pharmaciæ, the cult of consumerism ... The amazing thing is that he did it more than 40 years ago."

Ray Bradbury and the Real Lesson of Fahrenheit 451 by Doug Mataconis, Outside the Beltway, June 6, 2012. "... Bradbury has decided to make news about the writing of his iconographic work and what he really meant. Fahrenheit 451 is not, he says firmly, a story about government censorship. Nor was it a response to Senator Joseph McCarthy, whose investigations had already instilled fear and stifled the creativity of thousands."

Ray Bradbury, RIP: Fahrenheit 451 Is Still Misinterpreted. We, Not Government, Are Enslaving Ourselves by Jill Stewart from LA Weekly, 6 June 2012.

Sci-Fi Scribes on Ray Bradbury: "Storyteller, Showman and Alchemist" by John Joseph Adams, Culture, 6 June 2012. "With books like Fahrenheit 451 and The Martian Chronicles, sci-fi writer Ray Bradbury made a lasting mark on pop culture by taking readers to strange new worlds. And talk about changing the future: His fantastic, mind-expanding tales also shaped the storytelling of a generation of scribes who came after him."

Fahrenheit 451 Symbolism. Symbols and Themes in Fahrenheit 451 by Trent Lorcher, Edited by S Forsyth, Updated on 8 December 2010, from BrightHub.com.

SparkNotes: Fahrenheit 451. Contents: Context, Plot Overview, Character List, Analysis of Major Characters, Themes, Motifs & Symbols, ?The Hearth and the Salamander - The hearth, or fireplace, is a traditional symbol of the home, and the salamander is one of the official symbols of the firemen, as well as what they call their fire trucks. Both of these symbols have to do with fire, the dominant image of Montag?s life." The Sieve and the Sand, Burning Bright, Important Quotations Explained, Key Facts, Study Questions & Essay Topics, Quiz, Suggestions for Further Reading.

Lesson Plans and Webquests on Fahrenheit 451

The Teacher's Guide to Ray Bradbury: Fahrenheit 451 by Jeanne M McGlinn, from Teaching Books. Guide is designed to provide teachers with resources and activities to introduce themes and activate background knowledge before reading the novel. Contents include: Synopsis of the Novel, About the Author, Before Reading: Anticipation Guide, Before Reading: Background Knowledge, Initial Exploration of Themes, During Reading, After Reading Activities , Reading Other Dystopian Novels , Literature Circle and Young Adult Fiction on Censorship, Additional Resources on Ray Bradbury.

Teaching Fahrenheit 451. Brief description of worksheets with suggested activities for students created by Bernd Wahlbrinck, a teacher of English for over 20 years at a "Gymnasium" in Northrhine-Westfalia, Germany. Worksheets are available online for 40 cents per worksheet with a taster offer of 1 free worksheet of your choice.

Audio Excerpt of Fahrenheit 451 - Written by Ray Bradbury and read by the author himself, from RayBradbury.com.

Fahrenheit 451 (1966 film) from Wikipedia, the free encyclopedia. Film of a dystopian future, based on the novel by Ray Bradbury. Set in a world where books are banned and critical thought is suppressed; the central character, Guy Montag, is employed as a "fireman", i.e. "book burner". 451 degrees Fahrenheit (about 233&degC) is stated as "the temperature at which book-paper catches fire, and burns ...". Film directed by François Truffaut. (Note: A dystopia is a fictional society that is the antithesis of utopia.)

Fahrenheit 451 (1966 film) from Wikipedia, the free encyclopedia. "Fahrenheit 451 is a 1966 science fiction drama film directed by François Truffaut and starring Oskar Werner, Julie Christie, and Cyril Cusack. Based on the 1953 novel of the same name by Ray Bradbury, the film is about an oppressive future in which a fireman, whose duty it is to destroy all books, begins to question his task.This was Truffaut's first color film as well as his only English-language film. At the 1966 Venice Film Festival, Fahrenheit 451 was nominated for the Golden Lion."

Fahrenheit 451 by Ray Bradbury, Part 1, 1 of 2. YouTube video, 1 hr. A woman reading the entirety of Fahrenheit 451 out loud while showing the pages themselves.

Fahrenheit 451 by Ray Bradbury, Part 2, 2 of 2. YouTube video, 1 hr. 6:04 min. A woman reading the entirety of Fahrenheit 451 out loud while showing the pages themselves.

Fahrenheit 451 by Ray Bradbury, Part 3. YouTube video, 39:08 min. A woman reading the entirety of Fahrenheit 451 out loud while showing the pages themselves.

Book Burning from United States Holocaust Memorial Museum. Holocaust Encyclopedia. ""Book burning" refers to the ritual destruction by fire of books or other written materials. Usually carried out in a public context, the burning of books represents an element of censorship and usually proceeds from a cultural, religious, or political opposition to the materials in question. Book burning has a long and dark history ..."

The Burning of the Books in Nazi Germany, 1933:The American Response by Guy Stern, from Simon Wiesenthal Center Multimedia Learning Center.

Fahrenheit 451 by Ray Bradbury: Critical Essays: The Issue of Censorship from CliffsNotes.

Fahrenheit 451 discussion. Why do you think they burn the books?

Harry Potter and the Ministry of Fire by David Serchuk, from Forbes Special Report: Books. "In August 2003, two Michigan pastors, T.D. Turner Sr. and son T.D. Turner Jr., took a stand against sorcery by burning a Harry Potter book outside their Jesus Non-Denominational Church. ... One pastor, Douglas Taylor of the Jesus Party in Lewiston, undeterred, slashed and destroyed 12 Potter books instead. ... Ray Bradbury, however, thinks that Taylor is deluded. The 86-year-old author of the anti-censorship novel Fahrenheit 451 is a passionate advocate of free speech and believes Taylor and his ilk are at best clueless about their actions."

Burning Bright. A general knowledge quiz crafted by Trivia Architect towman931. 10 multiple choice questions with answers and explanatory comments provided, as well as percentage of players who got the correct answers.

Fahrenheit 451 from Game Downloads. Comment from reviewer: "A nice graphical textadventure. Not following the book at all. In the game your mission is to burn all books, but doing so you only want to read them and are not willing to burn them anymore..."

'Fahrenheit 451'. Quiz crafted by Trivia Architect kknesh. 10 multiple choice questions with answers and brief comments provided at the end. Includes percentage of players who got the correct answers. (Note incorrect spelling of "Ecclesiastics" - One must be a member or create a New FunTrivia Account to report errors).

Fahrenheit 451 #2 Challenge Board - Jeopardy Game. Trivia over symbol, character, quote id, and technology from the novel. One or two players. Choice of Flash or HTML version. Must know novel well in order to play this game.

GradeSaver - Fahrenheit 451 Quiz 1. Excellent quiz. 25 multiple choice questions. Provides you with a score. You can review your answers after completion. All correct and incorrect answers are highlighted.

He who destroyes a good Booke, kills reason it selfe. An exhibition of books which have survived Fire, the Sword and the Censors, from University of Kansas Library 1955.

Is a Bible Burned in Fahrenheit 451? Slides from Wiki Answers.com.

Rags to Riches: Part II Fahrenheit 451 Test Review Game . Play this 'Who Wants to Be a Millionaire' inspired game. Your choice of Flash or HTML version. You can play the game multiple times due to a large database of random questions. You have 3 clues/hints or life-lines to help you. Sorry, game over if you make a mistake. You have to start all over again.

Links to other Fahrenheit 451 Web Sites

Fahrenheit 451: The Temperature at Which Book Paper Catches Fire, and Burns. Synopses and Reviews. "Since the late 1940s, Ray Bradbury has been revered for his works of science fiction and fantasy. With more than 4 million copies in print, Fahrenheit 451 - originally published in 1953 - remains his most acclaimed work. Fahrenheit 451 is the temperature at which book paper burns. Fahrenheit 451 is a short novel set in the (perhaps near) future when 'firemen' burn books forbidden by the totalitarian 'brave new world' regime. The hero, according to Mr. Bradbury, is 'a book burner who suddenly discovers that books are flesh and blood ideas and cry out silently when put to the torch.'"