Original article printed in Jan. 21-22, 2006 issue entitled: Genetics: As Time Ticks On
Reprinted on page 9 in July 11-12, 2009 issue of
The Mississauga News under the feature:
Health, Wellness & Beauty, Medicine Matters.

Golden year club members, time-testers, pensioners, seasoned survivors, snow birds, and retirees form the topic of discussion in this article. I have had many opportunities to address audiences drawn from this ever-increasing demographic and still find myself lost at how best to address this group. How do you know whom to include in this bunch? In general, they have been around the block and learned a thing or two on the way. Youth and vigor are always on their mind. The only thing worse than a four-letter word is a three-letter word spelt O-L-D. Things once clear are now blurry, open things become blocked, and some things remain firm but in the wrong places. Dryness replaces wetness and funerals begin to outnumber weddings.

As we desiccate, shrink and shrivel, it is worthwhile to attempt to understand how this process functions. It is your best chance to stay ahead of it. The process of growing old is probably better referred to as senescence. Some people now believe that "aging" is solely due to an accumulation of damage to your DNA resulting in loss of the ability for your cells to divide. They feel that free radicals are the main culprits. These are molecules such as super oxide and nitric oxide with unpaired electrons in their outer orbits. They are highly reactive and can damage proteins, lipids and especially DNA. They often result from our poor food choices.

If it were as simple as accumulated DNA damage, then we would expect to see a wide range of older people. Currently, there is an upper limit to human chronological age. Our maximum life span seems to be between 115-120 years. Human cells lose the ability to duplicate themselves after about fifty repetitions. Interestingly, this magic number of 50 seems to hold steady across the animal kingdom. The cells in birds with a 2-year life span or cells in a 150-year-old giant tortoise lose their abilities to duplicate after 50 multiplications. As we slowly lose that ability, things start to look it. Another widely accepted theory of aging suggests that certain cells are preprogrammed to only last a certain amount of time. The programming can vary within your body. For example, the female reproductive organs seem to age the fastest and lose their function by age fifty. Menopause is a relatively new concept in human history. For most of the last millennium, women rarely made it to that age so that cellular preprogramming may not have mattered. But even today, women tend to outlive men. So, the loss of sex hormones may be linked to aging. Historically, eunuchs, who are males without testes, tended to live longer as do sterilized cats and dogs. The commonest cause of death of the elderly in our culture is cardiovascular disease. Estrogen is a sex hormone that until recently has been naturally augmented when ovarian supplies fail. In addition to the numerous beneficial actions, recent data has noted a slight increase in cardiovascular problems with its use.

The advent of better sanitation and medical care has increased our life expectancy significantly. Curing disease will get more people closer to the 120 maximum, but not beyond. Living a perfect life punctuated with the perfect diet can only get us so far. With a lot more older folks around, someone had to study and look after them, so a whole new field of medicine called Geriatrics came to be. Interestingly, it is accepted that more and more people are not dying of any particular disease, but simply of "old age". Cellular repair mechanisms in essential organs such as heart and lung cease to function. This lends support to the genetic program theory of cell death. It also provides hope. By unlocking the code for the cascade of proteins or enzymes that terminate cell propagation we might be able to block it. This might result in an unlimited ability to repair and multiply and raise life expectancy into the hundreds of years.

● 5 New Tests That Can Tell You How Long You'll Live from Everything Zoomer.

● Life Expectancy Calculator from Sun Life, Canada. Use this calculator to estimate how long you might live and to see what you can do to live a longer, healthier life - now and in retirement.

● Lifespan Calculator. "How long you have already lived is one of the best predictors of how long you may live." Answer 13 questions to find out how long you're predicted to live.

● senescence.info. An educational resource on the science of aging.

● What Is Aging? from senescence.info. "Aging is one of the most complex biological processes, whose definition is intrinsically related to its phenotype ... Aging has been defined as the collection of changes that render human beings progressively more likely to die (Medawar, 1952)."

● Human Life Span by Mark Stibich, Ph.D., About.com. Definition of Life span: The maximum number of years an individual from a given species can live.

● Human Longevity from Wikipedia. "Human Longevity is a San Diego-based venture launched by Craig Venter and Peter Diamandis in 2013. Its goal is to build the world's most comprehensive database on human genotypes and phenotypes, and then subject it to machine learning so that it can help develop new ways to fight diseases associated with aging. The company received US$80 million in investments in its Series A offering in summer 2014 and announced a further $220 million Series B investment offering in April 2016."

● Extending Human Life: Progress and Promises by Ker Than, LiveScience Staff Writer. "... getting the average person from 80 to 120 and beyond requires research into the very cellular mechanisms that cause gray hair and wrinkles, that make our bones creak and our minds go weak, and what generally make all creatures shrivel, shrink and waste away. The big question: Can cell aging be halted or reversed?

● Unraveling the Secrets of Human Longevity from Longevity Science. By Dr. Leonid A. Gavrilov and Dr. Natalia S. Gavrilova, Center on Aging, NORC/University of Chicago. 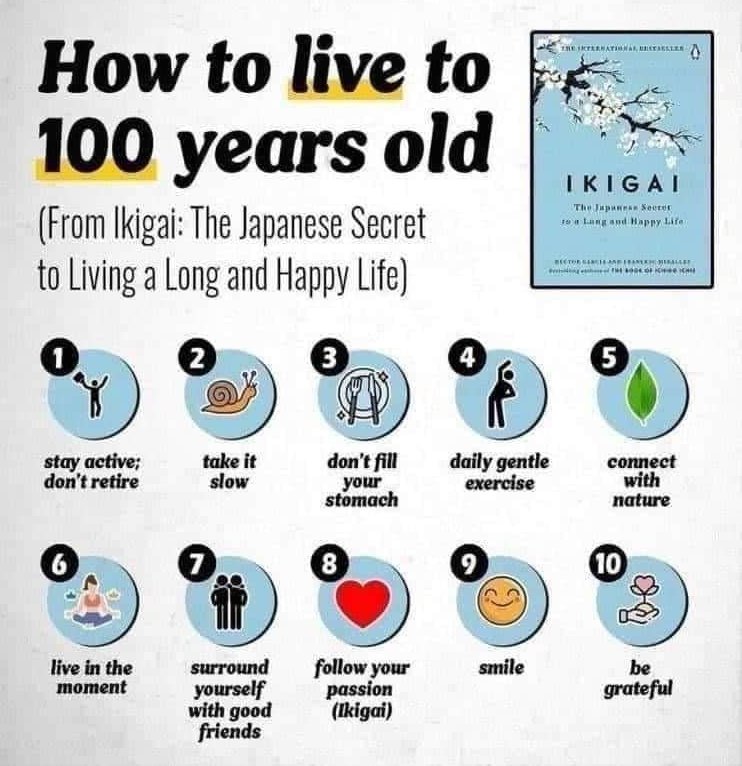 Image source: Twitter
Ikigal: The Japanese Secret to Living a Long and Happy Life
~ From Amazon.com

● What is the oldest living thing on earth? Who has the secrets to longevity? By jstankevicz, from HubPages.

● Rachel Sussman: The world's oldest living things | TED Talk at TEDGlobal 2010. Video, 14:08 min. Rachel Sussman shows photographs of the world's oldest continuously living organisms -- from 2,000-year-old brain coral off Tobago's coast to an "underground forest" in South Africa that has lived since before the dawn of agriculture. Images include a 2,200 year-old Patagonian Cypress, 3,000 year-old lichen in Greenland, and an 80,000 year-old clonal colony of Quaking Aspens, with Location Map of living things, 2000 years old and older.

● What's the Oldest Thing Alive Today? By Stephanie Pappas, Live Science Contributor, Feb. 18, 2017. "Figuring out the oldest thing alive requires defining 'alive.' That's not as easy as it might seem ... An old bristlecone: ... According to OLDLIST, a database of ancient trees, the oldest known living bristlecone is a 5,062-year-old tree in the White Mountains of California ... An even older spruce ... look no further than Dalarna, Sweden. The province is home to a spindly spruce that has been cloning itself for 9,550 years."

● Life extension from Wikipedia. "Life extension science, also known as anti-aging medicine, indefinite life extension, experimental gerontology, and biomedical gerontology, is the study of slowing down or reversing the processes of aging to extend both the maximum and average lifespan. The ability to achieve this, however, does not currently exist."

● 5 Secrets to Transform Your Experience of Aging by Ed Merck, Retirement Expert, Oct. 16, 2014. They'll help you shift from a sense of loss to a sense of gain.

● Has Anyone Ever Died of Old Age? - in PDF, pp. 5-17 by Leonard Hayflick, Ph.D. Paper Presented at the 55th Annual Scientific Meeting of the Gerontological Society of America, November 25, 2002. "Leonard Hayflick ... in 1962, overturned scientific dogma with his discovery that ... cultured normal human cells have a limited capacity for replication. This phenomenon is known as 'The Hayflick Limit.'

● Senescence from Wikipedia, the free encyclopedia. Senescence is a process induced by evolution into an organism's genetic make up so that it may live to its healthiest until its reproductive age and die slowly and gradually thereafter ... The word senescence is derived from the Latin word senex, meaning "old man" or "old age" or "advanced in age".

● AnAge: The Animal Ageing and Longevity Database. The Human Ageing Genomic Resources (HAGR) is a collection of databases and tools designed to help researchers understand the genetics of human ageing through a combination of functional genomics and evolutionary biology.

● The Evolution of Ageing from Human Ageing Genomic Resources (HAGR). "Our aim in this project is to study the events, including genetic changes, shaping longevity in different lineages to help understand why different species age at different paces."

● The Evolutionary Theory of Aging from senescence.info.