What Causes the Ringing in My Ears?

Article printed on page 23 in the November 29-30, 2003 issue
Reprinted under the title: "The Cause of Ringing in Ears Is Controversial"
on page 21 in the September 14, 2011 issue of
The Mississauga News under the feature: Health & Beauty, Medicine Matters

Tinnitus is the medical name for ringing in the ears. It is best described as a perception of sound when none is present. Sometimes the noise is described as hissing, roaring or whining. 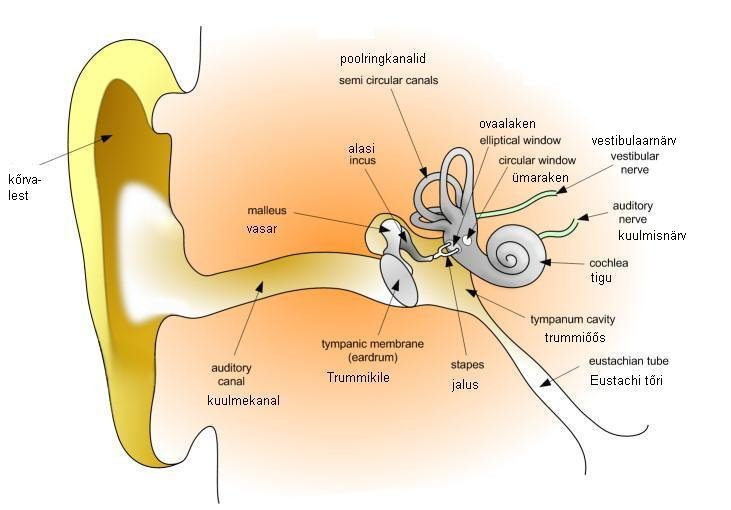 Click on image to see a larger diagram of a Cross Section of the Human Ear,
bilingual in English and Estonian

The type of noise is always the same, but the perceived loudness can vary, and it is not always present in both ears. It is a condition that afflicts 1 in 6 North Americans at some point in their lives. Tinnitus has the potential to completely disable a person. The noises cannot be heard by other people, although there is a rare form of "objective tinnitus", which results from transmitted noise from abnormal blood vessels and muscle clicks.

The cause of tinnitus is controversial. The current school of thought suggests that the origin is due to microscopic changes in nerve endings of the hearing nerve that transmits signals from the inner ear to the brain.

Most of us have experienced some mild form of transient deafness and tinnitus after being exposed to loud noise, which resolves in a short time. Advanced age itself can cause changes in these nerve endings producing tinnitus.

Some causes are easily treatable while others are resistant. Sometimes physical factors such as wax build up will produce tinnitus, while simple removal cures it. Medical conditions that affect nerve endings can cause tinnitus. I run checks for diabetes, anemia, thyroid problems, blood pressure, allergies and endocrine problems when tinnitus persists. One rare cause that I have seen, involves a tumour of the middle ear, called an acoustic neuroma which responds to surgery.

Some minor head injuries and chronic ear infections produce tinnitus as well. Some antibiotics, anti-inflammatories, older antidepressants and overuse of aspirin can cause ringing in the ears.

Many times the cause is not readily apparent. It is impossible to objectively document post-viral causes. Treatment in the resistant cases is quite difficult. Sometimes it involves trying medications with varied success.

Other strategies use masking. Tinnitus is more bothersome in dark quiet surroundings. Introducing a competing sound such as a radio may make it less noticeable. Sophisticated "white noise" headsets and hearing aids attempt to produce the same reduction. Some people are driven to undergo sophisticated training techniques in relaxation and cognitive blocking.

There also seems to be a large market of unproved remedies touting "cure for the right price", that springs up around difficult to treat conditions such as tinnitus. It makes good sense to protect your hearing at an early age, so as to avoid problems later on. Tinnitus is a serious condition. It should involve a team approach between your family doctor, otolaryngologist (ENT) and audiologist.

Related resources:
● Tinnitus: Ringing in the ears and what to do about it. Harvard Women's Health Watch, Published: September, 2011. Updated: August 16, 2017.
● Could we trick the brain to stop tinnitus? By Martine Hamann, The Conversation, CNN, March 22, 2017.
● The Brain: "Ringing in the Ears" Actually Goes Much Deeper Than That. Research on tinnitus has shown that it's rooted in the very way we process and understand sound. By Carl Zimmer, Discover: Science for the Curious, October 27, 2010.
● Tinnitus from Wikipedia.
● Guidelines for the Grading of Tinnitus Severity. The Results of a Working Group Commissioned by the British Association of Otolaryngologists, Head and Neck Surgeons, from OTOHNS.net.
● Tinnitus from eMedicine Health. Tinnitus Causes, Symptoms, Diagnosis, Treatment and Prevention.
● Tinnitus Causes from Mayo Clinic. Symptoms. Definition of Tinnitus.
● Ear Health - Tinnitus from C-Health.canoe.ca. Causes, Symptoms, Treatment, Diagnosis.
● What Is the True Nature of Tinnitus? Where Does It Come From? How Should We Treat It? from Tinnitus Association of Canada.
● Sound as Therapy.
● Medications - Tinnitus Symptoms Can Be Treated.
● Tinnitus Facts
● The Noise in Your Ears: Facts about Tinnitus
● FAQ: What is Tinnitus?
● Tinnitus (Ringing and Other Ear Noise). Noise Relief: Resources for Tinnitus Sufferers.