Ringing in the Ears
and Causes of Tinnitus

Article printed on page 28 in the June 30, 2010 issue
and reprinted on page 25 in the August 31, 2011 issue of
The Mississauga News under the feature: Health & Beauty, Medicine Matters. 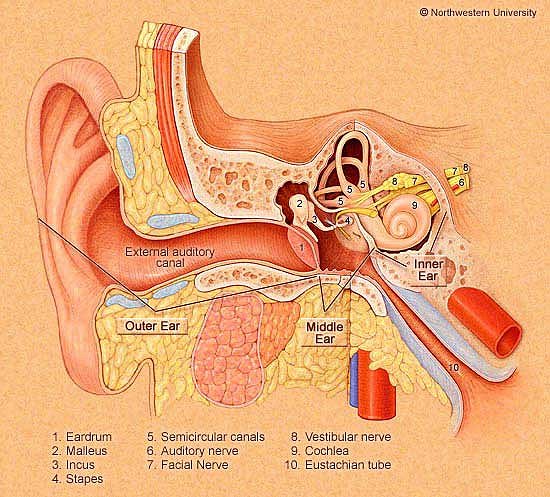 Structures of the ear.
Most tinnitus is due to damage to the cochlea (#9 above)
Image source: Northwestern University

Tinnitus is the medical name for ringing in the ears. It is best described as a perception of sound when none is present. Sometimes the noise is described as hissing, roaring or whining. The type of noise is always the same, but the perceived loudness can vary, and it is not always present in both ears. It is a condition that afflicts 1 in 6 North Americans at some point in their lives. Tinnitus has the potential to completely disable a person.

The cause of tinnitus is controversial. The current school of thought suggests that the origin is due to microscopic changes in nerve endings of the hearing nerve that transmits signals from the inner ear to the brain.

Most of us have experienced some mild form of transient deafness and tinnitus after being exposed to loud noise, which resolves in a short time. Advanced age itself can cause changes in these nerve endings producing tinnitus. Some causes are easily treatable while others are resistant.

Sometimes physical factors such as wax build up will produce tinnitus, while simple removal cures it. Medical conditions that affect nerve endings can cause tinnitus.

One rare cause that I have seen, involves a tumour of the middle ear, called an acoustic neuroma which responds to surgery.

Some minor head injuries and chronic ear infections produce tinnitus as well. Some antibiotics, anti-inflammatories, older antidepressants and overuse of aspirin can cause ringing in the ears.

Often, the cause is not readily apparent. It is impossible to objectively document post-viral causes.

Treatment in the resistant cases is quite difficult. Sometimes it involves trying medications with varied success. Other strategies use masking. Tinnitus is more bothersome in dark quiet surroundings. Introducing a competing sound such as a radio may make it less noticeable. Sophisticated "white noise" headsets and hearing aids attempt to produce the same reduction. Some people are driven to undergo sophisticated training techniques in relaxation and cognitive blocking.

It makes good sense to protect your hearing at an early age, so as to avoid problems later on in life.

Tinnitus can be an ongoing and aggravating condition. It should involve a team approach among your family doctor, otolaryngologist (ENT) and audiologist.

● Tinnitus: Symptoms and Causes, Diagnosis and Treatment, from Mayo Clinic. Tinnitus is the perception of noise or ringing in the ears. A common problem, tinnitus affects about 1 in 5 people. Tinnitus involves the annoying sensation of hearing sound when no external sound is present.

● Home Remedies for Tinnitus from Home Made Medicine.com. "In Latin, tinnire means 'to ring'. Tinnitus is the medical term for 'ringing in the ears'. It is the perception of ringing, hissing, or other sound in the ears when no external sound is present. It affects 1 in 5 of the World's population, and touches over 33% of the elderly community." Includes 12 causes of Tinnitus and alternative

• 1. Rub head from front to back with both hands as if combing hair, 20 times.

• 4. Locate grooves at base of skull in neck region, massage with thumbs, 20 times.

• 5. Relax hands and lightly tap all over head for 1 minute.

● Tinnitus from Wikipedia, the free encyclopedia.

● The True Nature of Tinnitus. Where does it come from? How should we treat it? From Tinnitus Association of Canada.

● ATA's Top 10 Most Frequently Asked Questions from American Tinnitus Association (ATA). Is there a cure for tinnitus? What is tinnitus? Does tinnitus cause hearing loss? How many people have tinnitus? (ATA estimates that over 50 million Americans experience tinnitus to some degree). What causes tinnitus?

● FAQ: What is Tinnitus? from Tinnitus Association of Canada.

● Tinnitus (Ringing and Other Ear Noise) from MedicineNet.