How Quickly It Goes from Good to Catastrophic
(Complacency of Electronic Age:
GPS's and Cell Phones)

Article printed on page 23 in the May 11, 2011 issue of
The Mississauga News under the feature: Health & Beauty, Medicine Matters.

The recent survival story about stranded motorists out west, serves to remind us of the complacency of the electronic age. GPSs and cell phones have replaced the need to plan.

Gone are the days when it was essential to memorize and rehearse your driven route because making a call on the road was just not an option. At one time, the family Chevy carried essentials of survival buried deep in the crevices of the large trunk: chains, shovel, blanket, light, salt, flares, gloves, tool kit and assorted other things. Many people now seem to feel that the cell phone is able to replace all that.

I often wonder why the 400 series highways pose such severe hazards for anyone finding themselves on the shoulder in a disabled vehicle. It seems that your mind uses different cues when driving on multi-lane highways as opposed to urban streets. Without stop-lights or signs you become part of a wave of movement and your mind uses cues to help keep you in a lane of cars. These cues can remain unaltered for long periods of driving time. The sudden intrusion of an unexpected stimulus, such as a stalled car can result in a confused response especially if you are fatigued. Remaining in a disabled vehicle on a multi-lane highway in adverse weather is an extremely high-risk behavior.

If you drive the 400 series highways and develop car trouble, act quickly. Using emergency flashers along with highway safety flares is prudent. Carry cold and wet weather gear in the car, and be prepared to move well away from your vehicle if you experience trouble. Never sit in a stalled car on a highway. These situations define Coroner Nightmares.

In more remote areas, the opposite rings true. I enjoy my time in the Haliburton Forests, and even there it is amazing how quickly city slickers lose their way, seemingly meters from a road or path. Lost hikers are common, but most re-emerge on their own with a sense of wilderness respect painted on them.

In the larger picture it is wiser to stay with your vehicle, if you are not prepared for the weather. Communicate frequently, whether it is written notes, marks on trees, piles of stone, fire, sound, tracks or calls. Never go it alone. Frostbite, dehydration and hypothermia are the main enemy.

Hypothermia is a state where body heat drops due to spent energy reserves. Initially, you have no idea that this is happening. Your brain has trouble functioning, resulting in confusion and disorientation. Hypothermia slows down metabolism, and so people found unconscious and seemingly cold, should be vigorously resuscitated with heat and fluids.

The most frequent comment that I hear from cold weather victims is how quickly things go from good to catastrophic. A little preparation can go a long way!

● Which is better for navigation - compass or GPS? Compass vs GPS - the Pros and the Cons, by Debra Ronca, HowStuffWorks.

● The Pros and Cons of GPS Systems That May Create Distracted Drivers from Reynolds and Reynolds Law Firm, May 8, 2017. 1. Figure out the logistics before you start your car. 2. Keep your device in a comfortable and safe location. 3. Use a GPS system that is known to be safe and efficient.

● Seeing Hazards from Driving Rules Network. The Commercial Drivers License: Importance of Seeing Hazards. "A hazard is any road condition or other road user (driver, bicyclist, pedestrian) that is a possible danger."

● Vehicle Breakdown Tips and Information from PatrolPrices. What should you do in the event of a breakdown? Broken down on a motorway (highway)? How do I know where I am?

● What to do if you breakdown? From SaferMotoring.co.uk.

● The Global Positioning System (GPS) from Wikipedia, the free encyclopedia. "The Global Positioning System (GPS) is a space-based global navigation satellite system (GNSS) that provides location and time information in all weather, anywhere on or near the Earth, where there is an unobstructed line of sight to four or more GPS satellites. It is maintained by the United States government and is freely accessible by anyone with a GPS receiver."

● Over Reliance on GPS Risks Safety by Alan Sorum. Dependence on Technology Seen as an Increasing Safe Boating Threat.

● GPS fosters hopeless dependency by Indo Asian News Service, 20 April 2011. "Growing use of satellite navigation or the Global Positioning System (GPS) is actually fostering hopeless dependency among drivers, reducing them to non-thinking automatons, a study says. Study author Rosamund Langston, behavioural neuroscientist at the University of Dundee, said that using the systems lulls the brain into a false sense of security meaning we keep one eye on the 'flashing arrow' instead of looking out of the window for vital reminders."

● Can GPS Help Your Brain Get Lost? Idea of the Day, New York Times, 19 Oct. 2009. "Increasing reliance on global positioning systems could damage our own internal sense of direction and have other unforeseen effects on the brain, neurological research suggests."

● Canadian Woman Found After Missing for 7-Weeks Is a Mother's Day Miracle. KTUU-TV, 8 May 2011. "A family's prayers are answered with the rescue of a missing mother, but the search continues for her husband in northeastern Nevada. 59-year-old Canadian Albert Chretien vanished in March, after his van got stuck in mud during a sightseeing trip. Deciding to leave his wife Rita in the van, he set off with a GPS for help."

● Canadian woman found in Nevada wilderness after 7 weeks by Keith Ridler, Associated Press, MercuryNews.com, 9 May 2011. Article includes photo of Albert and Rita Chretien. "BOISE, Idaho -- Mother's Day was a 'miracle' for Rita Chretien's family: The 56-year-old Canadian was rescued from a remote area of Nevada, where she nearly starved to death while stranded for seven weeks. The Penticton, British Columbia, resident was found Friday by hunters who spotted her van mired in mud on a national forest road in Elko County, Nev., near the Idaho border. Her husband, 59-year-old Albert Chretien, remains missing. He had set off on foot March 22 to get help."

● Missing Sherbrooke woman found safe: Woman blames GPS for getting lost en route to N.B. CBC News, 2 March 2011. "A Sherbrooke woman who was the object of an intense police search in Quebec and New Brunswick was found by snowmobilers Wednesday, some distance from her intended destination. Medical student Stephanie Parent, 22, was driving from her home to Bathurst, N.B. . . . She used her GPS system to navigate the route, but never got there . . . She told her rescuers she got lost when her GPS gave her the wrong instructions."

● 'I was only following satnav orders' is no defence: Driver who ended up teetering on cliff edge convicted of careless driving by Chris Brooke, DailyMail.co.uk, News, 16 Sept. 2009."The defendant was using a TomTom satellite-navigation system, Waseem Raja, prosecuting, told Calderdale magistrates. Robert Jones . . . said he had no reason not to trust his TomTom satnav. He followed that system to the letter, so much so, it led him up a lane clearly unsuitable for motor vehicles. The path was not designed for motor vehicles yet Mr Jones slavishly continued to follow the satnav system to the point where his eyes and his brain must have been telling him otherwise to such a degree he was not exercising proper control of the vehicle . . . Kevin Clinton, of the Royal Society for the Prevention of Accidents, said: Driving requires concentration and focus and road users should remember that they are the boss, not the satnav." 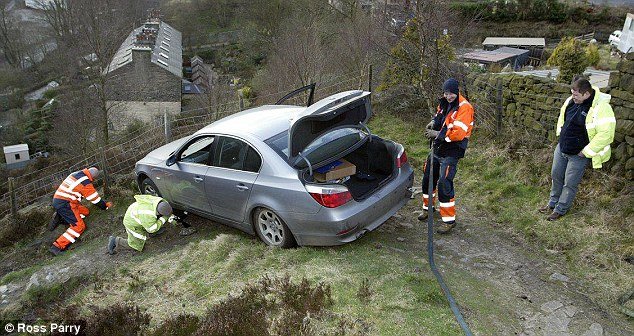 ● About to Fall to Your Death? Blame GPS by The News Team, Outside-Blog.away.com, 17 Sept. 2009. "Robert Jones was found guilty of driving without due care and attention for following his TomTom satellite-navigation system down an unpaved road and all the way to a cliff edge." ~ Aileen Torres.

● GPS Map Errors Explained from GPS.gov. Does your GPS device show your house in the wrong place? Does it suggest inappropriate routes? Don't blame the GPS satellites ... contact the map makers!

● How GPS Phones Work by Tracy V. Wilson, from HowStuffWorks.