Article printed on page 37 in the April 16-17, 2005 issue of
The Mississauga News under the feature: Health & Wellness, Medical Matters.

April is Cancer month, but it also heralds the onset of a truly unique Canadian experience: "The Hockey Tournament." Come April, teams of all ages, all denominations, men, and women travel far and near to participate in this phenomenon. For mature hockey players, it is the culmination of a season spent attempting to turn back the clock, and ward off the aging genies that constantly tug away at our bodies. I can personally attest that the hockey lockout was lifted in the Nations Capital on the weekend of April 7-9, 2005. It seems that a lot of things are being lifted in Ottawa these days, but that is another story. This year was full of difficult choices. I had to bid farewell to the Anon Sharks, my favorite ladies team, which I occasionally coached through the year, and board Ross Heller's Bioped Express with Dr. Fred Thibodeau at the helm bound for Ottawa, along with 45 other local doctors. It was time once again to defend the honor of Mississauga doctors, but more importantly to raise much needed funds for cancer support services. We received the blessing of Mrs. Nancy Bower while her husband, nicknamed "The China Wall", stood pondering. When I saw a distant tear in Johnny Bower's eye, I was truly moved by the sentimentality until I was informed that the root of such sadness stems from the realization that the city would be devoid of docs. Not a good weekend to get sick, I suppose. Thank goodness that the new immigrant doctors have not been bitten with the hockey bug yet, and a skeleton crew remained to hold the Alamo of local health care.

And so it came to be. The road trip to Ottawa began. A busload of middle aged doc-jocks and one ex-national level lady doc headed off to practice what we preach. For a short fleeting time, the immense stresses of medicine were traded for the immense stress of skating hard, shooting hard, and learning to take "time outs" from "young'un refs," half of whom I swear that I delivered into this world. The annual Docs on Ice Charity Hockey Tournament is in its 23rd year, raising much needed money for charities around the province. This year, almost 800 hockey playing doctors converged on the Nation's Capital to help raise money for cancer charities. The designated charity was Roger's House in honor of the late Ottawa Senators Coach, Roger Neilson. This facility is designed to provide palliative and support services for catastrophically ill children and their families. A similar initiative took place in Mississauga a few years earlier to raise money for Rose Cherry's Home for Kids. I was saddened to learn that the same companies that derive profit from the cancer industry declined to provide any charitable support at all, an unfortunate sign of the times.

The difference between doc hockey and regular tournaments is very minimal. Officials are sometimes maligned, abused and considered to be impaired while the opposition is a vile enemy to be beaten at all costs and yet they remain congenial colleagues off ice. Judging by the fire in the on-ice eyes of Dr. Grant Moore and Dr. Dave Palmer, I think a lot of local docs are seriously considering taking a shot as replacement players in next year's NHL. The tournaments have a scientific and educational component to them. This year's session appropriately reviewed the treatment of concussions. What a handy coincidence. The day before play was to begin, we were also treated to the statistical reality of how dangerous hockey can be to the once-a-week mature hockey player. The chance of adverse cardiac incidents increases 20 fold and more in this group. Playing three times a week reduces this risk significantly. When you make an allowance for all the dressing room cell phones, pagers, pills, saves, and stench-soaked equipment, doc hockey is just like any other, only the profanities are more eloquent. I hope that you too had a chance to experience a similar Canadian ritual to herald the onset of spring! I was surprised to see how many worthy charities receive support from this Canadian past time. The score really didn't matter, yet suffice it to say that Dr. Dennis Izukawa's "Trillium Titans" and my own "Tomahawks" brought the divisional trophies home where they belong; a small token of vindication for the IceDogs. 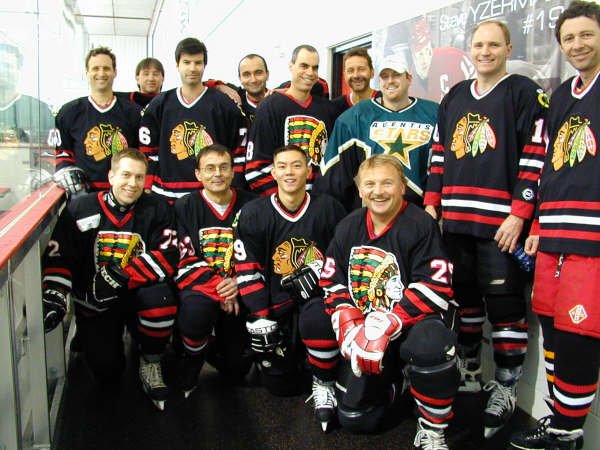 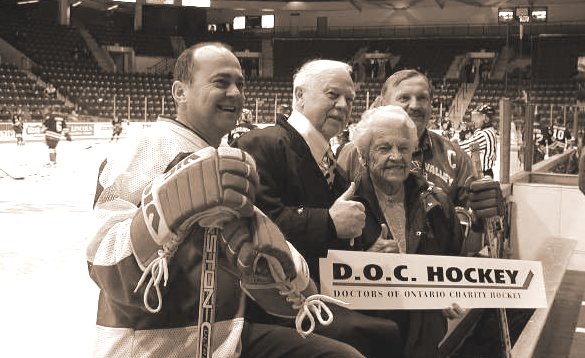