Docs On Ice 2008:
Please Support the Cause

Article printed on page 11
in the February 9-10, 2008 issue of The Mississauga News
under the feature: Health & Wellness, Medicine Matters.

Breast cancer can be beaten. It involves a collaboration of Family Physicians, Oncologists, Geneticists, and Radiologists, Patholigists and specialized nurses, counsellors, skilled technologists and others on the medical side. But it also requires the help of family members, friends, clergy and society as a whole.

A group of local doctors have decided to put their sticks where their stethoscopes are. Hockey simply got more votes than the Full-Monty Doctor Calendar. So, this Wednesday, February 13th, 2008, at 5 p.m. at the Hershey Centre, the Mississauga News and the St. Mike's Majors will be presenting "Docs On Ice".

My own Bandage Clad Blades coached by NHL great, Johnny Bower, have challenged Dr. Dennis Izukawa's Tyrannical Titans, coached by the legendary Dick Duff, to a duel on ice. The ice is sure to turn pink as we duel for the coveted Golden Bedpan with proceeds going to the Breast Cancer Foundation. For a mere $8.00, you can cheer on your favorite doc, raise funds for breast cancer, meet a famous Maple Leaf Stanley Cup Champion, and even stay to watch the St. Mike's Junior Game at no extra cost. And it's all thanks to Mr. Ron Lenyk of the Mississauga News, one of the most valuable, community spirited individuals in our city. Mr. Eugene Melnyk has also pledged to match every dollar raised for this noble cause. Together, we can make a difference. Donations can be made out to the Canadian Breast Cancer Foundation, and are tax deductible. They can be dropped off at the Mississauga News office. We hope to see you there! 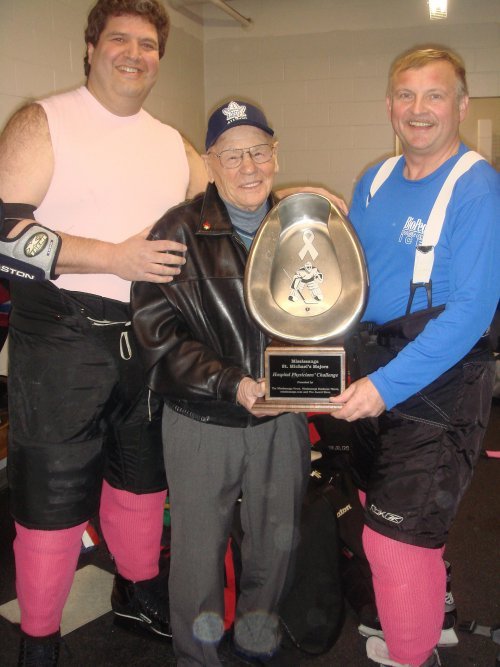 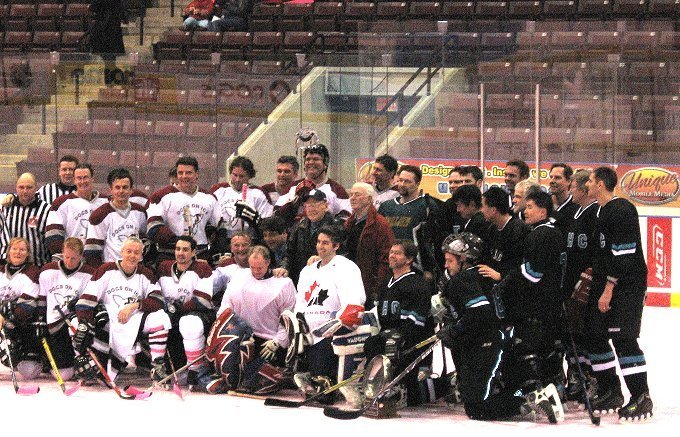 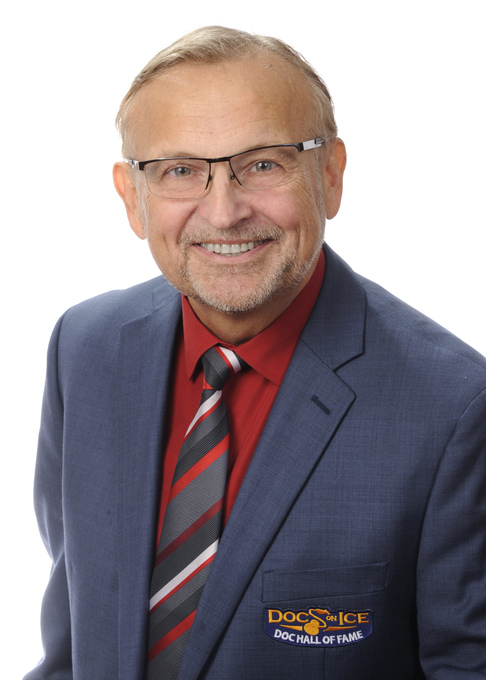 "On behalf of the Docs On Ice Provincial executive, we congratulate Dr. Pete Kujtan who has been a driving force behind the success of Docs On Ice for several decades. A tireless volunteer, leader, player and innovator, Dr. Kujtan has advanced the tournament and helped raise large sums for local charities all around the province. His dedication as a family physician is equally inspiring. He continued to help his patients during the initial phases of his recent cancer treatments. Docs On Ice would not exist today without the energy and enthusiasm of Dr. Peter Kujtan. ~ Congratulations from the Provincial Executive Committee."

Docs on Ice Hall of Fame: "Each year, a player is inducted into the Docs On Ice Hall of Fame. They are selected for demonstrating an outstanding contribution to Docs On Ice, and for displaying the true spirit of Doc Hockey, including sportsmanship, camaraderie, and fair play."

"The Binette Award is open to all players, rewarding the personality that makes a player a favorite teammate, opponent and citizen. The awardee will be a player who balances their own professional and recreational lives for the good of themselves and those around them including their greater community. They blend a competitive spirit with the higher principles of goodwill and respect for the wellbeing of others."

● The History of Docs on Ice includes photos of the original 8 Docs on Ice Teams in 1983. "Docs on Ice is an annual fundraising doctors hockey tournament that began in 1983. The tournament affirms the priciples of charity, camaraderie, and sportsmanship inspired by the memory of the late hockey player and Urologist Dr. Peter Howes.
The first tournament was held in Peterborough with 8 teams. Docs on Ice has grown over the last 35 years to include more than 800 physicians and 100 medical students, with 56 teams in 11 divisions from across Ontario and Quebec [in 2018].
Docs on Ice is hosted by a different city each year to bring doctors together to play hockey and to give back to the community by raising money and awareness for local charity ... All proceeds go directly to charity. To date, Docs on Ice has raised over $1 million dollars for charity." 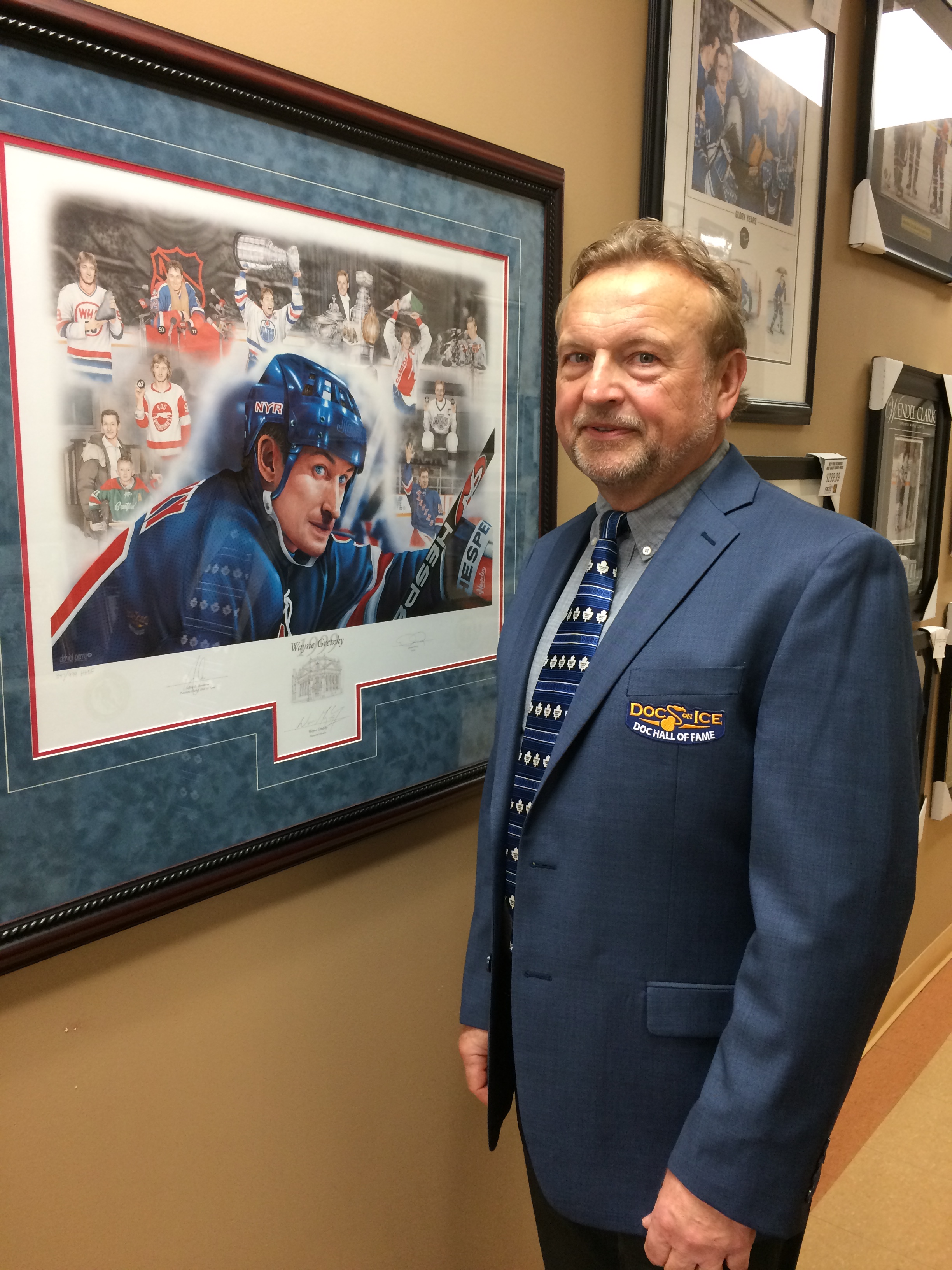 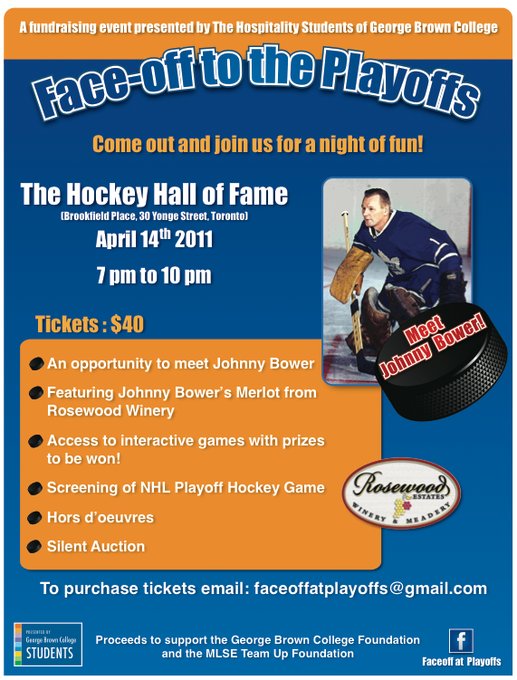 Face-off to the Playoffs. Image source: kujtan.ca/news
Come out and join us for a night of fun! Meet Johnny Bower!
At the Hockey Hall of Fame, 30 Yonge St. Toronto
Tuesday, April 14, 2011, 7:00 - 10:00 pm. Tickets: $40
Proceeds to support: The George Brown College Foundation, and
The MLSE (Maple Leaf Sports & Entertainment) Team Up Foundation

● Johnny Bower Gets His Goalie Pads Back . YouTube video, 2:26 min.

● Legends of Hockey - Johnny Bower. Bower ... became famous for his fearless play. Maskless, he never shied away from an attacking player and in fact patented the most dangerous move a goalie can make - the poke-check. ... After he retired in 1970 as the oldest goalie ever to play in the NHL, Bower remained with the Leafs for many years as a scout and then goalie coach, putting the pads on and helping Leaf goalies in practice.

● Docs On Ice (2010) coming to Clearview by Michael Gennings, Staff, Stayner Sun, Jun 30, 2009. "The Stayner Arena will be used during the 28th annual Docs On Ice Charity Hockey Tournament in April 2010, an event that will raise money for new medical equipment at Collingwood General and Marine Hospital."

● Docs lace up to help local charity. (Scroll down to read this article). April 13th, 2009 from Niagara Falls Review.

● Docs On Ice 2009 - Congratulations Champions. Doctors: Thibodeau, Binette, Clark, Depew, Hey, Owsianik, Kujtan, McClure, Reich and Connolly. "A special thank you to Marcel Dionne, Honorary Chair of Docs On Ice for his enthusiasm and dedication to hockey and Docs On Ice Niagara." Docs On Ice 2010 will be held in Collingwood, ON - April 8, 9, 10, 2010.

● Docs On Ice 2009. The 27th Annual Doctors of Ontario Charity Hockey Tournament will be held in Niagara Falls, April 16 to 18, 2009. This charity competition will host over 50 teams of doctor hockey players organized into nine divisions. Proceeds will benefit Heart Niagara and reduction of childhood obesity through its Healthy Heart Schools' Program. In 2009, a medical student division will be added to "give medical students the opportunity to experience physician hockey, network and support an important cause."

● Niagara is honoured to host the Docs On Ice 2009 events. "The tournament, now in its 27th year of competition, will host 50 plus teams organized into nine divisions. Tournament registration is $2,750 per team and includes: Thursday evening registration events, Round Robin hockey Friday and Saturday, a Gala Dinner Friday evening, as well as entertainment and commemorative gifts." Posted October 2008, Niagara Falls Review.

● Docs On Ice Charity Hockey Tournament (2008). "Thunder Bay is hosting 'Docs On Ice', the 26th Annual Doctors of Ontario Charity Hockey Tournament April 3-5, 2008. Come out to support the local docs of the Thunder Bay Blades as they face off against the Niagara team at 1:30 pm, Saturday, April 5th at the Fort William Gardens. Admission $2. Proceeds to support P.R.O. Kids and the Paediatric Unit at Thunder Bay Regional Health Sciences Centre. Dave 'The Hammer' Shultz will also be at the Gardens to sign autographs."

● Doctors take their game to the rink by Craig MacBride, Mississauga News, Feb. 8, 2008. Includes staff photo by Rob Beintema: "Credit Valley Hospital Doctors. They're putting down their stethoscopes and picking up hockey sticks. This team of doctors, playing for Credit Valley Hospital, will face off against a Trillium Health Centre team next week at the Hershey Centre to raise money for the fight against breast cancer."

● And the Golden Bedpan goes to ... from Mississauga News, 14 Feb. 2008. "Physicians from Mississauga's two hospitals strapped on the blades for some friendly competition and to raise funds for a good cause." Includes staff photo by Sabrina Byrnes: Dick Duff. Former National Hockey League great Dick Duff was the winning coach in last night's Hospital Physicians' Challenge hockey match at the Hershey Centre. The event coincided with Paint The Rink Pink night."

● Docs On Ice Hockey 2008 by Scott A. Sumner, Thunder Bay Business. "Over 500 doctors in 40 teams from across Ontario will visit Thunder Bay for Docs On Ice 2008, which will be held on April 3rd - 5th, 2008 at 6 arenas across the city ... proceeds from the tournament will support two local charities - P.R.O. Kids Thunder Bay and the Thunder Bay Regional Health Sciences Centre- Pediatrics Unit."

● Docs On Ice 2006: He Shoots and Shoots and Sometimes Scores! Article by Dr. Peter W. Kujtan.

● Pink ribbon from Wikipedia, the free encyclopedia. The pink ribbon is an international symbol of breast cancer awareness.

● Ribbons for a reason. Ribbons for a Reason specializes in awareness ribbons for every reason in over 56 colors. These colors support over a 100 different causes.

● List of awareness ribbons from Wikipedia, the free encyclopedia. Many groups have adopted ribbons as symbols of support or awareness. List shows meanings of different color ribbons.

● What Does That Awareness Ribbon Mean? Symbolism for 7+ Popular Colors by Alyssa Mertes.

● It is with great regret to inform you that Ron Lenyk passed away on September 14, 2015. See Ron "Zenko" Lenyk, Obituary.