Wintertime put an end to most of those activities. But then we had Sinterklaas to look forward to. December 6th was the big day. For many weeks, we learned the Sinterklaas song and now the big day arrived when he personally visited our school.

Last night, he came to all the houses when we were asleep. In our house, we prepared for his coming. We had our klompen filled with hay for his horse. Some kids who didn't know any better put straw in, but we could not blame them because they did not have a horse and could not know that a horse didn't eat straw. Sometimes we even put a carrot in with it. His (schimmel) white horse, really appreciated that.

Then in the morning, there was a race to the fireplace where our klompen were, to see what Sinterklaas brought us. You see, the klompen were always put below the chimney so Sinterklaas could easily find them, or actually not Sinterklaas, it was always (Zwarte Piet) Black Pete, on orders from Sinterklaas who came down the chimney and stuffed our klompen. Besides, if Sinterklaas would come down by himself he would be just as black as black Pete and that would be terrible. No, no. Oh, and how about his beautiful white horse, it would get all black too. That was why Sinterklaas hired Black Pete. Pete was from Africa, that was a far away land where all the people were black.

Sinterklaas was from Spain and when he asked Piet if he wanted to be his helper, Piet immediately accepted and was very honored to work for the good Bishop, even though he always had to walk.

Some people were sceptical and claimed that there was no such people as Sinterklaas and Black Pete, but me and my friends believed.

Although it made me kind of sad to see several kids got what they wanted from Sinterklaas. My sisters, brother, and I left a piece of paper with a request for a simple toy, like a little car, maybe a nice shining top, or a monkey on a string, but our wishes were never fulfilled. Little did I realize at the time, those toys cost money and my parents had to pay for them. But we always got some candy, some of it wrapped in very colorful wrappers. However, what we missed in toys and gifts, Ma made up with love. Many nights, I remember she came up to my bed and gave me what she called a neusje; we rubbed noses. 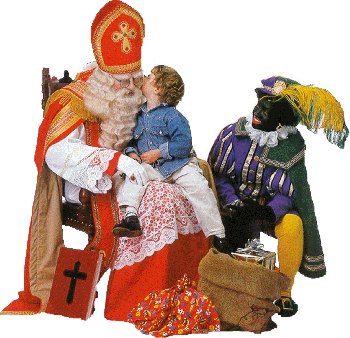