School year started and finished in April. The reason I believe is that when you get out of school the whole summer is ahead and it will be easier to find work.

In the beginning at this new school, it was kind of embarrassing to see all them strangers. I had to do a lot of looking: what sort of kids were these? Nobody was wearing wooden shoes, I was not either, because no one did here. They talked all fancy, and Ma said you had to talk like them too. I didn't like that way of life: they acted as if they were better than us country people. Would one call that "More sophisticated?" Maybe.

I was not alone. I found a boy who came from Spakenburg, that was a little fishing village on the Southern Sea. He also talked with a different accent, but not like ours.

Yes this here was not what I was accustomed to, but it's also interesting to meet boys who didn't know nothing about horses, or cows, or how to load a wagon with loose hay, without falling off. Their fathers worked in factories, on boats, in offices and all different kinds of jobs.

But before long we began to understand each other and actually became buddies. Classes here were not as easy as it had been at home. We had to learn how to handle a hammer, a saw, read blue prints and use letters for arithmetic called algebra. On top of that, we got homework, something we never had to do in grade school.

Life sure became more complicated. There must have been a couple of hundred students. There were so many that there was a teacher for every class. In our village school, we had two rooms. In one were grades one, five and six, in the other was Miss Kuntz with grades two, three and four.

Yes, maybe it was a little hard, but I got myself in it, so I was gonna make the best of it. If them city slickers could do it, by George, so could I. In the end, I guess I must have done alright, because at graduation time I came in, in the top four or five.

Our only entertainment was at noon. We had a whole hour recess. That's when we took off for the mountain: maybe it was not a real mountain, but we thought it was. We had a hard climb with the bike but getting there was a reward in itself. Here on top was a bald spot were we could play soccer, and a big huge beech tree. It was called our climbing tree, and climb we did, like monkeys from limb to limb and branch to branch. How nobody ever broke a leg or arm was a miracle.

The way back to school was another adventure. I had a good bike with a coaster brake, so no problem. But other boys who were not so equipped had to rely on the front wheel brake, which was a piece of hard rubber pushing down on the tire. The boys with no mechanical brakes took the front fender off. This way they could put their foot on top of the tire, and if you push hard enough it would slow down the bike, kind of hard on the shoe. But this of course was not the only place I travelled.

Amersfoort is a very old place dating back to the middle ages, when the tribes were always fighting each other, around 1300 to 1500 AD. They built strong walls around the city with a moat. Many parts of these walls are still in fair shape. We found one part with two towers and a bridge in between. Now if you had plenty of nerve, you could climb from the bridge, high above the water, into one of the towers. We dared each other, not realizing how stupid a person could be. A couple of us did make it. When I came back 60 years later, and saw what we had done, I could hardly believe that we had been that foolish. Everything is still the same except the window we climbed into is boarded shut and the few nails in the wall have rusted away. 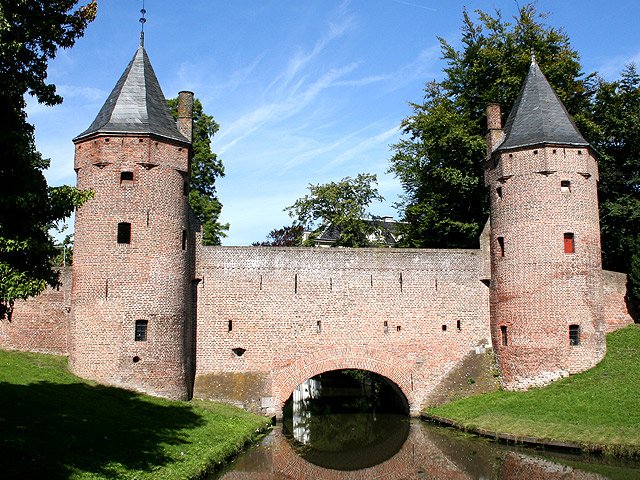