After I graduated from trade school in 1936, there were no jobs available anywhere, specially for a kid like me who did not know nothing.

The world was still in a deep depression, except maybe in Germany where a new fellow became head of state, and started to get things moving. By the way, his name was Hitler.

Probably because of Pa's excellent record as a hard working, dependable, honest individual for the last twenty years, they put me to work washing bottles.

We started at 7:30 a.m. and went home at 6 p.m. At noon, we had a two-hour rest period. We had to wait that long for the milk to be processed, bottles to be heated, etc. Then in the afternoon, the real job started. Boiling hot milk was tapped into hot bottles under pressure. I had to grab those bottles by the snap down top and heave them in big wooden troughs filled with hot water. It was a very demanding operation with no let up for about three hours. I had to be very careful as not to break them - I mean let them down gently and at the same time try to keep your hands from burning. Oh well, somebody had to do it, and I was getting paid for it too: $2.50 every week.

The second year on the job, I got promoted to more or less jack of all trades. I went with one of the trucks to make deliveries to out of town stores, to help load and unload cases of milk bottles. I learned to solder brass numbers on milk cans and fix leaks. I helped a steam fitter install steam and water pipes, and insulate them. I also got a raise and took home $3.50 a week, a 40% increase in one year. It was not enough to live on but at least I could buy my own clothes.

Board and room in those days was $7.50. Ma did not charge any. Beside these wages, we could drink all the milk we wanted.

Every Monday at noon, a wandering minstrel came to our plant. He would stay with us for an hour or more, singing and playing the accordion. The man was fantastic, but the depression got him too, so he wandered around picking up a few cents here and a nickel there.

At this time, a big expansion started at the plant. The scientist had invented a way to make wool out of milk. To do this, they built a good size addition with kettles, evaporators, rollers to make powdered milk, etc. To supply those hungry machines with steam power, they built a 45-meter high smoke stack. We sure enjoyed seeing this giant being built brick by brick.

What surprised me to start with was the outside was tapered but the inside was also tapered. Thus the opening at the bottom was much smaller than at the top. The brick layers worked from the inside, standing on a platform with a hole in the middle through which all the material got hoisted up.

Every day at noon when the men went for lunch, we took charge and climbed on to this platform. You could do this on the inside or the outside because they cemented U-shaped steel bars every certain distance.

Every day, the stack got a little higher, and every day, it got a little scarier. I started to wonder when we were gonna rip one of them U brackets out and fall backwards to where we started from: maybe 30 or 40 meters below and with what speed would you hit the ground.

When the structure was finally finished, they put a steel ring over the edge. Beside myself, there was only one other person who ever sat on top of this 45-meter tower. What an unbelievable sight: the people on the ground looked like two-legged ants. Even the big oak trees that lined the highway looked from here like shrubs. And the stack itself seemed to be much smaller on the bottom than here on top.

The cleaning and sterilization of milk bottles by Betty C. Hobbs, B.Sc., PH.D., DIP.BACT. and G. S. Wilson, M.D., F.R.C.P., D.P.H. London School of Hygiene and Tropical Medicine. "Under Article 21 of the Milk and Dairies Order, 1926, it is laid down that all vessels and appliances used or intended to be used for containing, measuring, or stirring milk, or for any other purpose for which they may be brought into contact with milk, shall be thoroughly washed as soon as may be after use, and shall be cleansed and scalded with boiling water or steam before they are used again."

"Hand-washing plants with steam sterilization: If the washing is done strictly by hand . . . 1) . . . bottles should be rinsed in warm water to remove the grosser milk residues.
(2) . . . then be washed in a weak solution of a suitable proprietary detergent maintained at a temperature of about 110° F. . . .
(3) . . . bottles should be rinsed with cold main water to remove the excess of detergent.
(4) . . . should then be transferred in the inverted position to freshly washed crates, packed into a chamber, and sterilized by steam. During this process it is important
(a) to allow the temperature of the bottles to rise to 200-210° F.,
(b) to maintain this temperature for at least 10 min., and
(c) to permit the bottles to cool down gradually."

Heat Treatments and Pasteurization from Cornell University. "Pasteurization is the process of heating a liquid to below the boiling point to destroy microorganisms." 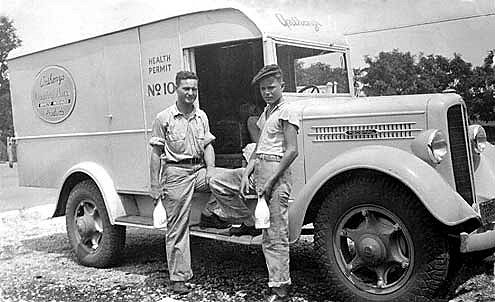 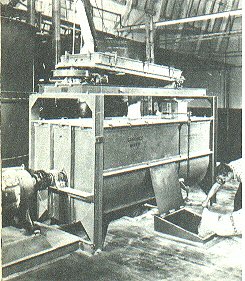 Vintage Fabrics - In Search of Warp Ends by Joan Kiplinger. Meet the Azlons from A to Z: Regenerated & Rejuvenated. Casein [milk] protein. "Lanital was the first successful protein fiber from milk casein. Antonio Feretti was granted a patent for this fiber from the Italian government in 1935. It was named Lanital [lana=wool + ital=Italy], and manufactured by Snia Viscosa which called the fabric a fancy rayon . . . A patent was granted in 1937 to the United States Department of Agriculture for making a casein fiber by a somewhat different method than Lanital. Aralac was developed by the American Research Associates (ARA) . . . and was ready for the market in 1940, just in time to serve as a wool substitue during WWII. Its name was derived from ARA + lac=Latin for milk."

What is milk fiber? According to Euroflax Industries, milk fiber was invented in 1930's in both Italy and America and was called "milk casein."

Wear milk if you can't drink it (Milk Yarn).

Milk (Casein) Fiber Yarns & Blends. "Casein dates back many centuries when it was used as a binder for paints. Many 14th and 15th century churches that were painted with casein based paints still appear bright and unfaded even to this day. Milk fiber was invented in the1930's in Italy and America to compete with wool."