In the village, several people who kept bees agreed that it was a good idea to transport the bees to the hei (a very coarse hard plant with many tiny flowers which contain a certain ingredient which the bees make honey from. Dutch "hei" = English "heath"). This was a useless field where nothing else would grow. There were no houses, no trees, just a big open field way above sea level and all sand. In July, Pa, because he was the only one who had a flatbed wagon with springs, would take a wagonload with hives up there. In August, he would haul them back. This always was a glorious day for me. No school for a whole month and now with Dad to the hei. Hurrah.

The evening before the big haul, one of the beekeepers had to go over to the hives to plug all the holes and put the burlaps under each one so the bees would come home too.

It was kind of a restless night and a long night, but finally day broke and I was ready to go. But whoa! First the horse had to be fed and we had to have something to eat. "Oh, I'm sorry, dad, I forgot." Who would think about eating on a day like this.

Finally, the horse was hitched and everything was ready to go. It must be a far and strange land where we're off to. I had asked Mama where the HEI was, but she did not know. She had never been there, she only knew it was high and dry. Did that mean there was no water in the ditches? Ma said there were no ditches. What, no ditches? But that did not seem possible - a land where you could walk without falling in a ditch even in the dark? Where was this land, Pa? Pa waved his arm in a northerly direction, "Yonder, son." Wow, was that on the other side of the railroad tracks?

Yes, much further - it was in the direction where the airplanes roared. This was totally beyond my comprehension. Sure we heard many times the sound of airplane engines from Soesterberg, a military airport, but it was too far away to ever see them. And now we were going in that direction.

It was a wide wagon - not one of the kind most farmers had, the narrow ones where you had to sit behind the horse. No, ours was so wide that if you sat on the corner you could look right past old BROWN (the horse). And look I did.

The first kilometer wasn't too exciting because the church was one km and the school just past that which I was very familiar with. Of course I had to glance around to see if any of my friends were aware that I was going on a long journey.

Past the boys school, things started to unfold. After a couple of bends in the road, we came to the toll. This was the road crossing and of course the main hangout in the village. The blacksmith who lived on the corner took care of the toll revenue, but since we were citizens, we were exempt. Either the smith himself or his helper rushed out to let us through. It made me feel kind of good having a grown up man come out to let us through.

Soon we passed the town hall, this was a big house you had to look up to with respect. It was where the Mayor had his office and people were working there who wore Sunday clothes all the time and shoes every day. And they all had nice shiny bicycles. And above all, the (veldwachter) policeman lived there.

Behind the big house was the (brandweer) fire station with a beautiful fire truck, all painted red and gold and an enormous amount of hoses hanging all over. But there was no fire, so BROWN clip clopped along. He clopped on his four steel shoes and the wooden wheels with steel rims rattled on. But all of a sudden, there was a change in the sound. The horseshoes made a different sound, and I couldn't hear the wagon wheels anymore. I asked Pa what was wrong. He said nothing was wrong, we were now riding on an asphalt road which was very quiet. I liked that. It was so smooth and still that if you didn't hear the horse walking you would think you were standing still.

Very soon, we came to where the railway crossed the road. Aha, the railway. I had been longing to see a train up close all my life. But no luck. There was a double track going both ways but as far as we could see, no train. I had never seen anything so straight and long. I wondered how far it went? All the way to the end of the world? But how far was that? From our house we could hear the trains go by when the weather was still and sometimes we heard their whistles too. How I longed to see one up close.

I laid down on my back on a folded up jute sack and stared up in the sky dreaming of all the wonderful things in this world. While I saw the branches of the trees slowly pass by, I wonder what was at the end of the railroad track, and millions of other questions entered my mind.

But soon I detected something was different, but what was it? Then it hit me. The smell was different. I jumped up and looked around. Our trip led us through a forest with big oak and beech trees, just like they were pictured in the story of (Roodkapje en de wolf) Little Red Riding Hood and the Big Bad Wolf. The trees looked so huge and big, they must be a thousand years old.

Next, we crossed a big highway. Pa said you had to be very careful, cars and trucks came down this road at enormous speed. Now our BROWN was not afraid of traffic at all. He went on the big highway to the dairy every day. But BLACKY, the horse that belonged to our neighbour across the road, was a different story. They didn't dare take that stupid horse to town at all. The horse would go crazy if a car or truck would blow its horn - he would pretty well jump out of his skin.

Safely across the intersection, we came to a bush with all pine trees. The trees looked kind of funny to me with no leaves. I had seen pictures of them but they weren't quite as I had expected them to look like. But I sure liked the smell and it was different from anything I had ever sniffed before. After what seemed like an endless stretch, we came to a junction where we turned left. This was called Old Leusden and old it was for sure. 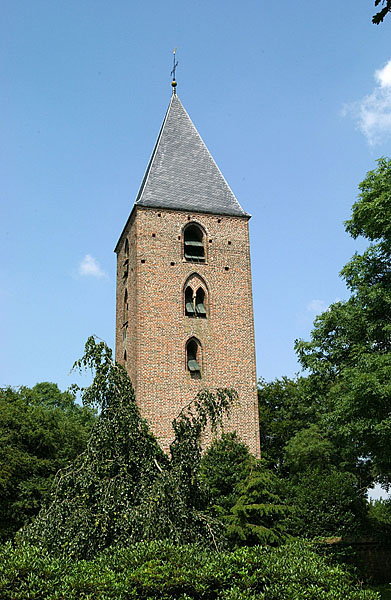 There was a square tower which looked fat but wasn't very high. I asked Pa what it was. He said, "That was a church, but the church part burned down a couple of hundred years ago. The tower is the only thing that is still standing." Later we found out that this church was built in 1200 A.D.

After a couple more bends in the road, we came to the HEI. Man, what an enormous vast tract of land. As far as I could see there was nothing but gentle rolling hills, covered with this here hard, prickly, ugly looking scrub. Was this where the bees get their honey from? Yes, I saw it did have a lot of tiny little flowers. I sure did have a lot of respect for what the bees could accomplish.

Our trip home was not as eye popping as on the way down because the road had become already somewhat familiar. We delivered the hives to the different beekeepers, where they would keep the bees locked in for awhile so that they would settle down from all the shaking they experienced during the trip. By the way, the total distance we travelled on that trip was 16 km. At that age, the world was awfully big.