When I got to be 6 years old, it was time to go to school. This was quite an experience.

Ma got me all decked out with clean hand-me-downs and away I went. My older brother Jan was supposed to take me down but I did not think it was necessary to wait for him. What did he think, that I didn't know where the school was? Ha, I'd gone past it many times when I went to the blacksmith to get old BROWN new shoes with father.

Going to school was kind of important I thought. Up until now I was only able to look at pictures and guess what it said. Now I realized if I did my best to learn, I would be able to send secret messages and everything.

The school was a big one. It had 3 rooms. One room was empty, one room had Grades 2, 3, and 4 with Miss Kuntz as the teacher, and the third room, which I was in, had Grades 1, 5, and 6. Meester Pijpers was our boss, alias the SNOR (moustache).

First, we had to learn how to hold a pen in our right hand. From scratching it slowly, we slowly went to drawing and writing and trouble.

One time when I finished the job I was supposed to do, I got out of my seat. Our seats were all double and my side was next to the wall with an aisle in between. So I positioned my back against the wall, then I lifted one foot upon the seat and then the other. By pushing hard, I suspended myself in the air and formed a bridge.

Of course, I thought this was a fantastic stunt. It had never been done that I knew of. However, the SNOR (teacher) did not appreciate it a bit. At the time, he was demonstrating to the boys in Grades 5 and 6 how to bend a glass tube over a flame. When he heard the approving sounds of the boys around me, he looked over to see what it was all about and the tube that was supposed to bend, broke instead with a snap.

I didn't blame the teacher for taking it out on me. After all I had no business showing off in the classroom. At the time, I thought it was more important to let the world know that there was more to life than sitting meekly in the pew to wait for your next assignment.

The teacher's favorite punishment was to make the culprit stand in the corner of the classroom facing the wall with his hands up in the air. If you did not keep your hands high enough, he placed a book in them so you had to keep that up as well. If that was not high enough in his opinion, he made it two or three books. One real rebel, who certainly was not the teacher's pet, was subjected to many of these cruelties. He let the books rest on his head. Then, when the SNOR piled more books on top he would let them slide off and plop on the floor, to the hilarious excitement of the class. We always figured he was a mean person but he sure did keep discipline among his pupils.

In the following class, the Miss never roughed us up. She kept control with promises of rewards and inklings of the good things that would come to us if we behaved ourselves.

When Miss got sick one time, we got a substitute - an old fellow. We had a hilarious time with him. Miss would always sit on a high chair in front of the class, but this fellow sat on a regular chair. It was too low for him to see what went on towards the back. Pretty soon, the projectiles started to fly. Pieces of paper were being shot at anything and everywhere.

To catch the culprit, he had to see who it was, or rather who they were. When he stood up, everything was peaceful and everyone was working. He had to think up another strategy. Pretty soon, the artillery came again. So the teacher crawled along the aisles between the seats. However this didn't lead to any arrests because the guys who saw him coming made such weird noises that the bombardiers would stop working when he might be able to spy them.

We had 15 minutes recreation in the morning and again in the afternoon. We could not leave the playground, which was surrounded by a steel fence with barbed wire on top, during that time. There were two trees in the middle of the playground which were protected by 4 poles in a square around each tree and wrapped with 6 strands of barbwire. Several boys got their hands and arms cut and their clothing torn but that was the price you paid for not watching. 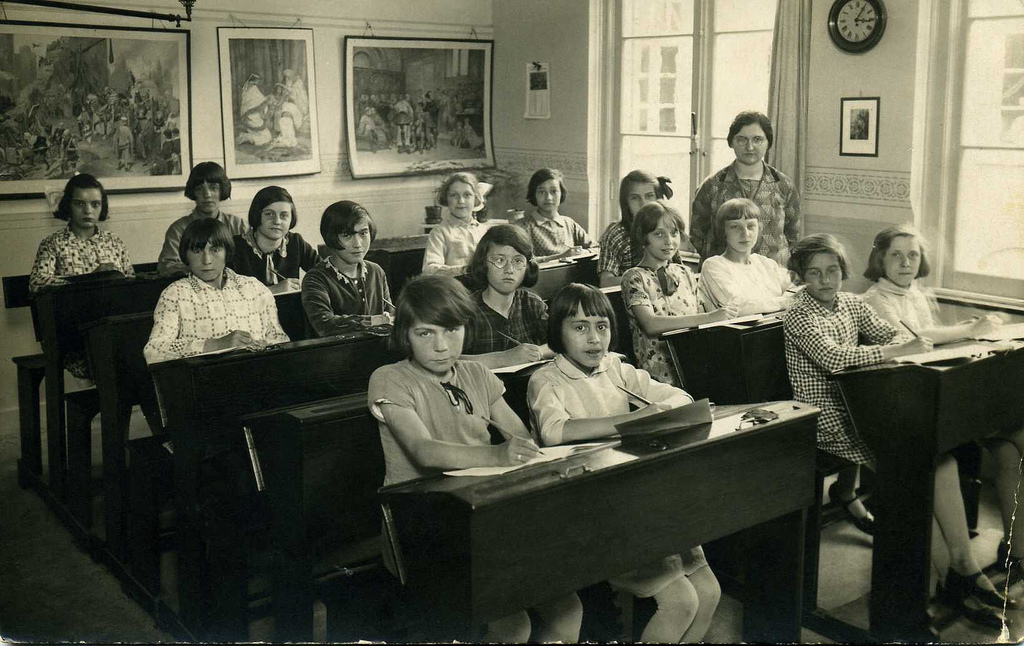 Credits: Photo by Willem van der Groef, Sr. (1920, Middelharnis - 1984, Den Haag, Holland), Photostream
"This school picture was taken more than 75 years ago, in or around the year 1930,
of probably the sixth primary school class of the former catholic St. Willibrordus girls' school
at the Hekkelaan near the Zwarteweg in the city of The Hague in the country of the Netherlands."
More details.