Chapter 106: My Own Tractor

At the time we did not have any use for it, but as soon as I got time, I built a two-wheel trailer. When Doc shut down the camp, and the lake froze over, we got to work.

Tractor, trailer, ropes, saw and axe and Margaret, we all headed for an island with many good sized dead trees. We cut a load, dragged them to the trailer, when loaded putt, putt, putt over the lake going home. This was the first thing we did before the snow became too deep for those vehicles.

Mr. Matthews from the only store in winter, asked if we would cut firewood for him. "Sure thing if you can supply me with a buzz saw." He did, and I spent several days cutting wood with the Case.

The next business was filling ice houses. Having no refrigerators, all the camps had ice boxes in their cabins. We kept track of these and when the ice melted, we supplied them with a new chunk. We had to wait until the ice crust on the lake was about one meter thick. Then we chopped a hole through, and with a 2-meter long saw, cut square blocks.

Cecil, my old boss, had a power circular saw on runners with which he cut partly into the ice, then the blocks broke off nice and square. I was not that well equipped, so we pumped this big saw up and down with the same result. It took a little more time but so what: there was plenty of it, and it's not very expensive.

A ramp from the ice house into the lake was a feature of every house. A ditch was cut into it. The tractor would pull the blocks into the building using a rope and a pulley on the far wall. Then all the blocks had to be covered with a big blanket of sawdust, and the sides too. Here, the ice stayed good all through the hot summer. When needed, we chopped some off with special three-pointed picks.

Sometimes it got real cold in Sioux Narrows. One morning, the oil in the tractor was so cold and thick, the starter could not turn the engine. I thought if I built a fire underneath it, that would fix it. A half hour later, it started like summer time. However, when I let the clutch out, the engine stalled. I tried several times with the same story: stalling.

Now I have to build a fire under the transmission, and yes, that did it. The clutch got such a beating that morning that we had to replace it soon after. When I checked the temperature that morning, it was nearly 50 below Fahrenheit. Margaret kept track in January 1951, an especially cold month. She found that not one day did the temperature rise above 30 below F. There were two mornings around sun up when the mercury dropped to 65 below F. Those were dangerous days for getting too cold.

Old Charley did not work any more, so he came around often to see what was cooking. One day I said, "Your cheeks are all white." "Oh, good Lord," he said, "thank you." He touched his face and realized they were frozen.

I had the misfortune once of frozen ear lobes: they were peeking out from under my cap with ear muffs. I never felt it until I felt nothing. I was warned before, it could happen very easily. So when I touched my earlobes and there was no response, I knew it was too late. Getting to a warm place was when you started paying for your carelessness. When the feeling came back, they felt numb. Then a tingling sensation, and soon it started hurting real, real bad. The frozen parts expanded to about three times the normal size. It never happened to me again, I learned a lesson.

What I found was when it got colder than 30 degrees below Fahrenheit, there was no more wind.

In those days, everybody smoked, yes, including me, sorry to say. When the smoke spiralled straight up, you knew it was cold. If it drifted one way or the other, it was above 30 below. I don't know of any other place like that. Although maybe Sioux Narrows was for you. There're always two sides to a story, they say. Well, here's the good part about Sioux Narrows: from October till June, no mosquitos, no bugs; from November till May: no rain, no drizzly weather, but lots of snow and sunshine. We had days in May of 70 degrees, then at night dropped to 30 below.

Sioux Narrows from Lake of the Woods. "Sioux Narrows is where all the magic begins. The crystal clear waterways are a fishermen's haven for walleye, northern pike, musky, smallmouth and largemouth bass, and lake trout; as well as a vacationer's retreat to swim and relax on one of the many pristine sandy beaches.

Our rugged boreal forest nestled within the Canadian Shield is abundant with deer, bear, moose and duck to test the most avid of hunters. Enjoy scenic hikes through our woods rich with nature ... Vacationers will find everything they need within an easy reach from world-class resorts, houseboat rentals, camping, RV Parks, and much more ...

A new bridge was completed in 2007 to replace the original wooden bridge that was once the longest single span wooden bridge in the world. With its signature wooden trusses incorporated into the design, the new bridge preserves the look and historical significance of the magic in Sioux Narrows."

History of Sioux Narrows-Nestor Falls, Ontario, Canada from Wikopedia. "Sioux Narrows is a small resort community located on the shores of Lake of the Woods where Highway 71 crosses the eponymous narrows to Regina Bay. There are about 300 permanent residents, and about double that in the summer time when cottagers from Ontario, Manitoba, and the United States come for vacation. Tourism is the primary industry, with many resorts in the nearby vicinity.

In the mid-18th century, an Ojibwa-Cree alliance is said to have defeated an invading party of Sioux at a narrows here on the lake. Sioux Narrows is named in recognition of that event. The Sioux Narrows Bridge, a historic structure on Highway 71 which was reconstructed in 2007, overlooks the site of the battle." 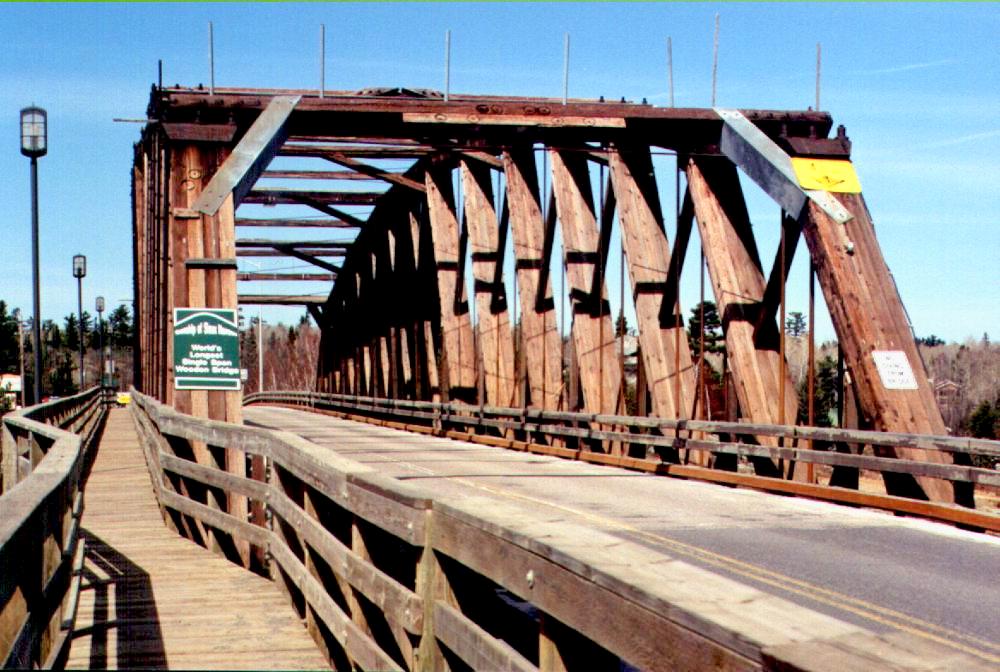 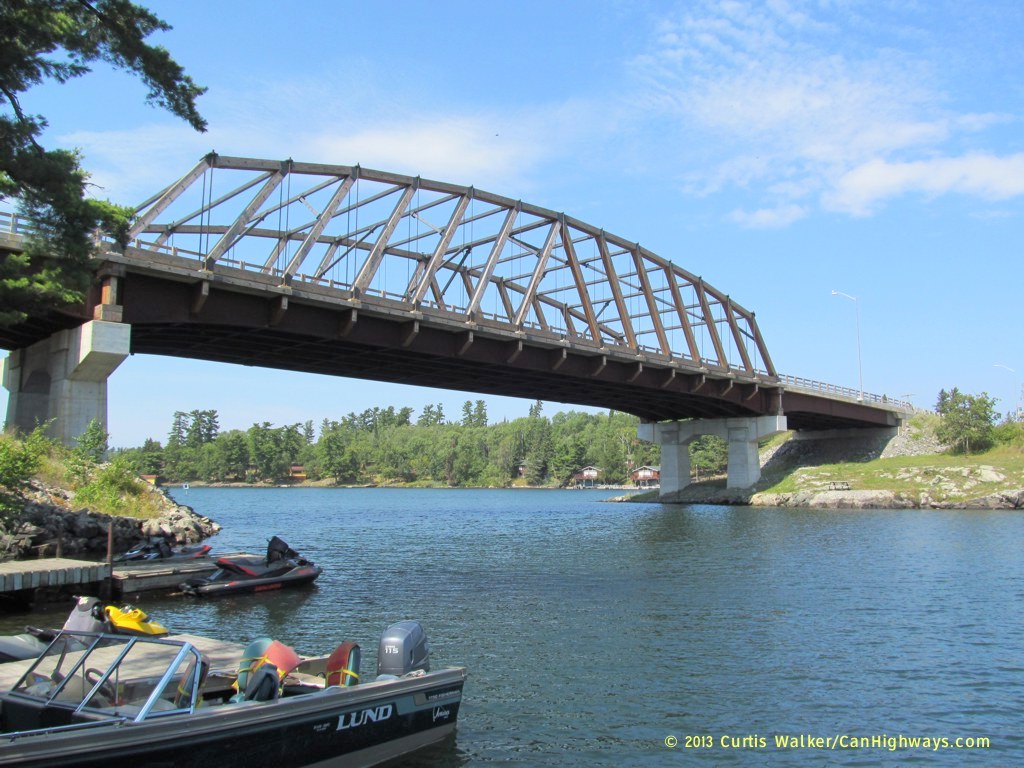 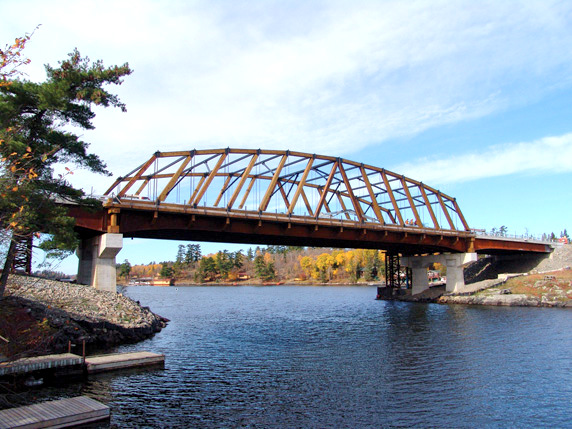 Sioux Narrows Bridge from Wikipedia."Built in 1936 as an all-wooden truss bridge made of Douglas fir timber treated with creosote, it was at 210 feet (64 m) the longest single-span wooden bridge in North America ... Due to its unique construction, the bridge was designated a heritage site under the Ontario Heritage Act ...

In the 1990s and early 2000s, the deteriorating quality of the structure necessitated load and lane restrictions on the bridge, with heavy trucking vehicles forced to detour via Ontario Highway 502 through Dryden or Ontario Highway 622 through Atikokan. Finally, a temporary bridge was built in 2003, and the wooden bridge was dismantled ... Construction began on the new bridge in 2006, and the bridge was reopened to traffic in November 2007."