Our daily meals consisted of rye bread which was pretty near black and very heavy, with a slice of smoked bacon and a half slice of homemade white bread. Oh, how I hated it.

Sometimes, this combination wasn't too bad - that's when the bacon was cooked nice and soft so that you didn't have to chew and grind and pull to take a bite of the bacon. Sometimes, Ma let us have a snack which was a slice of rye bread with lard and salt. Coffee we never got, Ma said it was bad for children. So we drank skim milk. There was always enough of that - you see Ma always had a cow and usually a goat and they had to be milked twice a day.

The whole milk went with Pa to the dairy - they took the cream out of it and returned the skim milk. Most farmers used it to fatten the pigs, but Ma used it for making soup, baking bread and to fatten us kids.

At noon, we mostly got 'stamppot'. This was a mixture of beans, potatoes, bacon, vegetables, carrots and what have you.

For dessert, Pa got soup and we got a cup of skim milk.

For supper, which was not a big meal, we ate bread with bacon, of course - rye bread and a half slice of white.

Friday was a different day: no bacon. Instead of the bacon, we got a slice of apple or sometimes cheese. At noon, for the warm meal, we got pancakes which we loved.

Sunday was also a special day - that's when we got rice cooked in skim milk with a measured amount of brown sugar.

We never had the feeling that we had to eat the same old thing over and over. Heck, no - sometimes those meals were interrupted by something we REALLY hated, like 'boerenkool' (farmer's cabbage) or white cabbage.

At Easter, we feasted as never before. That was the time of Easter eggs. Ma had around 200 chicks. The eggs she collected were sent with the local cartage, a one-horse covered wagon, to the city 5 km away. Ma went every Friday with the bike to the egg market and sold them to the city folks. With the money, she could buy salt, sugar, flour, yarn, cloth and other stuff which kept a household going. However, at Easter, we all got an egg boiled just the way we loved it.

Yes, Easter was a time to look forward to because before Easter was Lent which was a time of fast and restriction. All during Lent, we were instructed not to eat but to save our candy until Easter. We made a game out of it to see who could save the most.

Candies were not too hard to get. Every time we did something for somebody we got paid with sweets. If we went to the store to get something for our parents, the storekeeper gave us one or two candies. If strangers or uncles or aunts dropped in, we got candies. So we got quite a lot by the time Easter rolled around. Then it was time for trading, counting and gorging. 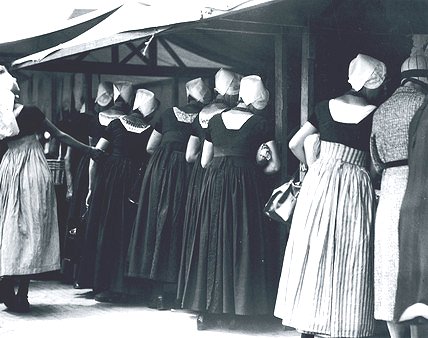 Women in traditional Dutch dress at a market, Holland, c1920s

Boerenkool from EcoBioLiving. Info on Boerenkool or Kale in Dutch with English translation.
"Waarom boerenkool zo gezond is... (Why is kale so healthy ...)

Boerenkool is rijk aan ijzer (Kale is rich in iron)

Boerenkool bevat veel vitamine A (Kale is rich in vitamin A)