Later on in the summer when all our aunts and uncles came for a family reunion, they all brought with them a bag with candies. All except Uncle Rick, that was. He was so stingy, he never ever brought anything. So my older brother and sisters conspired to talk me into asking Uncle Rick for the candy. They didn't dare do it themselves. I didn't either but they finally sucked me into doing it. They said he had the candy with him but just forgot to give it. They also promised that I could pick out the biggest one for myself. Well, after enough coaching, I finally got the courage to ask him.

The answer, of course, was "I haven't any." I remember that set off a flood of tears and screams. They led me to the back of the house to cool off.

It MUST have embarrassed Uncle Rick, but if it did, it sure did not show through his thick skin. He was the only Uncle we totally lost track of. We were never invited to his farm, in fact, I don't even know if he ever died. 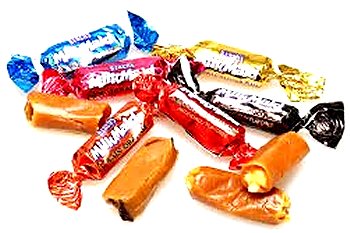 Brach's Milk Maid Royals
have been made since the late 1920s