In my grade school days during the summer, on Sundays, I went exploring with my best friend, Job den Ouden.

Our favorite place was past the public school, along a one km dirt road that led us to an old army defence dike. It looked like it was abandoned a hundred years ago or something. It was all built out of dirt and it was high and dry. That was fantastic because here we could dig in the sand and it would not fill in with water right away and nobody would chase us away and we could come back next week and our tunnels and castles would still be there.

Next to this here dirt road was a bush with huge beech trees. They must have been planted hundreds of years ago, because they were in a perfectly straight line. They were so big that the two of us could not join our hands around their trunks.

In the fall, we would collect their fruits: golfball sized prickly nuts. We broke them apart and found three neatly packed nuts inside. You had to tear the outside off them little things to get at the delicious tasting nuts inside. It was a lot of work but well worth the effort.

Next to our house was the Kuipersgracht (Coopers Ditch). It was about five or six meters wide. In the summertime when the weather got hot, not only us but a lot of friends came to splatter in the water.

In the first part where the water came through the culvert, the bottom was all sandy and so a nice place to cavort. We made sailing ships out of old wooden shoes and all kinds of other make-believe vessels. One time we got a half wooden barrel - the kind Ma used for the laundry - and pretended it was a real ship. One of us would climb in while the others kept it steady, then we shoved off into midstream, but alas as soon as the helping hands let go, the dang thing tipped over.

Of course accusations of poor seamanship, unstable hands and carelessness were exchanged. But when the next crew took command, the same thing happened, until we were all totally drenched. Then everyone was on an even keel again.

Once when everyone was soaked, we just naturally pealed off all our clothes and jumped around totally naked. That, however, only happened once. Word got around quickly. From then on there were no more nude parties for us, or for anyone else for that matter.

Then came the time when I thought I was big enough to ride a bike. The son of the blacksmith was able to ride a bike before he went to school - something unheard of. We only had one bicycle in the family. Ma used it on Friday to go to the market which was 5 km away. On Sundays everyone walked everywhere - to the store, to the baker.

It was quite a struggle to master this big wobbly contraption. Of course I could not reach the pedals while sitting on the seat, so I stood on them trying to maintain balance and at the same time urging them to go forward. Numerous falls later and with the help of sis Annie, who was the only one to help me, I took off by myself one night in the bright moonlight.

Oh what a wonderful feeling to go faster than I had ever before travelled all by myself. That night the world opened before me. I imagined that with a bike one could go anywhere - to the big city of Amersfoort, maybe even further.

That summer again there was a family reunion at our house. Most uncles and aunts came from far away with bicycles. One of them, Tante Geertje had a bike with a rigid chain drive. The others all had freewheelers. I figured if I took her bike I could sit on the back carrier and if I could reach the handlebars, I would be able to take it for a spin.

Well I waited till everybody was in the house having a good time. When the coast was clear, I grabbed the thing and pointed it down the road. I had a hard time mounting it, but finally got it going. In fact it was much tougher than I expected. My legs were too short to go around with the pedals. Even though I could only touch the pedals some of the time, they came back around to my feet on every revolution because of the rigid drive.

But soon there came a time when the fingertips of my left hand lost their grip on the handlebars. In one sweep, I headed for the ditch. My last thoughts were "There he goes!" Unable to do anything, it seemed like the ditch came towards me in slow motion and in I went.

What happened next was a blank. I must have lost consciousness, because when I came to, I was standing on dry land, crying and trying to get the mud out of my eyes. Other people were there too but I didn't know who or how many. Next thing I remembered I was totally stripped of my muddy clothes and Pa was throwing pails of cold water over me to get the mud off. Another good day all gone awry. 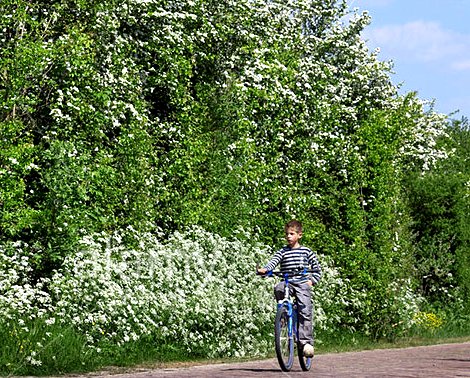