Pa did not want to buy another horse. He realized that the age of the automobile was here. Cars and trucks became a common sight. Also, the business was expanding: people asked Pa to haul stuff because he was the only one in the village who had a flatbed wagon.

So the decision was made to buy a truck, but which one? Dealers from the city got wind of it that Dad was in the market, so they came around with stories about how good their truck was.

One fellow came and showed beautiful pictures of a truck already loaded with milk cans. The name of this contraption, I mean truck, was WHIPPET. The WHIPPET did not make it to the final decision since it was not very well known.

FORD had a four cylinder which made a lot of noise and scared many horses. But CHEVROLET had a six cylinder motor, relatively quiet, and Ma said, "The dealer Henry Nefkins is Catholic and very likely can be trusted."

Included in the price of f1800, were instructions: how to take care of this modern marvel, where to buy gasoline and driving lessons.

The truck came with a spare tire, a jack and some wrenches, but no seat, no cab, no windshield and no wipers. But this was normal, only cars came with a closed in driving compartment.

On the recommendation of the dealer, Pa took it to a well known wagonmaker who built a fine cab on it, and a flat bed with low sides. The side windows could be opened by letting the glass, with wood frame, slide down into the door hanging on a leather strap. The man also put a nice seat on top of the gas tank. It sure was beautiful with all the woodwork varnished, and the steel parts painted a shiny black. With a modern truck like this, we became the conversation of the district.

There were only two other trucks, one belonged to Teus Hilhorst: he distributed feed to the farmers, and the other was owned by the dairy "The Vooruitgang" and driven by Doris van de Pol. He did the same work as Pa; his route started where our route ended.

Both those contraptions made lots of noise, so much so that when they came down the road, many farmers jumped off their wagon to grab the horse by its head and hold them till the truck was past. Ha, people said, in a couple of years, yours will rattle just like them others. Well I thought, "Ha, you farmers don't know the difference between a four or six cylinder."

This was really a modern machine, because it had an electric starter, you did not have to go to the front of the vehicle to crank it to get it to move. Now Pa did not have to sit in the rain any more when he had to go out to work. 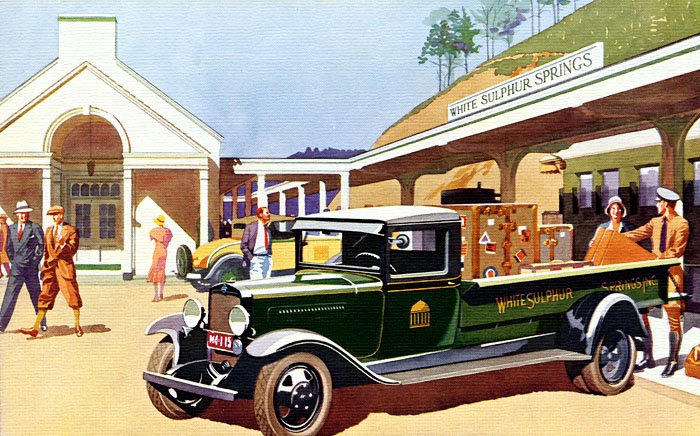