Chapter 37. Onto the Harbor

This always was also a busy place. Not much room here to watch, this the beginning of the river or the end, depends which way you travel. Here is the "Kamperbinnenpoort" a very strong wall with a couple of doors, which could be closed to keep unwanted ships out of the city in the olden days. Two towers with ramparts above kept the citizens safe from intruders.

Both sides of the harbor were occupied with warehouses, in here was where the little ships stored their cargo mostly. But sometimes when a load of fertilizer came in, it was immediately unloaded onto trucks and wagons.

Now Dad had a truck, he was called upon to help cart away the bags as soon as possible. I thought those were real men who did the hard labor. Each bag weighed 100 kilos: two men would grab one and heave it on top of the shoulders of a third who would carry this up the ladder, out of the boat and drop it on the truck.

This was a very high paid job: 10 cents per bag, but very few, if any, lasted a whole day. But not to worry, many others were waiting if one dropped out.

Those ships, or barges were all private. The owner and his wife and sometimes children called it home.

Also on board was a special breed of dog, called "Keeshond", developed by Dutchmen for the purpose of protecting ship and contents: a tough looking creature with a 360 degree loop in its tail.

Holland, being a land of water, several big rivers make their way through the land on their rush to the North Sea, the Rhine, Ijsel, Waal, Lek, etc. In the old days, those rivers were the highways deep into Europe. Trains and to some extent trucks taking away a lot of the trade, but the boats keep on hauling, because no one can beat their price. 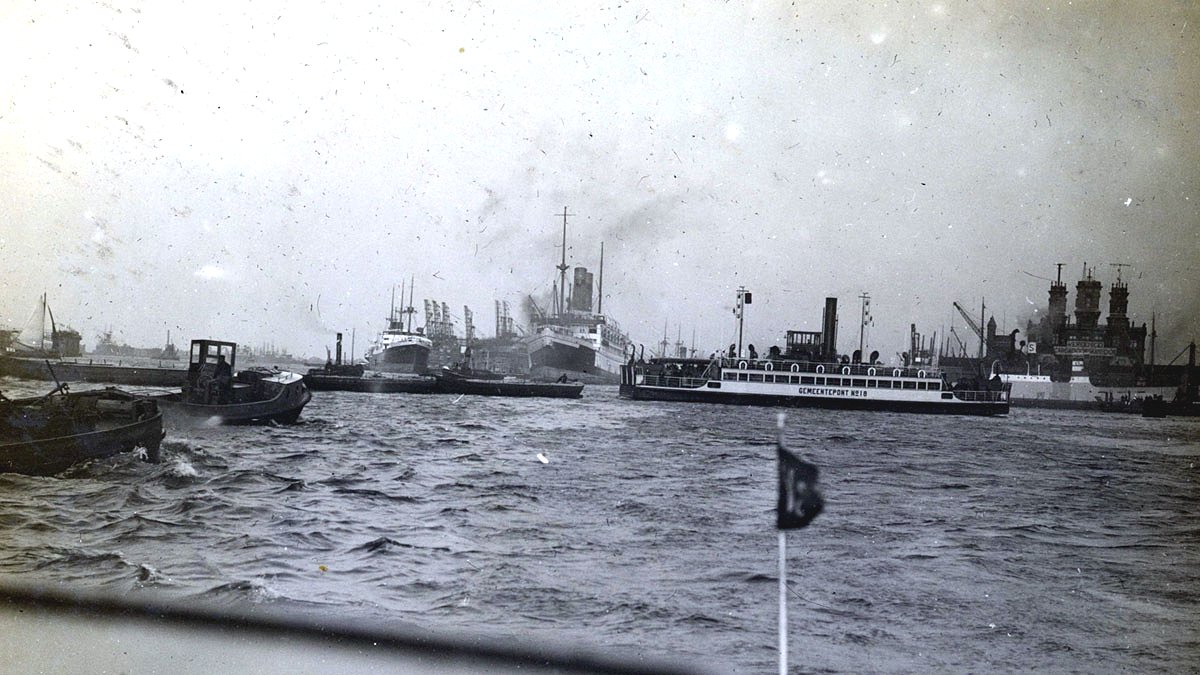 A Busy Amsterdam Harbor in 1930s
Amsterdam Harbor with vessels small and large.
The ferry has 'Gemeentepont No.18' written on its side.
Photo from 1930s contributed by Marcel Gommers
The Netherlands 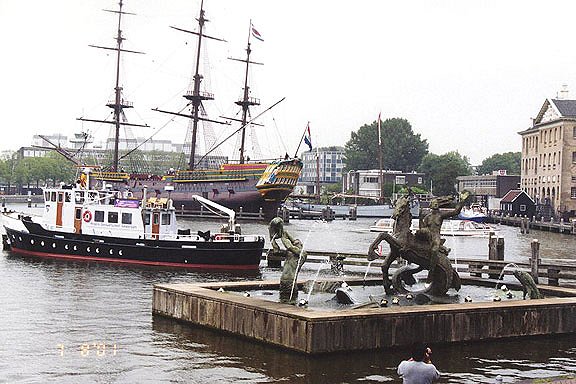 The Schreierstoren from Wikipedia. (English incorrectly translated as: Weeper's Tower), originally part of the medieval city wall of Amsterdam, the Netherlands, was built in the 15th century.