Every Friday is market day for farm and city folks in Amersfoort. For farmers, there were the cattle, hogs, chickens, goats, rabbits, etc. For civilians: cheese, fish, flowers, eggs and general merchandise, mostly dominated by the Jews. Here they sold everything from soup to nuts.

Thus each Friday, I was there when I went to trade school. One thing I learned: a business Jew is not a nice person. One of them who came every week with 1001 articles was a good yapper, his mouth never stopped. He had one item: explained how good it was and you needed it so bad, how could you live without it, yak, yak, yak.

Another fellow, non Jew, came with a suitcase full of pocket knives, the only thing he had, and set up shop near the "everything Jew". This boy sold his knives for 25 cents. The Jew had the identical make and had sold them too for 25 cents. But now when this one item fellow moved in, the Jew started to sell his for 15 cents. Shortly after that, the little fellow left with tears in his eyes.

Note from Volunteer Webmaster:
Please bear in mind that this autobiography was written in the 1930's.
Some statements may not seem to be politically correct today.

The cattle market was an interesting place to watch, especially when they were buying and selling. You could always distinguish the farmers from the dealers. The latter always had fancy yellow painted wooden shoes adorned with black, red, and different colors of paint. The farmers wore plain wooden shoes, sometimes white washed.

The big advantage, of course, if a cow stepped on your foot while you wore a leather shoe, maybe you didn't walk no more on that foot. If the cow stepped on a wooden one, she got off quick, it's too uncomfortable, and you walk away. Also, wooden shoes were warm in the winter, cool and dry and easy to remove when you enter a clean room.

An offer to purchase an animal is only recognized by a hand clap. This was really funny to watch. For instance, one fellow asked the other, "How much?" If he was serious, he held his hand open. The other man named a price and slapped his hand. This went on sometimes for a while, offer and counter offer but all the time accompanied with a hand slap. This kept on going until finally the deal was sealed or rejected.

At the fish market, it was a totally different scene. Here, the fish wives and men from Spakenburg lined up with their single or team powered dog carts. All were dressed in their native costume, including black or yellow painted wooden shoes. There were two reasons for wearing those clothes, I believe. First, it was their religion, which was Reformed and very strict - like not riding your bike on Sunday, no laboring, no drinking, no partying and spending most of the day in church. Second, kept the tradition going: "We are not going to change for anybody, we will modernize and take advantage of technology if it becomes available, but leave our way of life alone. We have been living like this for ages, it worked fine, why change?" Good point? No! Outsiders thought they were cute or something, but they themselves wanted to be left alone.

Hearing all those stories, we wanted to find out for ourselves. So, one nice Sunday afternoon, I biked with a friend to find out more.

First, we came to the farm community of Bunschoten. Beyond this on the only road was the attention getting fishing village of Spakenburg. It was no disappointment. It sure was strange not to see one bicycle on the road on a fine day.

The houses were very narrow and high, built very close together, with shutters, windows and doors painted in livid colors of green, red, white and black. The houses were all built out of red clay brick as were the streets.

From the Southern Sea ran a canal right through the middle of this village. The canal served as the harbor with fishing boats tied up on both walls. Those ships were a breed by themselves. They were short and stubby with tall masts pointing skyward with many ropes and riggings to hoist their sails. But the oddest feature was they had wings like a bird, folded beside their bodies.

Later on, I found out the wings were to steady the boat when they were out at sea: they let them down into the water. They were also aids in navigating. These were all sailing ships and without the wings, the wind would probably blow them all over. Oh, maybe I was all wet. No activity today on or off the boats.

The street was empty except for people who walked to or from the only church. No greetings today, save for some disapproving glances, but mostly we were ignored. We pedalled on the right side of the street. People who walked on the left met us but would not budge to let us pass. We felt uncomfortable but we were forewarned and took it seriously, so we moved over and let them pass us. No problem.

The History of Dutch Wooden Clogs from eHow. 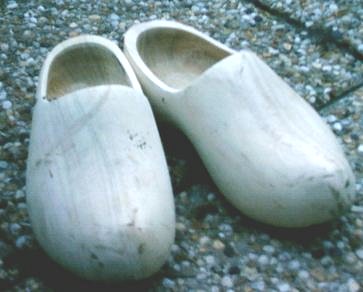 Willow-wood Dutch clogs / Holland füzfa klumpa
"A clog is a type of footwear traditionally worn by workers
as a protective clothing in factories, mines and farms.
Predominantly they are made of wood?
and as a traditional wear they are popular in Netherlands,
Belgium, Denmark, Galicia (in Spain), Lithuania and Sweden."
Info from Jadyn and Ben 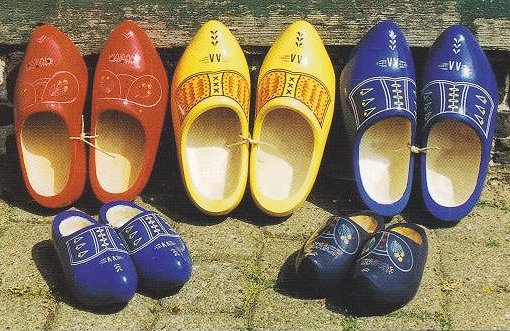 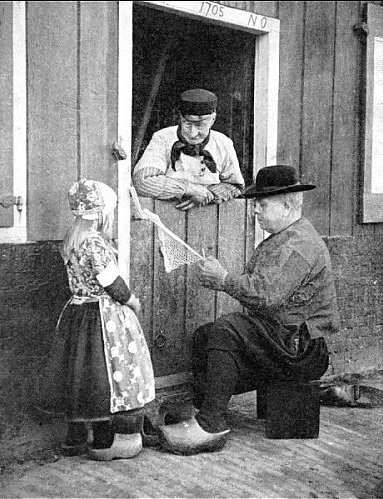 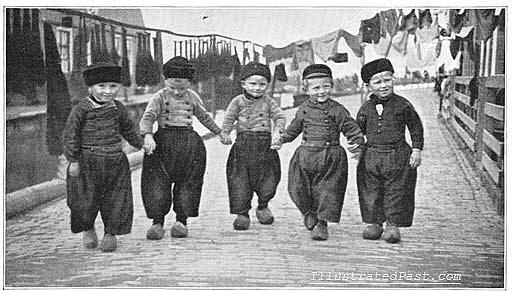 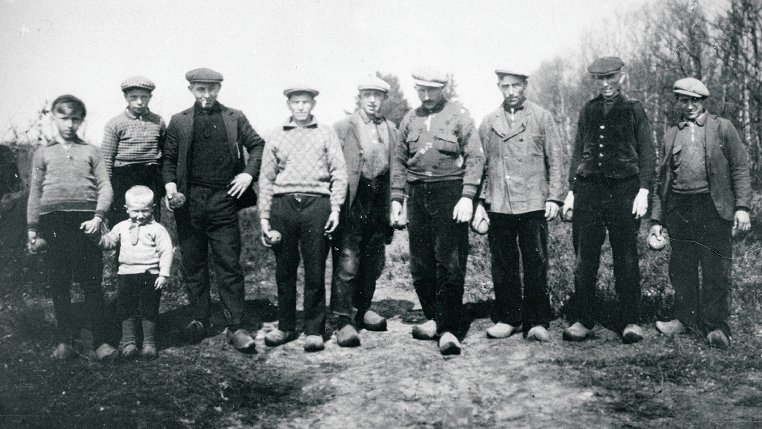 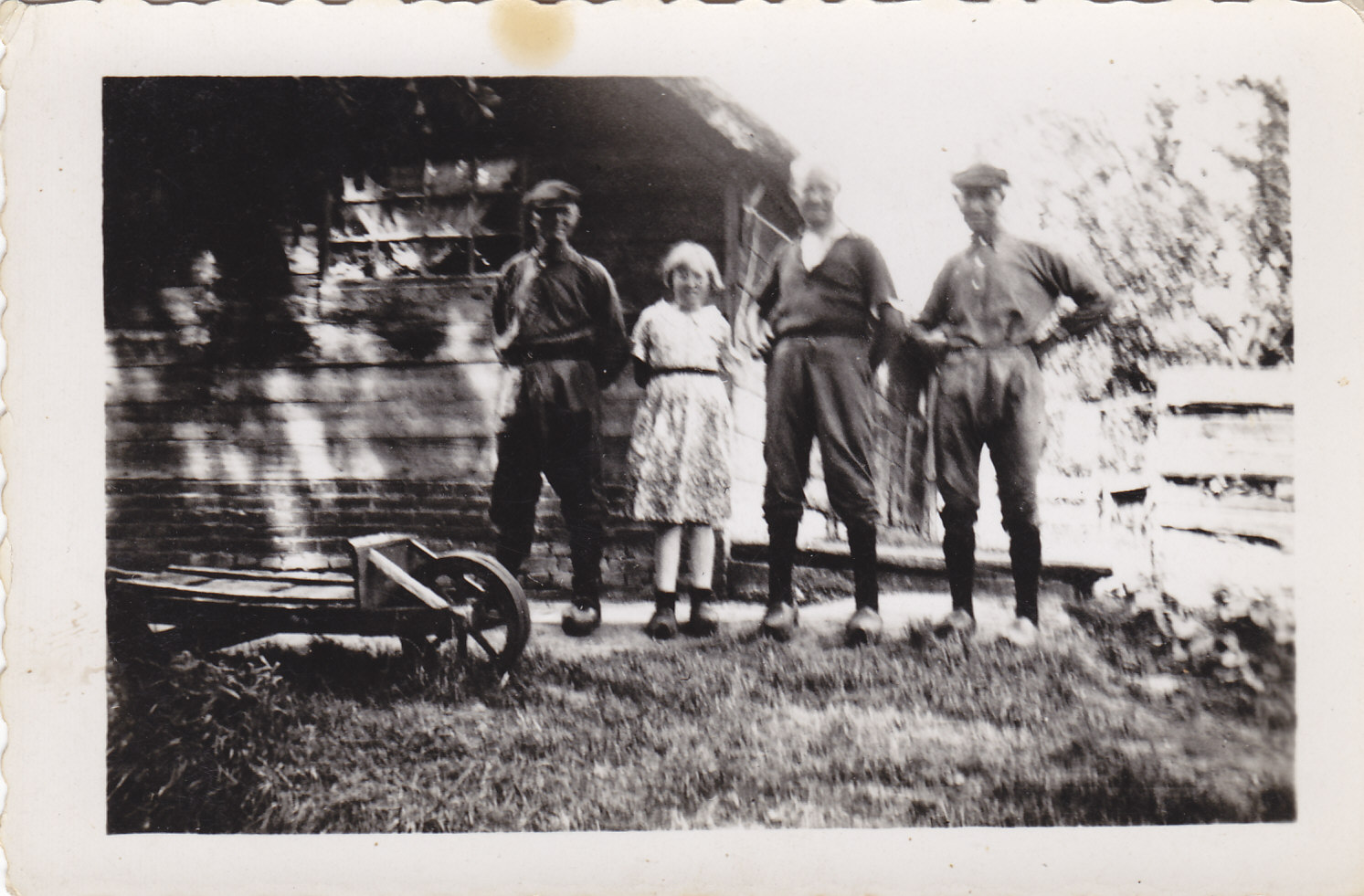 "Villagers wearing clogs in Giethoorn, Netherlands. 1930s.
Part of a set of photos taken by my grandfather
when he visited his pen friend in the Netherlands
in the early 1930s."
The above photo belongs to benicektoo's photostream. 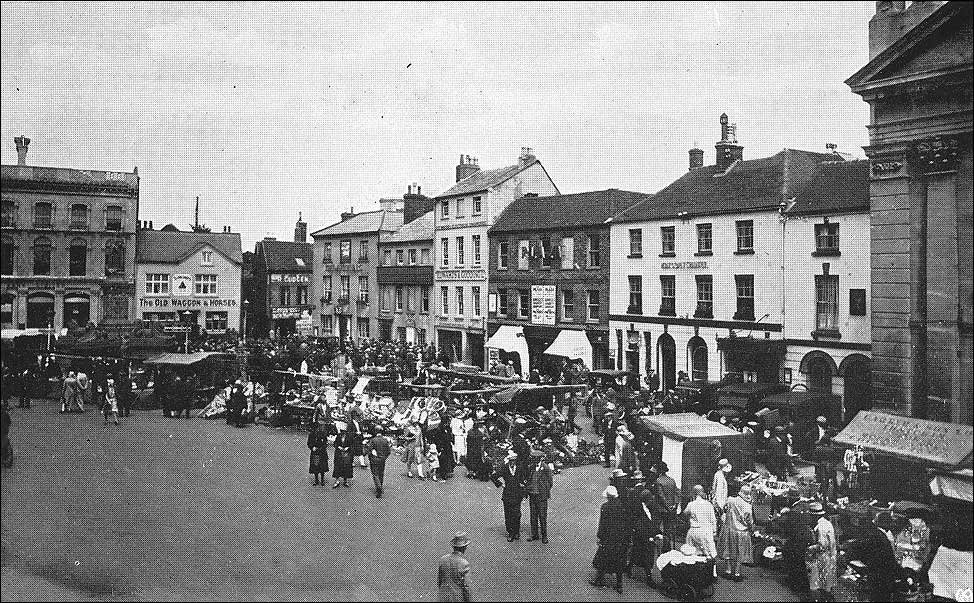