When I got back from the cattle drive, everyone was already back from their evacuation trip to North Holland. Now I had to find out for myself what had happened in those confusing days.

The truck I left in the garage was gone, the owner came and had taken it away. Out of a job, a lost war, part of the country destroyed, farms and houses all flattened in front of the defence line. Many families homeless, cattle lost and killed, what was in store for us? That was how it was around here, but how was it in the rest of the country? Only one way to find out for sure: go and see.

My buddy and I mounted our bikes and headed to where the biggest battle of the war had taken place: on the Grebbeberg in Rhenen. This was on the same defence line as ours, about 30 km west. We stopped at several different spots along the line which had been so busy for the last half year with soldiers preparing for battle. During that time, nobody could even get close, now it was all abandoned and an eerie stillness hung over those trenches. Where we played as children in those dykes had all been turned into fortifications, trenches zigzaging all over, interrupted with heavy steel and concrete bunkers all facing Germany.

For hundreds of meters in front of the bunkers, everything was flattened: houses, farms, woodpiles, barns, so they would have a good view of the oncoming enemy. The land had been inundated with water off and on for several months and was still soggy. When the water was 25 to 50 cm deep, no one could pass through this barrier. The Germans never even tried.

Everywhere there were signs of a hasty retreat. Once we found an army motorcycle leaning against a tree, seemingly in good shape. Why we never took it home I never understood. Maybe too innocent yet.

Hitler did not try to go through the soggy fields, so he tried to go around it on higher grounds: the Grebbe Mountain. But here, the Dutch were waiting behind the river in the bushes and bunkers. The biggest battle took place right here.

It was not possible for me, in my limited capacity of words, to describe the feeling that came over us. The trees were completely stripped of foliage. This was May when everything should be in bloom, but there was nothing but devastation and death here. The trees that were still standing looked like ghosts with stumps for arms and not one leaf left on them. One helmet on the ground with a bullet hole right through the front. Mass graves side by side. One new pit was still open with what looked like two or three men buried at one end. The same young men we laughed and joked with only a short while ago, their lives snuffed out before they even really started to live.

Thirty years later, I again visited this same battlefield. Trees with full foliage once again beautified the forest. Below was a simple impressive memorial to the boys who met their fate in defence of their country. In front were row upon row of white crosses, sometimes interrupted with a stone with the name, unit and rank of the fallen defenders of freedom.

Now we moved on to Rotterdam to see why the government capitulated. On the way, we saw several graves beside the roads, hastily dug and roughly covered. We presumed those were soldiers killed by airplanes.

In the big harbor port was a devastation never experienced before in the Netherlands. Whole city blocks in ruins, blown apart and what the bombs did not destroy was ravaged by fire. Some streets were totally blocked by collapsed buildings. The human suffering must have been terrible. Those people were innocent and totally unprepared. What were they guilty of to deserve a fate like this? And what kind of monster could order the destruction of all these families?

● Video about the invasion of Holland.YouTube video, 6:02 min. 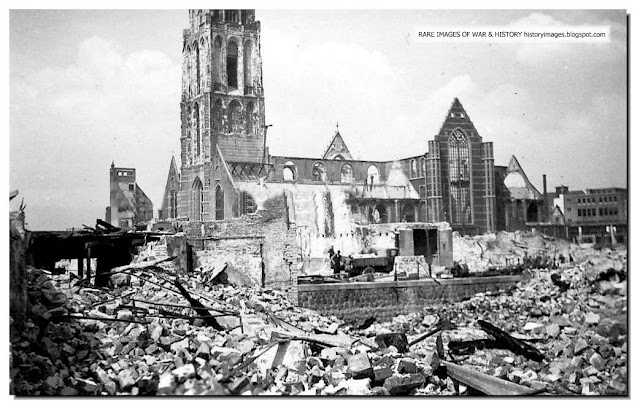 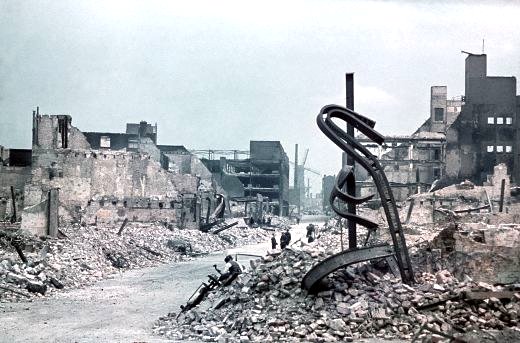 The devastated centre of Rotterdam,
23 May 1940