Soon we were on our way back home, wondering about all this destruction and misery. Why was this? History tells us there always have been wars. We read about it and say, "So what?" But seeing the results up close gave one a whole new insight. And for what? To satisfy one lunatic’s desire for power?

Going home, we met "Der deutschen Wehrmacht", Hitler's occupation forces. They came by the thousands: trucks with canons, half tracks, tanks on trailers, infantry loaded on and in any kind of transportation. They seemed to have everything, and to have brought it, including boats and bridges. Those were the first units.

Later on, we met the cavalry, hundreds of horses and equipment, more guns, more canons and everything you could imagine. We thought horses were a thing of the past. They must still be useful - seeing the numbers that came streaming in.

Everywhere you went you saw the sadness in the eyes of the people, as if to say, "Why do you do this to us? We were neutral, we did not take sides.” But now we would take sides. From now on, you were our enemy also. How we were gonna live with you, time would tell. We were a stubborn people and would never live in peace with you until you were gone. This was the mentality of the Dutch people after the 1940 war. To start with, we would just ignore the Germans occupying our land.

South of the border, in Belgium and France, the war raged on. In about 40 days, it was all over, even France was finished. We saw pictures in the papers of jubilant people welcoming the Germans, even photos of Hitler himself under the Arc de Triomphe in Paris waving to the enthusiastic crowds. Whoever believed a story like that must not only be blind, but also out of his mind. Of course the media was censored and fed propaganda from the Third Reich.

The first order that affected us all was the blackout. How strange it was to come to the city and all was dark, no street lights, houses were all darkened, automobile headlights all covered except for one small slit to let a bit of light through so you could see it coming - absolutely useless to the driver.

Bicycles had to be the same. The only permissible light outside had to be blue. Several times, the police came to our house because they could see a little bit of light coming around a window cover.

I am sure our hearing improved a lot during those times, you could no longer rely on your eyes, so you listen. Traffic in the cities decreased dramatically. Only buses and trucks supplying food product or farm supply were left.

The armies did not want old trucks. The stores and showrooms which used to give such a happy atmosphere to the shopping places were totally dark. Social life came pretty well to a standstill. A little theatre group which I belonged to and which gave performances twice a year came to a halt. Fairs, celebrations and parades we used to have in the summer time, and let us not forget motorcycle races, all came to an end.

● Dutch Resistance Museum - History. "Despite having declared neutrality, the Netherlands were invaded by the German Reich on May 10, 1940. Subsequently, the Queen and the government fled to London. On May 15, the Dutch army surrendered . . . the support for National Socialism remained slight. Many were appalled when the order police arrested over 400 Jews during raids in the Jewish quarter of Amsterdam in February 1941 . . . Mass deportations of the Dutch labour force to Germany additionally exacerbated the population. Although the discontent was widespread, only a small minority was active in the resistance. The resistance movement maintained an underground press, carried out strikes and acts of sabotage . . ." 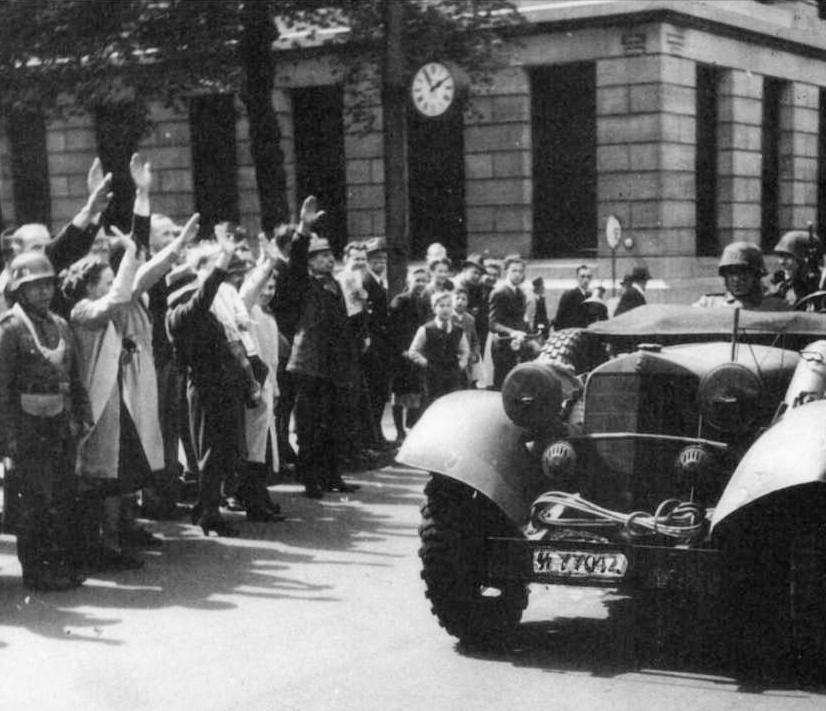 Waffen-SS troops parade through Amstersam
after the Dutch surrendered
(May 15, 1940)

German Western Offensive: The Netherland (May 10-16, 1940)."Here Waffen-SS troops parade through Amstersam after the Dutch surrendered (May 15, 1940). German motorized units moved throughout the country to cow the stunned Dutch people into submission. Note the NAZI sympathizers saluting. This of course did not reflect Dutch public opinion . . . A Dutch reader writes, 'Looking at the photograph I am sure that the people giving the Nazi-salute to the German soldiers were Dutch NSBers. The Nationaal Socialistische Beweging (NSB) were Dutch Fascists sympathetic to the NAZIs. They also could have been German citizens living in Amsterdam. No Dutchman would have welcomed the invading Germans. It is interesting to note that nobody was forced to give the Nazi-salute during the occupation. Of course nobody did, except the Dutch Nazis . . .' Photo Source: Süddeutscher VerlagBilderdienst, Munich." ~ Sources: Keegan, John. The Second World War (Penguin: New York, 1990), 607 p. ~ Stueck, Rudi. E-mail, June 22, 2010.