Everybody had to have an Identification Card with your picture and left ear showing (even girls with long hair), plus your fingerprint. On top of that, if you were a Jew, you wore a yellow Star of David, the size of a saucer. "Hitler will protect you," they told the Jews. "But if you don't wear a star, a death penalty awaits you."

For a while, the Jews held back, but when they saw nothing happened to the ones with a star, most others signed up too, for protection!

The smarter ones, who did not get fooled, disappeared and went into hiding with a good friend or someone who knew how barbaric the NAZIs could be.

When all were registered, the SS came at night during curfew when everybody had to be home. They grabbed the old, young, children, weak, crippled, the whole family.

I saw whole trains all consisting of cattle cars, the vents at the sides nailed shut with barb wire, packed-in like animals so tight they had standing room only.

Rumors said they went to work in lead mines, which were poisonous. To stay healthy, you had to drink lots of milk, but of course, no milk for those Jews. 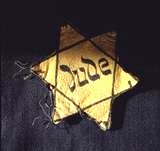 The Yellow Star by Jennifer Rosenberg, About.com Guide. "The yellow star, inscribed with the word 'Jude,' has become a symbol of Nazi persecution ... on November 16, 1939, the order for a Jewish badge was announced in Lodz (Poland).

'We are returning to the Middle Ages. The yellow patch once again becomes a part of Jewish dress. Today an order was announced that all Jews, no matter what age or sex, have to wear a band of 'Jewish-yellow,' 10 centimeters wide, on their right arm, just below the armpit.'

... a decree, issued on September 1, 1941, issued badges to Jews within Germany as well as occupied and incorporated Poland. This badge was the yellow Star of David with the word 'Jude' ('Jew') and worn on the left side of one's chest.

... If a Jew forgot to wear their badge they could be fined or imprisoned, but often, it meant beatings or death ... Wearing the badge meant that they were targets for attacks and that they could be grabbed for forced labor ... With the visual labeling of Jews, the years of haphazard persecution quickly changed to organized destruction."

"On July 26, 1941, the Judenrat (Jewish Community Council) of Bialystok announced that 'the authorities have warned that severe punishment - up to, and including death by shooting - is in store for Jews who do not wear the yellow badge on back and front.'

The German government's policy of forcing Jews to wear badges, and then confining all who wore them to ghettos, was a tactic aimed at isolating the Jews from the rest of the population. It enabled the German government to identify, concentrate, deprive, starve, and ultimately murder the Jews of Europe under its control."

Yellow badge from Wikipedia. "The yellow badge (or yellow patch), also referred to as a Jewish badge, was a cloth patch that Jews were ordered to sew on their outer garments to mark them as Jews in public. It is intended to be a badge of shame associated with antisemitism."

The Jewish Badge. "Werner Keller's Diaspora: The Post-Biblical History of the Jews describes the results of Pope Innocent II's Fourth Lateran Council of 1215. One of canons mandated that:

. . . Jews 'whether men or women, must in all Christian countries distinguish themselves from the rest of the population in public places by a special kind of clothing.' The reason given for this was to prevent 'criminal' sexual intercourse between Christians and Jews. 'So that,' the text declared, 'henceforth in case of such criminal intercourse no mistake can be alleged as an excuse.' In November, 1215, a papal bull gave these decisions of the Council the force of canon law.

The dreadful Jewish badge had been created -- that dishonoring sign which for centuries was to expose the Jews to public contempt everywhere they went in Europe."

Star of David: Why I Wear It by Hugh Fogelman.

"In 1215, the Pope decreed that hence-forth, all Jews were to display prominently on their breasts the Yellow Badge of Shame.

. . . in addition to the 'Yellow Badge,' the Diocesan Council in 1229 ordered Jews to wear the 'Jedenhut' hat, shaped like a cone dunce cap (later to be known as the 'Jew Hat').

. . . For over 700 years, Christians made Jews to appear as a ridiculous group of people, less human than they and an object to be laughed at, ridiculed and scorned. No human being should ever be forced to endure such punishment, scorn and ridicule.

Over 2,000 years of misery were brought upon the Jews primarily because of one unknown Christian author, whose work is known as the Book of Matthew. This writer, incorrectly, told the world in his biased New Testament book, that the Jews were solely responsible for the death of Jesus. And the Christian world believed it." 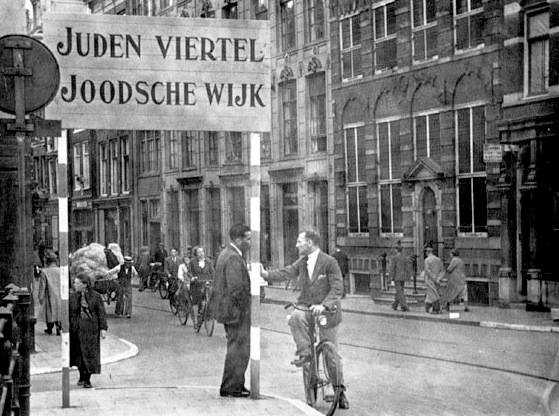 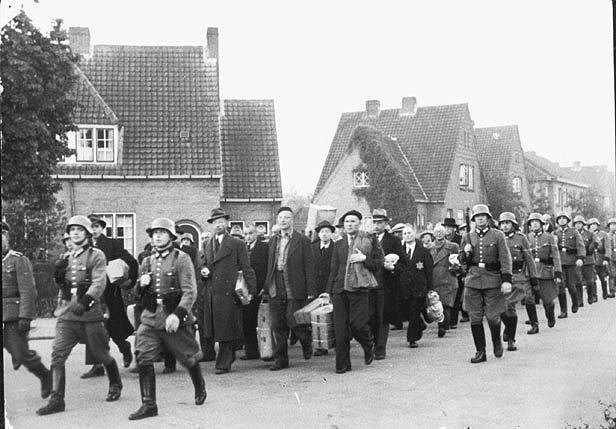 The Netherlands - Holocaust Encyclopedia. "As of April 29, 1942, Jews were required to wear a yellow Star of David on their clothing.

Deportations of Jews from the Netherlands began in the summer of 1942. The last train left Westerbork for Auschwitz on September 3, 1944. During these two years, the Germans and their Dutch collaborators deported 107,000 Jews, mostly to Auschwitz and Sobibor, where they were murdered. Only 5,200 survived. In addition, 25,000-30,000 Jews went into hiding, assisted by the Dutch underground. Two-thirds of Dutch Jews in hiding managed to survive."

The Jews' Star from WWII in the Netherlands, Blog by Ed van Rijswijk. 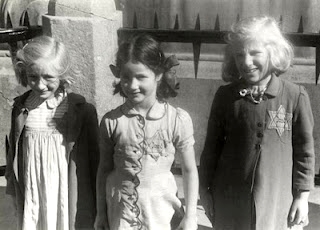 Survival and Resistance: The Netherlands Under Nazi Occupation by Linda M. Woolf, Ph.D. "At the time of Holland's capitulation, approximately 140,000 Jews resided in the Netherlands. By the time of the war's end, the Nazis had deported 107,000 Jews out of Holland. Of these, only 5,000 survived to return home following the war and 30,000 managed to survive in hiding or by other means. Thus, over 75% of Holland's Jews perished at the hands of the Nazis. This represents the largest percentage of Jews to die from a particular country with the exception of Poland." 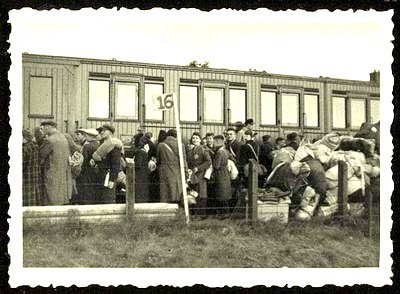 Westerbork, The Netherlands,
Jews Boarding a Deportation Train to Auschwitz 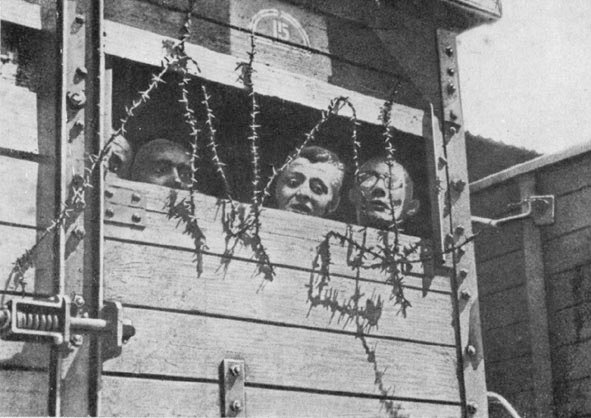 Dutch Jews put on trains with barbed wires
head for concentration camp, circa 1942

Virtual Jewish Library Tour - Netherlands: The Holocaust Era. "... Soon after the Nazi occupation, the first anti-Jewish laws removed Jews from their professions, their schools, and their homes. In late 1941, a deportation plan was intacted providing for the removal of the Jews from all the provinces and their concentration in Amsterdam. This phase was launched on January 14, 1942, beginning with the town of Zaandam. The Dutch nationals among the Jews were ordered to move to Amsterdam, while those who were stateless were sent to the Westerbork camp.

The attempt to make Holland Judenrein (clean of Jews) was completed when the Nazis began to deport Jews countrywide on October 2, 1942. 12,296 were deported. In May 1943, the rate of deportations was accelerated. Most were sent to Auschwitz and Sobibor ..."

Valkenburg resistance from Wikipedia. "Hiding Jews was even punishable by death and one third of the people who hid Jews did not survive the war."

"Small groups united into the LO (Landelijke Organisatie voor hulp aan onderduikers - National Organisation for help to people in hiding) . . . Another organisation was the Knokploeg (assaultgroup) or KP. The KP would obtain goods needed for the people in hiding and the LO would then distribute them."

"The ration cards were a means for the Germans to make it difficult for people to go into hiding, because they couldn't get any food."

Drenthe village awarded medal for large-scale WWII aid to hunted Jews. "The population of the isolated village of Nieuwlande increased drastically during the dark days of World War II but the new arrivals rarely were seen in public."

"The majority of Nieuwlande's unregistered people were Jews in hiding who had refused to report to the Nazi's for deportation to concentration camp ... Almost every family in the area around the village had taken in people, some as many as ten."

"Not many people in the Netherlands today know about Drents Jerusalem, Nieuwlande's nickname. In ancient Jerusalem, a continent away, the village received special acknowledgement in April 1985 as the only community which in its entirety was awarded a honourary Yad Vashem medal for harbouring strangers in its homes. A month earlier, a large majority of the villagers had received the Yad Vashem Award individually."

Amsterdam "The City That Remembers" part 2. "Jaap vanVelzen, who was just 12 years old when he escaped from his Nazi captors by brazenly slipping away from a kindergarten where he and other children were being held awaiting shipment to the death camps . . . His childhood recollections are woven into this portrait of the systematic roundup of Jews, gypsies, homosexuals and t./he mentally impaired and their shipment out of Amsterdam using the city's own streetcars to deliver them at night to waiting Nazi freight cars at Amsterdam's central train station. From there they were shipped to Westerbork concentration camp before being sent on to their deaths at Auschwitz and other German death camps."

History of the Jews in Amsterdam - The Holocaust from Wikipedia. "In January 1942, the Germans began the relocation of provincial Jews to Amsterdam. Within Amsterdam, Jews were restricted to certain sections of the city. Foreign and stateless Jews were sent directly to the Westerbork transit camp.

In July 1942, the Germans began mass deportations of Jews to extermination camps in occupied Poland, primarily to Auschwitz but also to Sobibor. The city administration, the Dutch municipal police, and Dutch railway workers all cooperated in the deportations, as did the Dutch Nazi party (NSB).

German and Dutch Nazi authorities arrested Jews in the streets of Amsterdam and took them to the assembly point for deportations - the municipal theater building, the Hollandsche Schouwburg. When several hundred people were assembled in the building and in the back courtyard, they were transferred to Westerbork.

In October 1942, the Germans sent all Jews in forced-labor camps and their families to Westerbork. All were deported to Auschwitz-Birkenau within a few weeks.

In May 1943, German authorities ordered 7,000 Jews, including employees of the Judenrat in Amsterdam, to assemble in an Amsterdam city square for deportation. Only 500 people complied. The Germans responded by sealing the Jewish quarter and rounding up Jews. From May through September 1943, the Germans launched raids to seize Jews in the city.

The Germans confiscated the property left behind by deported Jews. In 1942 alone the contents of nearly 10,000 apartments in Amsterdam were expropriated by the Germans and shipped to Germany. Some 25,000 Jews, including at least 4,500 children, went into hiding to evade deportation. About one-third of those in hiding were discovered, arrested, and deported. In all, at least 80 percent of the prewar Dutch Jewish community perished."