We were hoping and praying this would be the end of the war for us. However, it was not to be.

The Allies had advanced up to Arnhem. This was where the last of the big river bridges, the RHINE, which bridge had been captured by the airborne troops, but had been lost again to the Germans. For the full story, read the book: "A BRIDGE TOO FAR." I think it was written by Cornelius Ryan, who got all the details of the terrible fight that took place at and around the bridge.

That stopped the advance of the allied armies, it also stopped the exodus of the German armies out of Holland. The German soldiers turned around and came back. From then until the end in May 1945, it was the worst period for the civilian population in the northern part of the occupied portion of the country.

To top it off, it was also the coldest, most severe winter in a decade.

This last winter, we practically lived in the battle zone: no evacuation of civilians, soldiers coming and going, no food or fuel.

It was amazing what people could stand, and what they would do when they came this close to dying of starvation. They survived with a hungry, decaying army on their doorsteps, and how.

This was also a time when many went back to religion, and prayed, "Please Lord, let it end." 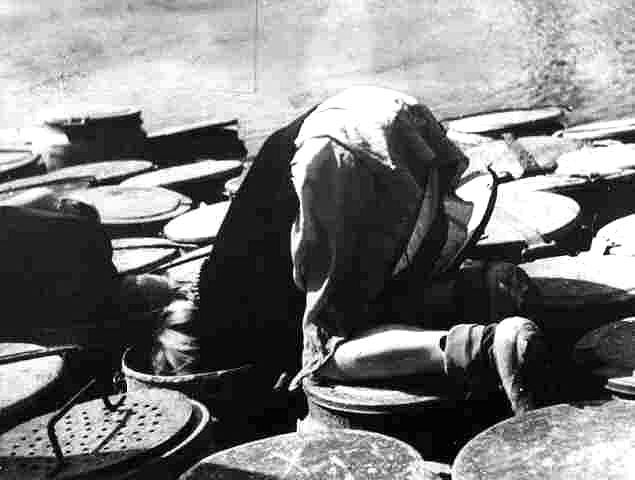 A child is looking for food remnants
in a garbage can during the hunger winter.
Photo by J. van Rhijn, period 1944/1945
(Image from Rotterdam 40-45)


Dutch famine of 1944 from Wikipedia.

Pieter van Marken Memoir: The Hungerwinter. "... there was a 'sperr' time, a curfew after dark. You could not go out into the street and you had to stay indoors until the next morning."

"I went on long bicycle rides, on food raids. 'Hongertochten' or literally, hunger trips, they were called, to get food. You went to so called 'friendly' or 'good' farmers to collect wheat. Other 'bad' and greedy farmers collected a fortune for their food ... my parents for example, had exchanged the grand piano and gold wedding rings for food. You would cycle for hours in the biting cold and then you stood in long queues for hours in the snow and the cold, to end up collecting perhaps only a pound of wheat."

Dutch Famine of 1944 / Hunger Winter. "...people started burning their own furniture and books to keep warm."

The Hunger Winter of 1944-45 from Amsterdam Tourism. "The Nazis in retaliation for the [railway] strike closed down all roads. Nothing moved anymore, no food, no fuel, no coal which most people still used for heating."

The West of the country with its large cities soon faced shortages of all commodities. The people grew hungry, but that's not all, it was also turning out to be one of the worst winter ever. People started to burn wood instead of coal, the houses of Jews who had been deported to Germany and Poland stood empty, soon everybody was stripping them down looking for anything to burn."

"The allied air force started dropping food over The West several days before the end of the war. This was called operation Manna, executed by the RAF."

"The Americans took care of Amsterdam in operation Chowhound, they used Schiphol airport as a dropping zone. The food was collected and passed out to the population. The rest of the Netherlands did not become free of Nazi occupation until their final surrender on May 4th and May 5th, 1945. It was left to the Canadians to liberate us."

"The toll: Over 20.000 people died of starvation during the hunger winter."

Rotterdam 1940-1945. YouTube video, 5:38 min. Een film over Rotterdam in WO II. Te zien foto's van het bombardement, de Jodenvervolging en het herdenken. (A film about Rotterdam in WWII. To see pictures of the bombing, the Holocaust and to commemorate it). Uploaded 18 Jan. 2010.

Winter in Wartime (film) from Wikipedia. "Winter in Wartime (Dutch: Oorlogswinter) is a 2008 Dutch war film directed by Martin Koolhoven . . . The film is about a young Dutch boy named Michiel van Beusekom who tries to help the Dutch resistance during World War II by helping a British pilot stay out of German hands during the occupation of the Netherlands."

VE-Day countdown: Food prices soar in Dutch famine zone. Audio from CBC.ca. "April 21, 1945: APELDOORN, Holland -- Even as liberation looms, Holland is teetering on the edge of famine. After five months of utter deprivation -- a period of no food and no fuel dubbed the "Hunger Winter" -- food is scarce. CBC reporter Peter Stursberg is astonished when he gets a glimpse of a Dutch housewife's shopping list. A loaf of bread goes for the equivalent of $4 and sugar is $15 a pound. Coffee, if you can get it, costs $85 a pound.