Early in the war, Hitler tried to bomb England into submission. When that did not work, he turned east and tried to do away with the Russians. That did not work either. In the meantime he had his engineers working on a flying bomb, which he called V1. I believe it stood for Vengeance 1, certainly not for Victory 1. I will never forget my first view of the cursed thing.

Only occasionally were German airplanes to be seen. We saw plenty of allied planes but they were high in the sky. However, one beautiful Friday afternoon around 2 p.m., a loud noise, that of a low flying airplane came straight toward us. It was unusual. It sounded like a rolling thunder coming closer and closer. Then we saw it, only about a hundred meters above us, and not going any faster than an airplane.

What was it? It was shaped like a cigar with a short stubby wing, no pilot, with another cigar shaped thing a little smaller on top, or rather a pipe open in the front and a roaring fire coming out of the tail, like a giant blow torch. It also had a tail like an airplane with rudders. The blow pipe was past the tail fins so as not to burn the steering mechanism, I suppose.

The thing kept on going north and disappeared over the horizon. But that was not where England was, clearly another misfit. This was the only one I ever saw so close and clear. Many more came over, but they were always higher and further away.

One dark night, we heard one coming. We went to look and there it went. Its fiery tail visible and disaster brewing because it was going in a wide circle. We watched it until the fuel ran out, then some seconds later, we heard a blast when it hit the ground and exploded.

Later on they came out with the V2, an improvement, I believe, over #1 as this one was visible only at launching. It was a fire ball, or a red star, going straight up so high until it became invisible. The V2's were a lot better because they did not fall out of the sky and scattered all over the country.

There was not a moment after D Day that we were not reminded that a war was going on. Every day, two fighters were patrolling the sky and every day and every night, fleets of bombers came over on their way to Germany.

Many times we heard over radio Holland that a thousand bombers dropped their deadly loads over enemy territory. I took the time once to see them pass. For two hours, the sky was filled with two-engine bombers, but most often they were four-engine flying fortresses or whatever they were. Darting among them, you could see much smaller and faster planes. We presumed they were fighters to protect the big bomb carriers.

On their way back, it seemed that they lost formation because they were never together any more. When the dog fight started, especially at night, you could not see anything. You could only hear the sound of machine gun fire and the roaring of engines, like they shut them off, then again had them on wide open and so on. It never lasted more than a few minutes at a time.

When one airplane got shot down, we raced to where we thought it had come down the next morning, but the Germans had removed most of it. All we could find was an airplane engine partly buried in the side of a railway dyke.

One Sunday morning in beautiful sunshine, when the planes returned from their raid, we saw one got hit. It was quite far away so we didn't know if it was ground fire that hit it, but it came apart in the sky. The engine came straight down, the wing or part of it spiralled in a circle. Then we saw parachutes unfolding, the end of one of our liberators, it made us feel so sad and helpless.

V1 and V2 Rockets from Wikipedia.

V1 flying bomb from Wikipedia. "The V-1 flying bomb (German: Vergeltungswaffe 1, Fieseler Fi 103) - also known as the Buzz Bomb or Doodlebug - was an early pulse-jet-powered predecessor of the cruise missile.

The V-1 was developed at Peenemünde Airfield by the German Luftwaffe during the Second World War. During initial development it was known by the codename 'Cherry Stone'. The first of the so-called Vergeltungswaffen series designed for terror bombing of London, the V-1 was fired from 'ski' launch sites along the French (Pas-de-Calais) and Dutch coasts." 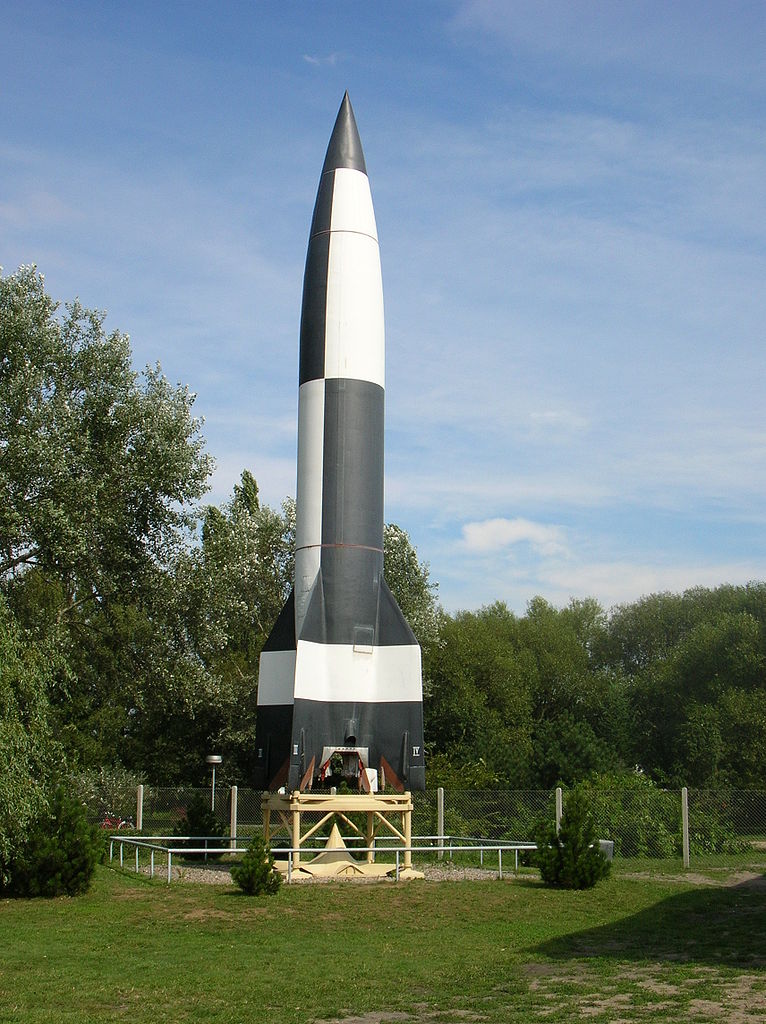 V2 from Wikipedia. "The V-2 rocket (German: Vergeltungswaffe 2, i.e. retaliation weapon 2), technical name Aggregat-4 (A4), was a ballistic missile that was developed at the beginning of the Second World War in Germany, specifically targeted at London and later Antwerp. The liquid-propellant rocket was the world's first long-range combat-ballistic missile and first known human artifact to enter outer space. It was the progenitor of all modern rockets ...

The weapon was presented by Nazi propaganda as a retaliation for the bombers that attacked ever more German cities from 1942 until Germany surrendered.

Beginning in September 1944, over 3,000 V-2s were launched as military rockets by the German Wehrmacht against Allied targets during the war, mostly London and later Antwerp. The attacks resulted in the death of an estimated 7,250 military personnel and civilians, while 12,000 forced labourers were killed producing the weapons."