Many strange things happened during those miserable years.

One morning when we came from church, planes were returning from bombing runs over Germany. Flak was everywhere. FLAKs are air defence cannons that shot grenades at airplanes where they would explode at a certain height. When they did, it left a little black cloud.

This morning, those little black clouds were hanging all around the air planes, or so it seemed, but they kept on flying, like they were unaware somebody wanted to interfere with their peaceful flight home. This was not unusual although I wondered many times, why did they not get hit? With their white vapor trails I thought they were easy targets. Maybe they were too high?

Anyhow, what was so different this morning? There were colored patches in the sky, like a rainbow was cut to pieces and those patches glued against the azure sky. Everybody saw the same thing so it was not a hallucination. We climbed up into the hay loft to have an unobstructed observation. It stayed for maybe a half hour then it slowly faded away. I guess nobody knew what it was or where it came from.

At night, many times one could see lights hanging in the sky, specially when there was no moon. When you watched closely, you could see them slowly drifting down to earth. With not an airplane in the sky, where did they come from and why?

Was it dropped a while ago at great height, hanging on a parachute and just now ignited? Was it dropped by the allies to stake out a route for bombers to orientate themselves because they flew with radio silence?

We also found strange strips of aluminium foil floating in the air and coming down to the ground. What in the world were they? One side was silver, the other side black? Could one pick them up? Could one win a war with seeding the sky with them?

Another strange thing came from the heavens, which was called magnesium (I never saw any). The Germans did warn and explain, "If you find them, take a pail of water and douse them, because they burn through everything and cause fires ..." etc.

But what I did find and saw were many leaflets and small books dropped with all the true news of what was happening on the different fronts of the world complete with pictures and maps. Those were real morale builders for the people. They gave us hope to go on and hang in there. Strictly prohibited by the Germans as lies, but gobbled up by the citizenry to keep the spirit of resistance going, and having proof the outside was working hard to free us from the tyrant.

Toward the end of the war other things also came falling from the sky.

It must have gotten known to the outside world that the Dutchmen in the occupied zone were starving. This put the Red Cross to work and with the generosity of Sweden, it was promised to send relief planes with food. We were very skeptical because the German army was hungry too. Would they let the people get hold of that food? Who knew? But it did create a glimmer of hope, and hope was what many people stayed alive with.

In time, the relief planes came. We saw them drop packages and the Germans did not shoot at them. But did we get any? The soldiers still had guns. Well, nobody knew how much they kept for themselves, but the people did get some white bread which we had not seen for four years. Again, nobody knew how many lives were saved, but they did absolutely an enormous amount of good, not only for the Dutch but also for the Germans. It was drummed in their heads that the Germans were the master race, "Deutschland über alles!" Germany over everything. But now they had to take charity, a very demoralizing situation for the occupation forces.

8.8 cm Flak 18/36/37/41 from Wikipedia. "The 88 mm gun (eighty-eight) was a German anti-aircraft and anti-tank artillery gun from World War II. Flak is a contraction of German Flugzeugabwehrkanone meaning 'aircraft-defensive cannon', the original purpose of the eighty-eight. In informal German use, the guns were universally known as the Acht-acht ("eight-eight"), a contraction of Acht-komma-acht Zentimeter ("8.8 cm"). In English, 'flak' became a generic term for ground anti-aircraft fire." 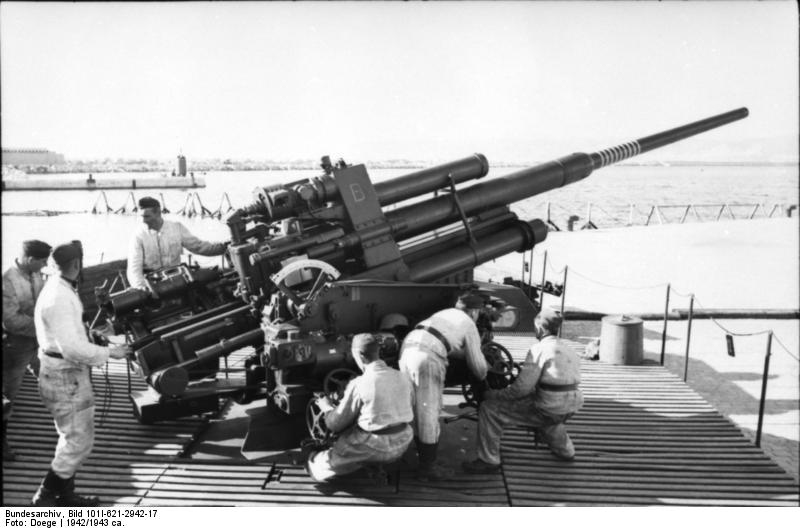 Falling from the Sky: The ultimate method: Monroe's bomb. Propaganda Leaflets of the Second World War.

Falling from the Sky: The shelling method. For short range combat propaganda, another technique was used. The shooting of leaflets with artillery grenades.

English Translation: "From 29 April to 8 May 1945 was 'Operation Manna' place, carried out by the Allied Forces. The occasion was the threat of mass starvation deaths among the population. In Rotterdam alone, more than 400 people died in a week, in early April 1945." 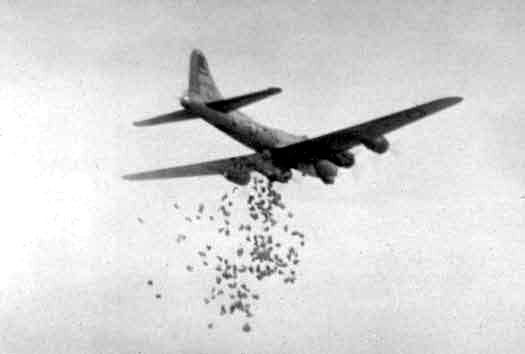 Operations Manna and Chowhound from Wikipedia.

World War II: Operations Manna & Chowhound by Kennedy Hickman, About.com Guide. "Dubbed Operation Manna, Royal Air Force began relief flights early on April 29 [1945]. Flying Lancaster bombers at low altitude, the test flight was a success and was not fired on by the Germans despite the lack of an official truce. Learning this, Geddes began the full-scale operation later that day with aircraft from Groups 1, 3, and 8. Drop zones at Leiden, The Hague, Rotterdam, and Gouda were marked by Mosquitoes from 105 and 109 Squadrons."

The Aid from Sweden.

May First: Chowhound Begins the first Day for the Americans. "Ground fog had forced the Americans to wait until the first of May, before they could join the RAF's efforts to help the Dutch civilians. The Americans started operation Chowhound with almost four hundred B-17's, which doubled the amount of food dropped on one day."

The number of mercy missions keeps growing. "On the second day of May the Allied and the Germans ratified the truce . . . Friesch Dagblad Wednesday 2 May 1945. The food delivery to occupied Holland . . . Also delivery by sea and land . . . 3650 ton has already been dropped since Sunday. Yesterday, 400 American airplanes dropped 800 ton food in the vincity of the Hague and Rotterdam. On the last missions the aircraft that went airborne had to struggle through heavy rain and snow in order to reach their target. One of the pilots told that people had been waving table cloths and sheets. Thousands of people had rushed into the streets."