Like I mentioned, toward the end we spent a lot of time at the post. We got word the Germans had moved four gondola cars (flat cars with 1.5 meter sides) into the railway yard, with Flak, anti aircraft weapons and manned with soldiers.

Our orders came to get ready to take them out when the command came to go. Wow, some order: direct confrontation with the oppressor - everyone volunteered. It was decided if we had to go, we would take a bunch of hand grenades, in the dark of the night sneak beneath the cars, then at a given sign, everybody would heave their grenades over the sides into the cars, success not guaranteed. There was no way to train ourselves. All we could do was to become familiar with our hand grenades. Maybe it would become a suicide mission.

The war was so close now we could hear the shells of the Canadian guns coming over. You could hear the vibrating whistles of the grenades going through the air. They seem to go so low and slow, we strained to see them but no way. Most of the time we could not hear when they reached their target and exploded. What their target was, we did not know.

Sunday morning, we were gathered again at our post in the house of the baker. It being Sunday, he kept the store closed.

Our commander had brought with him a whole handful of armbands, colored red, white and blue, with the outstanding color orange, and with black letters printed ORANGE. We paid way too much attention to his explanation that we should wear them as soon as the war was over, etc. Nobody had paid any attention to what was going on outside. All of a sudden, the doors flew open and before we realized anything we were surrounded by German soldiers rifles ready to shoot.

Funny thing, they acted as if we weren't there at all, nobody ran of course, we just milled around, walked here and there. They looked everywhere through the house and bakery, outside one fellow started to pull on the wood stack, but that is pretty well impossible to take apart, unless you start from the top. So he gave up on that deal.

One contact man was with us too, he had a little girl with him when the Germans barged in. It scared her so much she started to cry with a loud voice. The man immediately took her by the hand and walked her through the soldiers across the road and disappeared. He went and sounded the alarm to another post. They too were waiting for action. They decided that the Germans, who came on foot were not gonna march us out of there and got shot somewhere else.

Before the Germans were through, several underground fighters were stationed in and around us and ordered to fire at the Germans if they try to take us away.

Again, luck was with us. It seemed as if we were under the protection of the Almighty. The officer in charge called his men together. They lined up and marched away.

But now the big mystery, our commander with the armbands which should have been our death sentence, where were they? He had them in his hand when the soldiers busted in, when he saw his chance he put them under the table cloth on the kitchen table and put a flower pot on top of it. As soon as the coast was clear, he went for the table, and what ???? the bands were gone. What must have happened was the officer in charge must have found them himself, and realizing what it was, took no chances and put them quietly in his own pocket and got out of there. That was the only explanation we could come up with.

And why did they come a second time? It was not a Razia. This was again a raid, they only could have come to this place if someone had told them. Thank goodness the traitor was none of us because they did not find our weapons cache.

Amersfoort had a statue of the Holy Mary, with baby Jesus, 98 meters high, probably 600 years old, and in good shape. The Germans would like to use that for an observation tower. Canadians who were south and east of the city, didn't want them to. You could see every hit, not big enough to topple the tower I guess but mean enough to discourage the Germans from climbing up there. 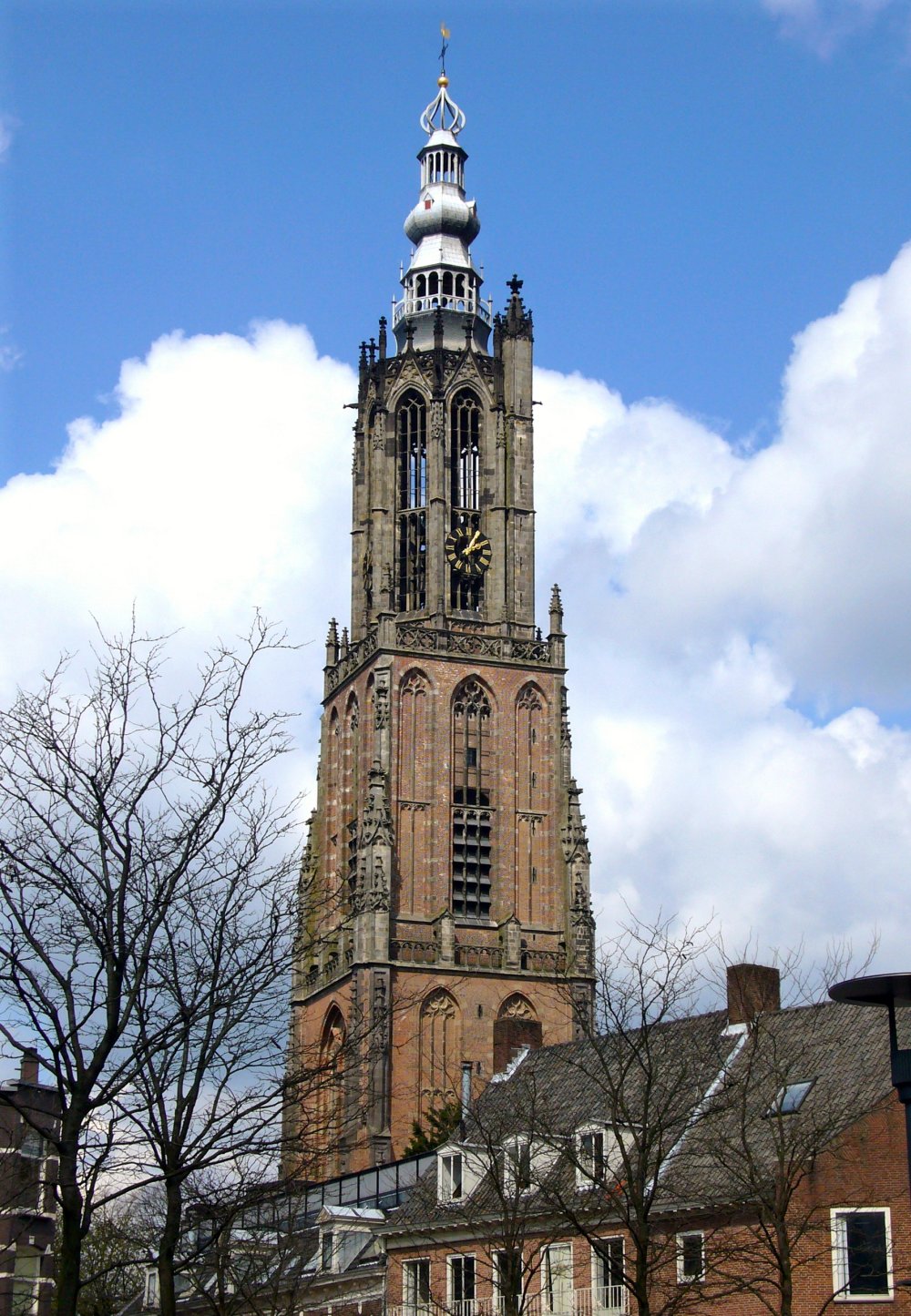 Amersfoort History from Wikipedia. "The Onze-Lieve-Vrouwentoren tower (The Tower of Our Lady) is one of the tallest medieval church towers in the Netherlands at 98 metres (322 ft). The construction of the tower and the church was started in 1444. The church was destroyed by an explosion in 1787, but the tower survived, and the layout of the church still can be discerned today through the use of different types of stone in the pavement of the open space that was created."

St. Mary's Tower. Southwest of St George's Church in Amersfoort rises St Mary's Tower (Onze Lieve Vrouwentoren), almost 100m/330ft high. This imposing Late Gothic tower, with a carillon of 47 bells by the famous Francois Hemony, is one of the finest of its kind in the Netherlands. It originally belonged to St Mary's Church, which was destroyed by a gunpowder explosion in 1787.