With them German soldiers so far away from home, and having a fairly good time in the Netherlands, even for them, their natural instinct came knocking on their heart. So when they got time off, their attention shifted to girls. Mostly they were met with a cold heart and shoulder. However some who did not understand the gravity of the crime that was committed by Germany, or did not have any loyalty for the country of their birth, or were attracted by the uniforms, did associate with the German soldiers. Those girls of course were more despised than the soldiers whom they went out with. In time, a song came out with a promise for them. It went something like this:

By the grand theatre
On the snouckert lane
Huddled in the shadows
Without a bit of shame
In the arms of a kraut
Without a care to worry about
When I pass by, I won't forget
That they will get, a shaven head
With a swastika instead.

During the last week or so of the siege on Amersfoort, when the bombardment was going on, there was always a little airplane overhead. It circled and circled. It reminded one of a buzzard, never flapping its wings, just floating around. We called it the "Flying Bed Board". Why the enemy did not shoot it down, or even fire upon it, we will never know. They said that the little plane was directing canon fire. We had to believe this, because you can be assured that nobody would be flying around just for the fun of it.

What was really astonishing during this time was that not one grenade fell on the city that we were aware of, save for the little ones that hit the tower to keep the Germans off. Day after day, we heard them whistling, but what did they hit? We knew it was not us. Thank you, Canada! 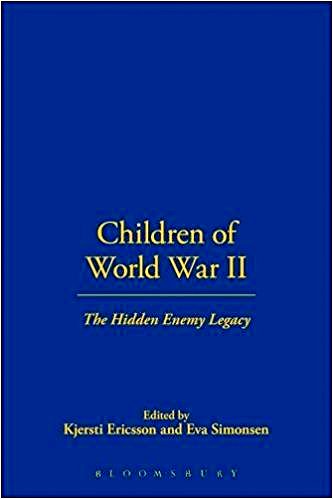 It looks at liaisons between German soldiers and civilian women in the occupied territories, and the Nazi Lebensborn program of racial hygiene ...

The authors examine what happened when the foreign solders went home and discuss the policies adopted towards these children by the Nazi authorities as well as postwar national governments. Personal testimonies from the children themselves reveal the continued pain and shame of being children of the enemy. Case studies are taken from France, Germany, the Netherlands, Czechoslovakia, Norway, Denmark and Spain ...

Fratenization - A Dutch reader writes, "I have never seen a photograph like this one. But of course a Dutch girl or woman going with a German soldier was an every-day occurence in occupied Holland."

German Fraternization Policies - "Here I am unsure just what the German policies about franternization were. Nor are we sure how strictly they were enforced. There were liasons between the occupation soldiers and Dutch women. The extent of the liasons I am unsure about. Nor am I sure about the number of children fathered by German soldiers. And after the War, many of these children were ostracized in the Netherlands."

Retribution - A Dutch reader writes, "Women who fraternized with the Germans were despised. After the liberation in 1945, they were rounded up, shaven bald and put on display on a truck or platform to be insulted by the liberated population. I have seen it with my own eyes. After the War, collaborators were arrested and put in camps until they were sentenced to prison or sent home. That all depended on the seriousness of the collaboration." [Stueck, Rudi. E-mail message, November 2, 2006.]

Female Collaborators Punished. YouTube video, 1:31 min. Published on Sep 18, 2013 by War Archives. "When France was liberated in 1944, women accused of collaborating with Germans were rounded up and had their heads forcibly shaved. The humiliating scenes often took place in front of jeering crowds. Members of the resistance were suppose to be doing the shaving but in fact many of them weren't from the resistance - they were in fact collaborators themselves seeking to divert attention away from themselves.

Many of the collaborators were prostitutes and their relations with Germans were nothing more than business. Others were often young mothers whose husbands were in prisoner of war camps. The only way they could feed themselves and their children was to have a liaison with a German."