In our unit, we had a real adventurer. He was 35 years old and had for four years served in the Royal Canadian Mounted Police (RCMP). He could sure speak English so he was one of the translators, a very interesting person. He drove around on a one-cylinder Harley Davidson, only one I ever saw.

Also with us was a previous officer of the State Police and in charge was Lt. Huygen, who became a great friend. He wanted to make the army his career, but there was no army yet, so for the time being, we would be his army, he could order us around.

White Jaap, who was my contact and buddy during the underground days, had fallen in love and got married. His ambition was to go to the Dutch East Indies. We saw less and less of each other and he finally disappeared.

The Second World War did not come to an end with the defeat of Germany, the Japs kept on fighting, so the allies concentrated all their efforts to the east. Dutchmen were asked to join the expeditionary forces. Tim Rutten, classmate in grade school, signed up and was shipped to England for training. I went for a physical too to find out if I was still alive. The check up showed I had a bad case of heart burn, probably because of lack of necessary vitamins or something in that line. I figured I had seen enough misery and I thought I could make a contribution to help the country get back on its feet by serving here as long as was necessary.

One day, a fellow came over to us. He said he had a package (secret documents) to deliver, he was Jaapie (real name). He came from our headquarters and needed a chauffeur. He said we could get a small truck from the fire department. Sure I would take him. The Lt. said, "Go ahead". Off we went with the little red wagon, across country, looking and more looking. Jaapie said, we might as well see the rest of the country too. I agreed, but we were gonna run out of gas pretty soon. Oh well, we'd better fill up at a fire department.

"Okay, go ahead, you do the talking." And in the meantime, I held on to the secret documents. And so we went to Rotterdam first. We wheeled in for some gas. The chief was kind of leery, us from Civil Defence with a fire truck, and no gasoline? But Jaapie kept on explaining it was top secret. I kept my hand inside my top jacket and let a piece of paper stick out, and we were in a big hurry, no time for an army unit, blah, blah, blah. During the conversation, I had to turn around. I had a hard time keeping a straight face.

In the end, we did get a tank full of gas. This was the way Jaapie went about his business. From then on, we went to several events and always got in without paying.

Jaapie found an old camera, which did not work, put a strap on it and hung it around his neck. Then he had a card with PRESS printed on it, now we were ready to go.

We would come to the entrance gate, he introduced me as a reporter and himself as the official photographer. It worked all the time.

Yes, it was sunshine again. Everywhere, people were smiling. The sunshine came back after five years. The difference in attitude and mood from 1940 when we took a trip around after the invasion and now ... I would say, then it was sombre, now it was jubilant. 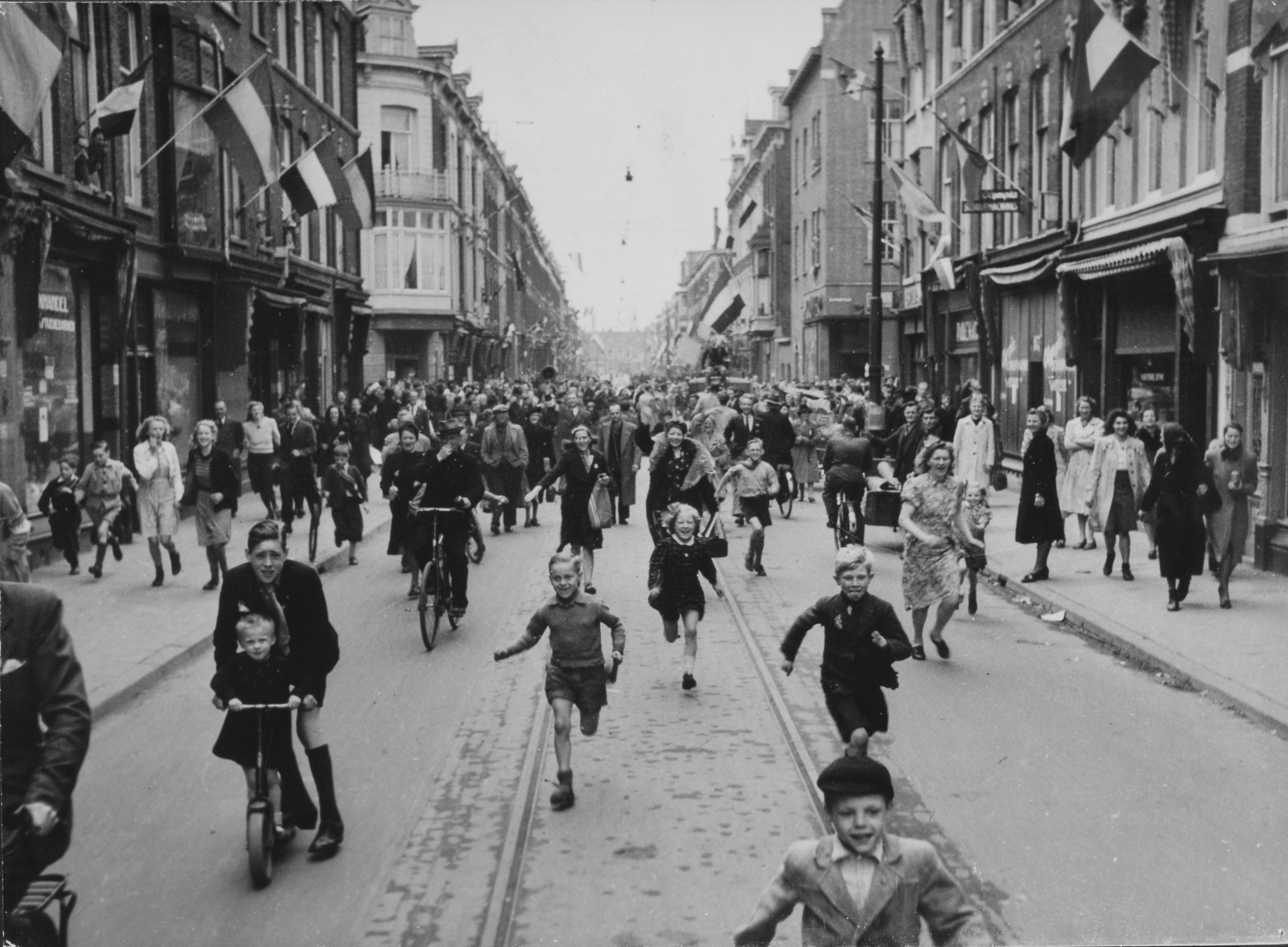 Holland after WW2, Nederland na de oorlog. YouTube video, 8:41 min. "Right after WW2 reconstruction of the devastated country was uppermost in the minds of the Dutch. The roads are still rather empty. There was still rationing."

10 things you need to know about the end of World War II in the Netherlands from DutchNews.nl, May 3, 2015.
1. Dolle Dinsdag (Mad Tuesday)
2. Operation Market Garden
3. Hongerwinter
4. Surrender
5. Chocolate and Cigarettes
6. Shooting at Dam square
7. Retaliation
8. Return
9. Wederopbouw
10. May 4 and May 5

Fifty Years of My Life (1939 - 1990): A Memoir by Jeff R. Noordermeer, 1945 - 1957. After the war. "We had survived the German Nazi agony but the damage they had done would remind us about this war for many years to come. Places in the open fields and wooded areas that were once an arsenal of war equipment had been our daily playground. Now the only reminders were the empty fox-holes and trenches, empty shells from small artillery which were set up in those trenches, tents, wooden boxes and empty gasoline cans. Still those leftovers from the war were very useful to many townspeople ... 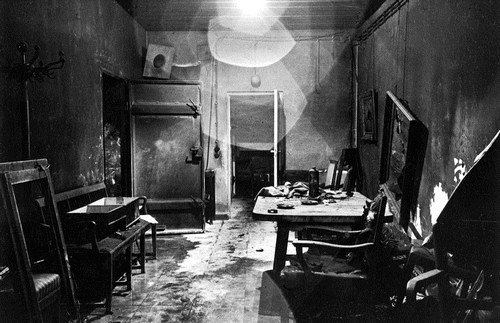 Hitler's bunker before he died
Google image from lifehacklane.com

Death of Adolf Hitler from Wikipedia.

Dutch annexation of German territory after World War II from Wikipedia. "At the end of World War II, plans were made in the Netherlands to annex German territory as compensation for the damages caused by the war. In October 1945, the Dutch state asked Germany for 25 billion guilders in reparations, but in February 1945 it had already been established at the Yalta Conference that reparations would not be given in monetary form. The plan which was worked out in most detail was the one made by Frits Bakker-Schut, and hence became known as the Bakker-Schut Plan . . .

The plan was largely dropped after U.S. dismissal of it. Eventually, an area of a total size of 69 km2 was allocated to the Netherlands. Almost all of this was returned to West Germany in 1963 after Germany paid the Netherlands 280 million German marks.

Many Germans living in the Netherlands were however declared 'enemy subjects' after World War II ended and put into an internment camp in an operation called Black Tulip. A total of 3,691 Germans were ultimately deported."

History of Netherlands: World War II and After. "In 1945, after the war in Europe, the government returned and the laborious process of rebuilding was begun. The Netherlands received more than $100,000,000 in aid under the European Recovery Program. The Netherlands was a charter member of the United Nations ...

An economic boom followed the postwar rebuilding phase, and under various socialist governments a highly developed social-welfare system was established."

Rebuilding the world after the second world war by Margaret MacMillan, The Guardian. "As many as 60 million dead, great cities reduced to rubble, families torn apart ... The second world war caused unprecedented hardship, but it also accelerated change . . .

At the end of the first world war it had been possible to contemplate going back to business as usual. However, 1945 was different, so different that it has been called Year Zero. The capacity for destruction had been so much greater than in the earlier war that much of Europe and Asia lay in ruins. And this time civilians had been the target as much as the military. The figures are hard to grasp: as many as 60 million dead, 25 million of them Soviet. A new word, genocide, entered the language to deal with the murder of 6 million of Europe's Jews by the Nazis.

In Germany, it has been estimated, 70% of housing had gone and, in the Soviet Union, 1,700 towns and 70,000 villages. Factories and workshops were in ruins, fields, forests and vineyards ripped to pieces. Millions of acres in north China were flooded after the Japanese destroyed the dykes. Many Europeans were surviving on less than 1,000 calories per day; in the Netherlands they were eating tulip bulbs."