Chapter 81: Beginning of the End

Back at the garage in our motor pool, I was asked if I would be the chauffeur for the Captain. Wow man, being his driver, absolutely, it would be an honor. I heard so much about the biggest boss in the resistance who was now the biggest man in rebuilding this part of the country.

When I met him he made a big impression. A big forceful, military man with a strong commanding voice. I learned that when he spoke, everybody listened.

I got the nicest car in the pool, man, I was prouder than a peacock on a barn roof. It was so far a rag tag army we had, most people had a blue coverall with the CD band. I did not have a coverall so I made do with an old Dutch army jacket I found somewhere, and the CD band of course.

From now on, I had a real nice job, driving big shots around, not only the captain, he lent me and the car out to all kinds of important personages. And of course, all over the country for meetings, etc.

One time, the boss was sitting in the back seat, which he always did, on our way to Apeldoorn, the summer residence of the Queen, when a front wheel came off. The wheel got caught underneath the running board, hit the back wheel and ran off the road. Some screeching and dust flying woke the old man up. When he realized what had happened, he could not praise me enough for keeping the car on the road and preventing a crash. I did not tell him, there was nothing to it.

Sometimes I write events in life and I run ahead of my self. For instance, when we looked around after May 5, 1945, we met the German army again. This time it was a defeated army. It reminded me of CRAZY TUESDAY in September 1944 when they tried to escape to Germany, but were forced back by the SS. They looked even worse now because they had no more guns, their staying power during occupation. Funny maybe, but nobody showed any hate, an occasional shout or swear word, but nobody threw stones or rocks when they marched by.

What an unbelievable difference: five years ago, they came riding in on trucks and carriers, with spotless uniforms, helmets with identification numbers and badges. Now they wore anything they could get their hands on. No more guns, no more helmets, no more gas masks or shovels, or anything which makes a soldier. Nothing that even resembles the most powerful and best trained army in the world, in history, only five short years ago.

What made them look real bad, besides being unwashed and unshaven, was the way they walked. Everyone his own gait, out of step, some with bandages around their heads, looking right and left or down to the ground. This was the view we had been waiting for for so long, and still you didn't feel as happy and jubilant as you figured you would. But I was glad it was all over.

When many boys signed up to join the expeditionary forces, I was thinking maybe I should not. The reasons: first, only the Japanese were left, Germany and Italy were kaputt, it wouldn't be long for the Japanese because they were losing on every front too. Besides I was 25 years old, and things would become normal again in a few years, so I would stay with CD until my usefulness no longer was required. If I stayed, they would want to make a soldier out of me for sure but I didn't feel attracted to that. Sooner or later civilian rebuilding would start, and to be in it would be much more of a challenge than spending your time in the army where you were always told what you had to do.

In the meantime, I kept driving important people like Mr. Pon from Pon's Garage. I didn't know why him, you would think he had enough cars of his own. There were thousands of questions, but no answers.

My captain also had a big Harley Davidson motorbike. He must have scrounged that from the Canadian Army. He asked if I wanted to try it. Of course. Not having driven such a machine for years, I was a little careful at the beginning. It did not take me too long to get the thing up to 85 mph. What a thrill - in other words, I liked it.

When Japan capitulated in August 1945 and the Captain said I should go to the barracks for some training and a uniform, it was time to sign off.

I had taken my Sten gun already home as a souvenir. Prince Bernhard, the husband of Queen Juliana, Supreme Commander of the Dutch Internal Fighting Force, sent me a lapel pin and a nice thank-you note. 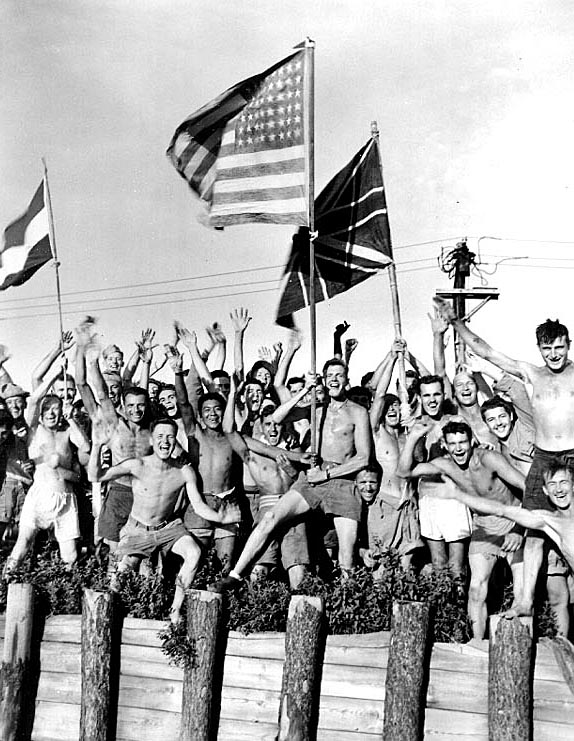 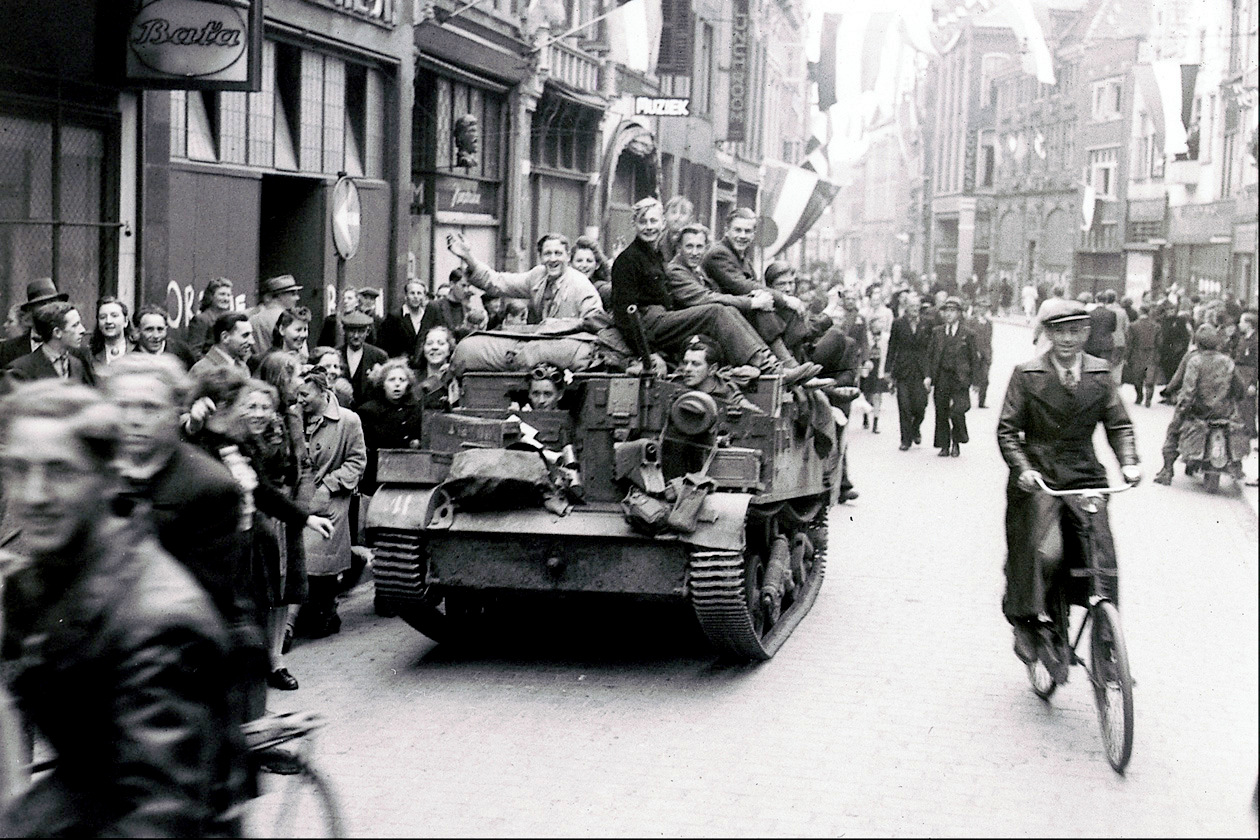 August 1945: Liberation of POWs in Images by Callie Oettinger. 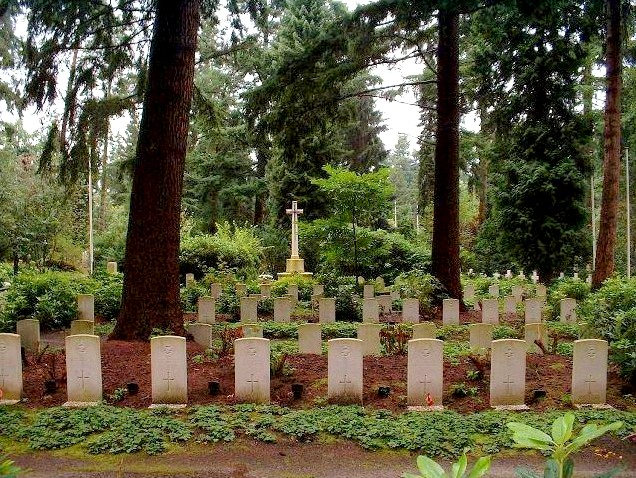 File 987. Amersfoort Oud Leusden Cemetery Allied War Graves. "Cemetery south of the city of Amersfoort, near village Leusden-Zuid. It completely is (unintentionally) an airwar cemetery with all 233 casualties airforce men, one Arnhem paratrooper included. From 1942 until April 1945 approx. 185 men crashed in the vicinitity and found a resting place here. Another 33+ airmen washed upon the Southern shore of the lake or were brought in by fishermen from the Old Zuydersea villages Bunschoten-Spakenburg and Elburg, at least 7 of the airmen from the water were American. They were moved to Margraten (USA "Netherlands") war cemetery in March 1946. All 10 unknowns on this field of honour are also from the Lake. In July 1947 the cemetery received 18 war dead for reburial from the Zuyder Sea village of Urk and 4 from Amsterdam."