While our new house was being built, I was boarding in the big old house of Dr. Staal, now occupied by old Deacon van de Hengel. My oldest sister Annie took care of him, and our mother. I stayed there until our new home was pretty near ready, then we married and moved in.

The good Lord sure blessed me with everything a person could ever wish for. Getting through the war without a visible scratch, Margaret through the mine field without being blown up, and now a new house, new bride, new truck and plenty of work. Most people could only dream about these things that early in life. Why me? What did I ever do to earn all that happiness? There were many questions in life we could not find an answer to. So let us be thankful and enjoy it.

This dream, however, was only short lived. Jake de Groot, one of our neigbors, came over one day and talked about going to Canada. I listened and agreed. Sure, Jake, I heard a lot about the country that liberated us. If the people were like the soldiers I had been in contact with, it sure was something you should look into. He said there was going to be a presentation and talk about Canada. "I have been invited and I want you to come with me." "There is no use for me to go, Jake, because only farmers can get in, and you know I am no farmer."

On his insistence, I did go along and listen to a representative from the Canadian Pacific Railway. He told us all about that enormous big country that went from ocean to ocean. About Winnipeg, the big city where the west began. The streets of Winnipeg were so wide: there were four lanes of traffic with parking on both sides and streetcars running in between. He said the streets went by numbers so it was always easy to find your way around.

Farms were plentiful, and you could expand as much as you wish, etc., etc. Jake was so impressed, he said, "Let us go sign up." "Go ahead, Jake, lots of room there." "Oh come on," he said, "you come too." He would not take no for an answer.

To please Jake, we went to the Hague to sign an application. I was sure this was the end for me. Not so. Just a short time later, I got a letter. My application was accepted and I was hereby advised to get X-rays taken and a medical report.

I rushed over to Jake and showed him the papers. "Did you get yours too?" "No, nothing." (He did not get his until three years later.)

It hit us like a thunder clap. The last thing I had hoped for. Now what? Jake encouraged us to go. "Go man, you may never get another chance."

Margaret and I talked it over at great length. Our reasoning went something like this. If we went, I had to sell the business, which was easy. But if we didn't make it in Canada, and we had to come back, with the trucking business gone, I would be kaput. We would have to go to a farm for one year before we would be on our own. Both the farmer and the two of us have to sign that contract. I couldn't milk. He would probably fire me, or ask the authorities to get out of the contract because of my incompetence. I wouldn't blame him.

But we also had to consider the past of the world. If I read history, fighting had been going on since Adam and Eve got booted out of Eden. Their own kid killed his brother. Here in Europe, they had been fighting each other for at least a thousand years. WWI was supposed to be the war that ended all wars. Only twenty years had past and they were at it again, much worse than all previous ones.

On the other hand, let us look ahead. If we were like most married people, some day we would have children, and they would grow up, what would they do with their lives? Work in a factory? But if they want to start a business for themselves here in Holland, it was practically impossible. Maybe we should go, not for ourselves, but if we ever get offspring and they want to be free, we would never forgive ourselves if we stay here. So we had better go. We were still young and if anyone could make it, together we two could do it. "Why don't we make it a honeymoon trip? It is a first, yeah, why not?"

We wrote back that we would go but please give us a little more time to straighten out our affairs here. Sell truck, bikes, furniture; find a suitable tenant for our home and a thousand more things to be done. Okay, you could go July 19, 1948, no other extension would be given. Thank you, that would give us four months. 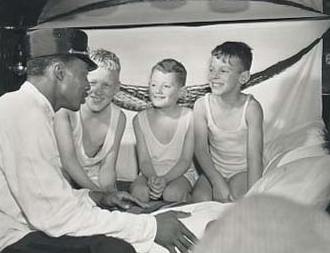 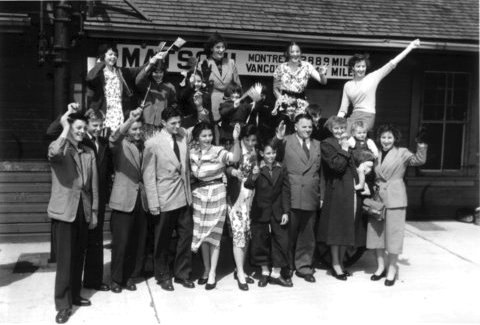 Mackenzie King makes a statement on immigration. "On 1 May 1947, ... Mackenzie King made the following declaration in the House of Commons: 'The policy of the government is to foster the growth of the population of Canada by the encouragement of immigration.' ...

Canada opens the gates to displaced persons: Nearly 250,000 displaced persons and other refugees were admitted to Canada between 1947 and 1962.Of the 165,000 refugees who entered this country between 1947 and 1953, Poles comprised the largest group (23 percent of all those refugees admitted). In descending order of numerical strength were Ukrainians (16 percent), Germans and Austrians (11 percent), Jews (10 percent), Latvians (6 percent), Lithuanians (6 percent), Magyars (Hungarians; 5 percent), Czechs (3 percent), Dutch (3 percent), and Russians (3 percent). All told, these groups comprised 86 percent of the Europeans allowed to enter Canada in this period."

The Peopling of Canada: 1946-1976. "The end of the Second World War heralded important changes in Canadian immigration policy and outlook that altered Canada in unsuspected ways. The first post-war immigration policy was Prime Minister Mackenzie King's directive of May 1, 1947. It stated that the policy of the government would henceforth be to foster the growth of the population of Canada by encouraging immigration which would neither alter the fundamental character of Canadian society, nor exceed Canada's 'absorptive' capacity. In other words, the Canadian government approved of the idea of a cultural melting pot, in which all immigrants would abandon their cultural heritage to become part of the dominant English-speaking, or French-speaking, culture. The mandate of federal policy was to select immigrants from the preferred ethnic groups, which included British, American, and northwestern European individuals. Canadian government policy well since the 1920s reflected the prevailing belief that these groups were easily assimilated, as they were culturally and linguistically similar to the dominant English group.

The Canadian government actively recruited preferred immigrants such as the Dutch from Holland. The 'Netherlands Farm Families Movement,' an initiative begun by the federal government in 1947 to entice Dutch farmers to come to Canada, brought thousands of Dutch, comprising the third largest group of immigrants who came to Canada, in this period. In common with other post World War II immigrants, the Dutch came to Canada to escape intolerable living conditions in their homeland. Holland was crowded because it had managed to sustain a fairly high birth rate throughout the war years. In addition, the country was war-torn, and tens of thousands of hectares of arable land had been submerged under sea-water by the invading Nazis."

The Reach P3348 Welcome for large Dutch immigrant family at the Matsqui CN station, April 1952. "Dutch immigration reached significant proportions after WWII. Many Dutch people had gained a favorable impression of Canada through their contact with the Canadian armed forces during the liberation of Holland and with an already established Christian Reformed Church and economy that encouraged agricultural pursuits, Abbotsford was able to welcome many Dutch immigrants."

Canadians of Dutch descent from Wikipedia. "After World War II a large number of Dutch immigrants moved to Canada, including a number of war brides of the Canadian soldiers who liberated the Netherlands."

Arrival of 200,000th postwar Dutch immigrant merited no publicity Dutch-speaking people large part of early Canadian history. "Dutch-Canadians usually assisted newly arrived Dutch immigrants in their efforts to acclimate. Those who had settled in Canada before World War II served as a vanguard for the stream of immigrants who arrived from 1947 on. Newcomers in some instances were encouraged by people from well established Dutch American groups. Dutch Canadian communities which for years had numbered just a few dozen of people, in a short time swelled to many hundreds. This was repeated in numerous locations. Most of these 1950s concentrations, with few exceptions, each have become significant contributors to the Canadian mosaic in their area.

Although most Dutch immigrants traveled to Ontario and beyond, some small Dutch immigrant concentrations took root in Nova Scotia. Particularly in that province's various agricultural segments, Dutch immigrants soon were noted for their innovations on and off the farm, and as leaders in farming organizations. "

Dutch immigration to Canada. The Story of Dutch Immigration to Canada. To emigrate is "to leave behind a world, a life, a culture". To immigrate is to "enter a new country as an alien, the settle there, to work". This is what over 100,000 Dutch immigrants did after World War II. "After the war, the country was in rough shape. Many towns, homes and factories had been bombed, the economy was in shambles, it was hard to support your family. People saw no future for themselves and their children ...

Canada had a low population density and lots of land. The Canadian government relaxed the rules about immigration (which only allowed farmers before) and let professional, technical and business people to come too. Canada was a place that could offer freedom, and a new start for many people, and opportunities for their families.

Dutch. The Great Depression and the Second World War curtailed Dutch immigration until 1947, when tens of thousands began to flee from a war-devastated and economically ruined homeland. Initially the immigrants, as in the past, came from the agricultural sectors, but by the mid-1950s they included many skilled and professional workers. Ontario became a particularly important destination, followed by Alberta, British Columbia and the Maritimes. By the late 1960s some 150 000 Dutch immigrants were well established in all provinces (with the exception of Newfoundland), but particularly in Ontario and the urban areas of the western provinces. These communities served as beacons of welcome and attraction for later Dutch immigrants."

Farewell Holland. Post-war emigration. "Triggered by the ruins of the war, the rampant housing shortage, and the bleak economic prospects in the agrarian sector, emigration from The Netherlands peaked in the fifteen years after the second world war. Emigration was actively encouraged by the Dutch government. The most popular destinations were Canada and Australia, and to a lesser extend the U.S., South Africa and New Zealand."