It was another two days before we landed in Quebec City. We could not embark immediately, so most people hanged over the railing to get their first impression of the new land.

In my eyes, what I saw was a big disappointment. They started to unload the freight, out off our ship. Huge big boxes were moved by two-wheeled hand carts. In Rotterdam, they used motorized fork lifts. Was this a modern city? Or didn't they know there were other and faster ways to move those crates?

We had some time before our special emigrant train departed, so we looked over the old city, it kind of reminded us of home. Narrow and twisted. I got a haircut for 35 cents. Then we saw a store which sold oranges. Wow, we did not see them for a long time, our mouths watered, and looked at the price 45 cents for twelve. We walked in and in plain English, I order A DOZEN. The man said, "A thousand?" Ha, ha, ha, he probably did not understand our accent too well. I knew we would have trouble with the language because I learned only Yes and No, but this was ridiculous. I told him, yes, that was ok but I couldn't wait for you to count them out, so for now give me 45 cents worth. It's amazing how good a person can talk with his hands, if your tongue did not cooperate.

The train trip which lasted 48 hours, on the clock 46, because twice we came into a different time zone.

I got another disappointment, when we came through rural Quebec, the farmers were making hay with horse and machinery which was already obsolete in the Netherlands. Had the man from CPR been telling us fibs about Canada? Was he only interested to send immigrants to the end of the Canadian Pacific Railway Let's not worry, we knew already this was a big land. For two days and nights, in a train which only stopped for water and oil and change of locomotive, and that was not even half way across.

We never got bored. We looked more than we ever did before. How was life on this trip? In the ship, we slept in bunk beds three high. A washroom with twenty bowls, side by side. Here in the train, we had a toilet and wash bowl, but no bunks. If you wanted to sleep, you closed your eyes and pretended you were flying high and dry in the sky.

The fact was it was a very dirty, or rather extremely dirty ride. If you opened the window, the smoke of the engine and the grit from the tracks and coal hit your face like little pellets. There was a car where you could buy something to eat and drink. We met a man from Switzerland, also a immigrant on his way to the forest in the west, he was a woodcutter by trade he explained. Several others went all the way to British Columbia, however, our special train went only as far as Winnipeg.

We stopped in Kenora and had time to walk around outside, I thought they changed engines here. Little did we expect to see this town again in four and a half months. We had been travelling through western Ontario past the North rim of Lake Superior, we saw nothing of that since it was night time. Soon we entered Manitoba, here the landscape changed from bush to prairie. The farms were really big, wheat fields as far as one could see, and neat too, all laid out in square blocks. It started to look a lot better. We didn't see any horses, only tractors. We wished the train ride would come to where we were going as the wooden pews we were sitting on were getting harder and harder. I sez, "It may be our first and last trip in this train. We'd better enjoy it." 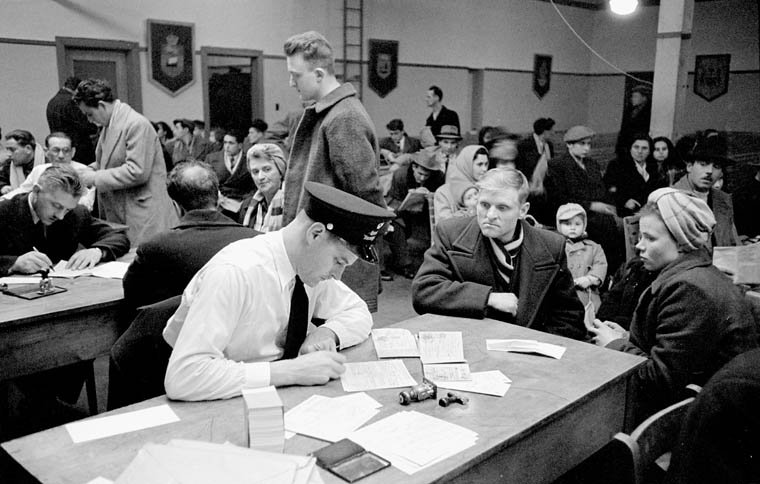 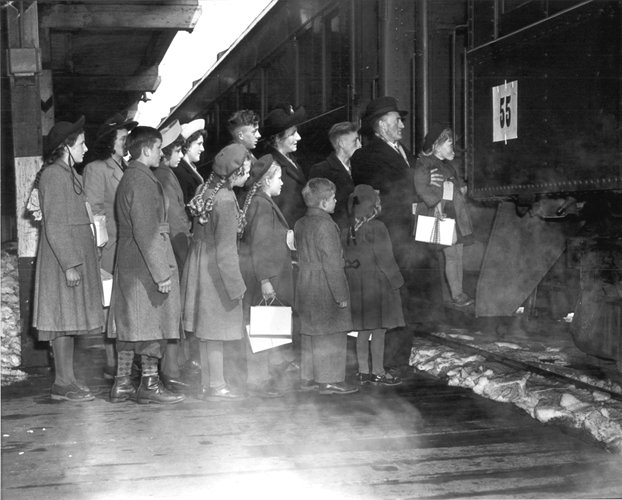 Dutch Immigration Through Pier 21 by Carrie-Ann Smith. "One element that comes up again and again in the Dutch arrival stories is the 'kist'. The government of the Netherlands would only let people bring a small amount of money out of the country but they could take as many possessions with them as they liked. A 'kist' was a huge wooden crate for household items. One family did indeed bring the kitchen sink and another visitor told us that his mother brought the rock that they used to hold their front door open because she did not know if such a thing would be available in Canada."