When winter came again we decided we were going to move, but where to? Well, during the summer, Americans often said, "Why don't you come to the States?" Why should we do that? The answer always was much more opportunity. So okay, we did apply for going south.

In Winnipeg, the nearest big city, we learned that immigrants were let in on a quota system. This went by the country in which you were born, in our case, Holland. So, "We will put you on the list, and when your number comes up, you will be notified." End of that chapter for now.

Leaving Sioux Narrows, we decided to go to Fort Frances: 150 km south and right on the border of Minnesota and International Falls. When our number ccame, we don't have to go too far.

Now to find a job in this paper mill town. With winter coming up, it may not be too easy. I was interested in automobile or related services. Immediately, I found work at a small dealer: Tyne's Motors Body Shop. They sold Austin, Morris and Willy's, none of them a big seller. They had one mechanic and one body man. Here I learned from Harry how to take out dints, weld with an acetylene and oxygen torch, prime and paint cars.

You had to have a licence for mechanic or body work in Ontario. I knew a little about auto engines, but I figured that if I learned about body work I could see the results of my labor, like a nice painted car. If you do mechanical work, you close the hood and nothing was showing, no matter how good a job you did. And yes, it was kind of satisfying to make an old wreck look new again. I felt so confident in myself that I bought an awful looking l936 Dodge. (Not so good looking, said the horse trader when he sold a blind horse.) I gave it a nice two tone paint job, and now it was nice looking. It did use some oil. When we went back to Sioux Narrows to see Paul and Kitty, it took 8 litres of oil on this l80 mile round trip.

After school, a boy from high school would come in to clean and sweep the floor in the shop. One day, him and old man Tyne got into an argument. It got so hot, Tyne said, "You are fired, go home." The boy answered, "You go on home, get out of my way, I have work to do." He kept on sweeping until he was done. I presumed that was the end of the kid's job, but no way. The next day, and the ones thereafter, he came back as if nothing had happened.

I worked there for less than a year, when the foreman of the local Chevrolet dealer, McVey, got hold of me and asked if I would come to work for them. Yah, what's the scoop? He explained they had a body shop and a paint booth with all the equipment, but nobody to operate it. I would be in charge and run the place as I saw fit, like it was my own: make estimates, repair or refuse the jobs as they came in. Besides, it would pay more too. How could I refuse? Margaret said, "Good for you." But now we had to move again. This was the seventh time. We moved to Third Street and only one block from the garage.

I started off slow, but soon more work came in. To keep up, I went back many a night. Still that was not enough, work was apparently satisfactory, so the big boss said, "If you need help, I'll get you one." "Please do." So I got a boy fresh from high school. He could sand and mask and wash and got the vehicles ready for painting, which helped a great deal.

One day, a 1946 Chevrolet Sedan came in, the right side was damaged, like it was scraped from front to rear. It had been stolen in Peterborough, somewhere in southern Ontario. The police found it abandoned in a ditch. The insurance had to stand good for it. Rather than bringing it back, they decided to sell it as is. So I put in an offer for $600 and got it. I fixed it up, and now we had a real nice car, not an oil burner any more.

In the mean time, Margaret got herself a job in a bakery across the street from the house where we lived. They were Italians. The old people came over, had planned to make lots of money in Canada, then go back to Italy. However the gold was not lying on the streets, they had to work for it. While they were gathering, kids were born, first one, then the next, and so on. When they finally had enough to retire and go back, no way would the children move to the old country. So now they could only dream, and dream and feel sorry for themselves.

Then Margaret got a job as seamstress in an alteration shop. This was a place where the clothing stores brought their sold items to get fitted or altered to the customers' needs. They advertized over the local radio, like: "We have the best needle worker in town." I knew that all along, but now everybody else knew it too.

Fort Frances was a paper mill town, belonging to 3M. It was originally settled by the French as it was on the route of the Voyageurs, the first settlers that crossed Canada by canoe. The hospital was named after one of those guys by the name of La Verendrye, or something.

For entertainment in the winter, we walked to the only theater in this town of 8,000. They had a lot of Western movies that we enjoyed.

The 1946 Chevrolet Fleetline and other models
were basically prewar designs,
but pent-up demand made them great sellers. 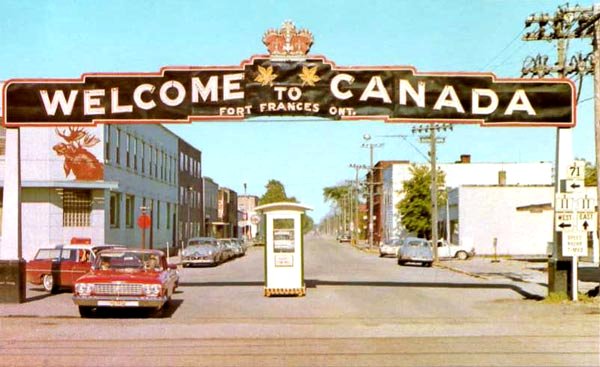 History of Fort Frances, Ontario, Canada. "Jacques de Noyan was the first European settler to reach the Rainy Lake area when he spent the winter here in 1688-89. LaVerendrye soon followed in 1731 when Fort St. Pierre was built. The Northwest Company establish a strong point in the area in the 1780's along their 'Voyageur Highway' which was a crucial part to the Company's trans-shipment of goods. In 1818 the Hudson Bay Company established a permanent post along Rainy River. On June 1, 1830 the Governor of the Hudson Bay Company, Sir George Simpson visited the 'Lac la Pluie' with his wife Lady Frances Ramsay Simpson and in honor of her visit, he renamed 'Fort Frances' on September 25 of that same year. The Town of Fort Frances was incorporated April 11, 1903."