Chapter 111: Disaster in Our Fatherland

During our stay in Fort Frances, a big disaster struck in l953 in Western Europe. The Atlantic ocean boiled over into the North Sea, which smashed dykes and inundated villages and towns. South England and Belgium were hard hit, but the brunt of the storm fell upon the Netherlands. It seemed as if the sea took revenge. Hundreds of years ago, the Dutch pushed the seawater back and claimed the land, put up dykes then pumped the water out. It has been a fight ever since to hang on to the territory which is below sea level. But now the sea made an all-out effort to reclaim the lost land with interest, because it took not only some of the land but also a couple of thousand lives.

The people of those lowlands were a stubborn breed. As soon as the storm was over and the dead buried, they went back to work again, to push the sea back once again. Drives for relief started all over the world. In Canada, the government helped by making donations tax deductible.

Amongst the immigrants from Holland we met in Fort Frances was a couple by the name of John and Teresa Lijzer. He was our milkman and delivered anything in dairy products we needed, on his regular run. He had come with two brothers-in-law and wives, the whole shebang. But to him and his wife, the winters here were too long and severe, same as our thinking.

We conversed about what we could do about that. John said we should go to southern Ontario. They said it was much warmer there. No, John, we should go to British Columbia where the weather was the same as in the Netherlands. At least that was what someone told me. Maybe you're right, maybe I was right, who knew? Would you settle for it if we threw a coin in the air? Heads, west. Tails, south? We just went through five years of war, we didn't want to start another one. Yes, it was settled, a toss of a coin would decide our future. We flipped, and southern Ontario won. We would have to wait until we could travel the only road across Canada, because that was even further north than where we were living. 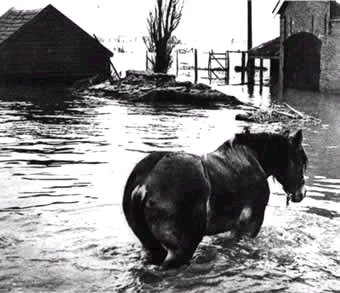 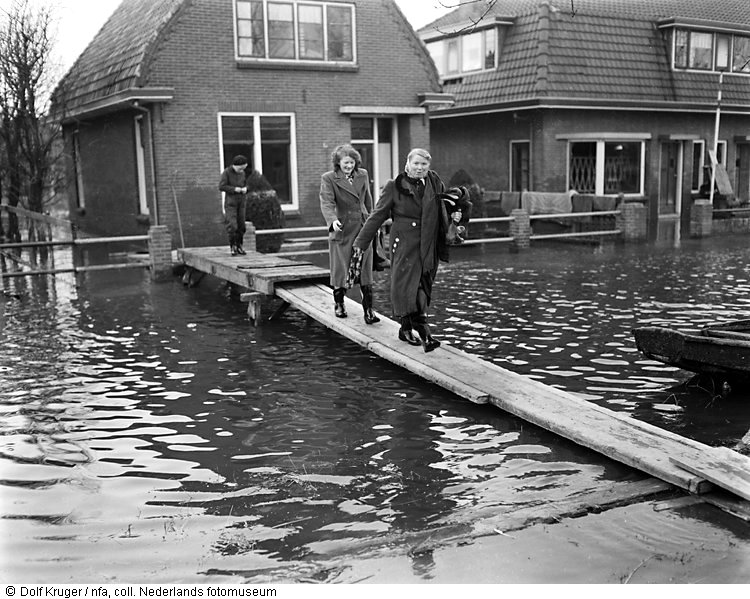 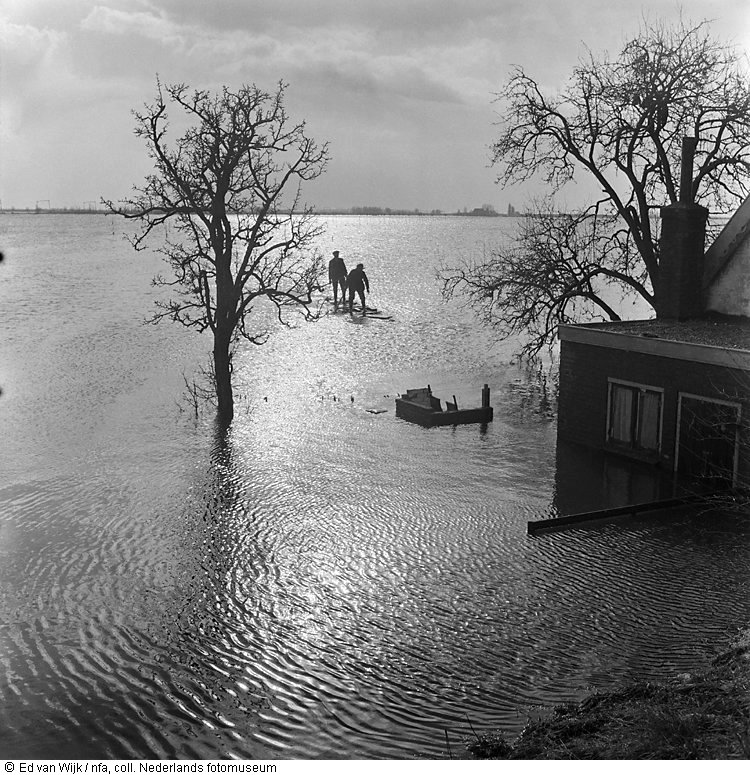 1953 Flood in the Netherlands

North Sea flood of 1953 from Wikipedia. "The 1953 North Sea flood (Dutch, Watersnoodramp, literally 'flood disaster') was a major flood caused by a heavy storm, that occurred on the night of Saturday, 31 January 1953 and morning of Sunday, 1 February 1953. The floods struck the Netherlands, Belgium, England and Scotland.

A combination of a high spring tide and a severe European windstorm over the North Sea caused a storm tide of the North Sea; the combination of wind, high tide, and low pressure led to a water level of more than 5.6 metres (18.4 ft) above mean sea level in some locations. The flood and waves overwhelmed sea defences and caused extensive flooding. The Netherlands, a country with 20% of its territory below mean sea level and 50% less than 1 metre (3.3 ft) above sea level and which relies heavily on sea defences, was worst affected, recording 1,836 deaths and widespread property damage. Most of the casualties occurred in the southern province of Zeeland. In England, 307 people were killed in the counties of Lincolnshire, Norfolk, Suffolk and Essex. 19 were killed in Scotland. 28 were killed in West Flanders, Belgium."

Feature: The great flood of 1953 by Anne van Arragon Hutten, Dutch - The Magazine. "Among Holland's more traumatic collective memories is that of De Ramp (The Disaster), the great flood which crashed through protective dikes and submerged farmland, hamlets, towns, and cities. No one used the word tsunami back then, but survivors spoke of a ten-foot-high wave that rolled inexorably across the polder land, destroying a large part of what it encountered. ...

This flood, the worst in modern Dutch history, occurred during the night of January 31 - February 1, 1953. Hurricane force winds from the northwest drove an exceptionally high spring tide to launch an unprecedented assault on the man-made constructions protecting parts of the provinces of South Holland, Zeeland, and Brabant. All along the dike people stood and watched the rising water, relentlessly climbing ever higher. Wherever a weak spot in the dike was found, sandbags were brought in by the truckload and packed in dense formation to prevent flooding. In the end it was not enough, and the dikes gave way. The bulk of them broke between three and six a.m. while the population was asleep.

An area as large as the entire province of Zeeland was flooded. 1836 People died, and 72,000 others were forced to leave their homes. 500,000 acres of land were flooded. Field crops were destroyed on 13.7% of the total arable land of The Netherlands. This included almost a quarter of the country's wheat, slightly more of the barley, 37% of the flax, and over half of the onions grown nationwide. ... Along with the human toll, some 25,000 dairy cows drowned, 1500 work horses, half the national hog count, and 100,000 hens."

The Flood of 1953. Extra edition of the Dutch News in 1953, in which the first images are shown about the devastated area. Video: First news about floods 1953. "In 1953, the Dutch were once again confronted with the power of the sea. The colossal disaster happened on February the 1st. It was to be one of the biggest floods in the history of the Netherlands."