I was good friends with Dirk Pothoven, owner of the only for-hire automobile, taxi, and bike repair shop. He let me have his rattling, quivering bucket of bolts. I drove it to the vet who was also the examiner, where Dad had got his permit nine years ago.

Now the world opened up in earnest for me. A couple of years ago, the city opened the City Square, called "IT HOF", to buy and sell cars and motorcycles on Wednesday nights. I had gone there practically every week to see what was cooking and to learn.

It's amazing what was for sale: motors I never heard of, all shapes, models and sizes. Traders from all over the land came to sell their machines. And sometimes they had crap which was totally worn out, but to make it sound good, they filled the transmission with saw dust and heaven knows what all the other tricks they came up with.

Well, I reckoned I learned enough to make a decent choice, so I bought a two-cycle "Douglas" for 15 Dollars. It did not start too good but I always got it going by pushing it - that is, I would run like hell, jump on it and away it went.

One time at night, I had to stop for a railway crossing. While there, a cop came up to me and wrote a ticket for not having a tail light and another for not having a licence plate light. I argued that he could not give me two tickets because only one light bulb burned out. But this was to no avail. He said he knew the law and he represented same. I hadn't seen him being on his bike, otherwise he would never have caught me. I went to court to explain to the judge it was only one bulb, but I might as well have been talking to the wall. There was no sympathy: either pay or go to jail.

My next bike was an F.N. - Fabrique Nationale, a Belgian 250 cc flathead with the flywheel in the open. Oh, nice big machine, really a pleasure to ride. Only one thing wrong: the flywheel would not stay put. It loosened up all the time, so I got it welded onto the crankshaft. It never loosened up after that. Of course this was not proper because one could never take the motor apart to be repaired, but we shall not cry murder before the corpse is found.

My next motorbike was the famous DKW, a German creation. The letters stand for Deutsche Kraftfarzeug Werke - nicknamed Das Kleine Wunder (The Little Wonder). It was indeed the most advanced, most dependable bike in existence. You could drive it all day with the throttle wide open and it would stay together.

In Huizen, a small place about 15 km away, was a cinder race track. In summertime, they had races every Sunday afternoon. When I got my own bicycle, I did not miss many races. I thought this was the most daring, dangerous, exciting sports event in the world.

They were lined up side by side, and when the flag dropped there was an enormous roar and cinders flying as if they were shot out of a canon. There they came, neck in neck, elbows touching and left foot dragging, a cluster of red hot machinery run by devils. Their face masks and glasses looked like it anyway. Maybe they were, because how was it possible to steer to the right while making a left hand turn? Yet they were doing it. It was not always smooth sailing, sometimes they got tangled up and then all hell broke loose.

One time in particular was forever imprinted on my mind. They started off with a terrific roar. In the first turn, something happened: parts and pieces were flying all over, one wheel all by itself went straight up in the air for about 5 meters, came down, jumped again and kept on going until we lost sight of it. I always thought kangaroos lived only in Aussieland, but I saw a wounded one that day.

Once a year, we had the biggest race of all. This was held in Assen, 150 km away. It was sponsored by the manufacturers - only the latest and the best models showed up. There was a race in every European country once a year, called Isle of Man TT, which came from English Tourist Trophy. Mostly, the races were dominated by motorcycles from British manufacturers: Norton's, Velosette's, BSA's, etc.

One time, the British boasted they had a single cylinder 500 cc with an output of 52 HP. France with their Motobécane, Belgium with FN and the Dutch with Eysink were not of much competition. Sweden had one strong contender with the Husqvarna.

The English victories came to a sudden stop when the Germans came on the scene with BMW in 1935. Hitler woke up the sleeping giant and put him to work. From then on, they shamed the rest. The Germans won every race in every country and in every class, which was in the 125, 250, 350 and 500 cc.

In 1938 and 1939, the Italians came to challenge with a new concept in motorcycle races, with four cylinders in the 500 cc. This excitement all came to an end with the start of World War II, from now on it became a race for survival.

Isle of Man TT from Wikipedia.

The German Golden Helmet by Christian Weber, from SpeedwayPlus.

trademark: Gilera type: 500 cc Rondine with supercharger, year of manufacture: 1937, country of origin: Italy, Gilera 500cc Rondine / 35k . . . The Gilera Rondine was designed by Taruffi, and was very advanced for its time. The model was an inspiration for the next generation of Italian motorcycles . . .
With the use of a supercharger, the Rondine produced 80 HP at 9000 rpm, very high for that time. The Rondine had many successes, such as the race Milan-Tarente in 1938 and the European sidecar race of 1939 where speeds of 180 km/h were reached. The Rondine has become famous with the record of Piero Taruffi; in 1935 he reached the speed of 244.5 km/h with an unfaired model of the Rondine, and in 1937 he reached the speed of 274.2 km/h . . ."

The Vintagent: The World's #1 Vintage Motorcycle Site. "Arthur Frederick Wheeler was born on August 5 1916 at Epsom in Surrey . . . Against at least 100 competitors on the post-war race grids, Wheeler was always in the first 10 past the chequered flag on his 250 cc Triumph and 350 cc Velocettes . . . died aged 84, was perhaps the last Corinthian in the tough and dangerous world of motor-cycle racing, and was still competing within five months of his death." 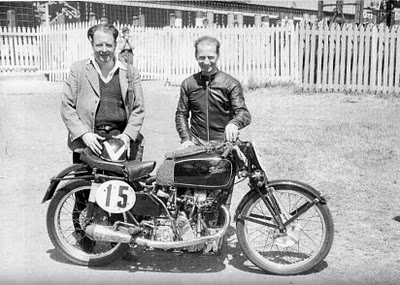 Douglas Motorcycles. "Douglas was a British motorcycle manufacturer from 1907 - 1957 based in Kingswood, Bristol, owned by the Douglas family, and especially known for its horizontally opposed twin cylinder engined bikes and as manufacturers of speedway machines." 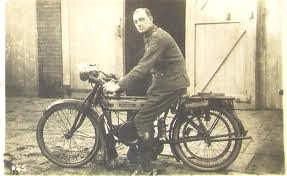 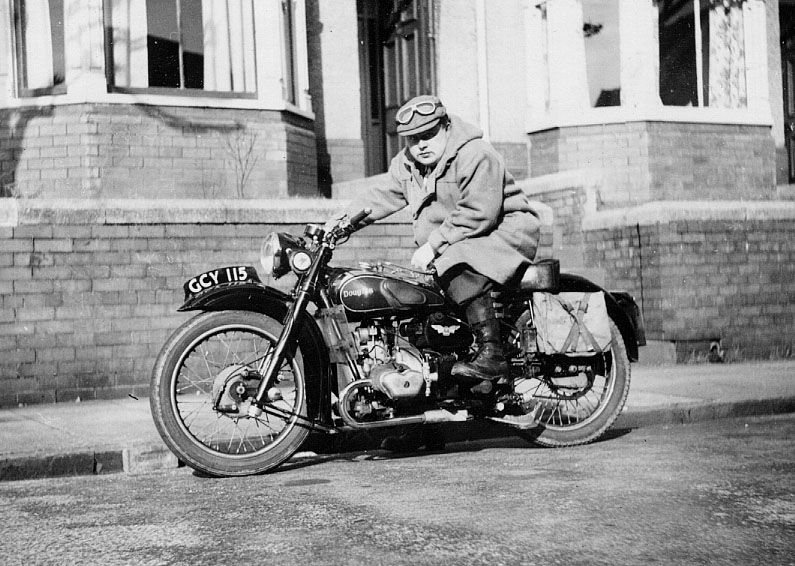 FN (motorcycle) from Wikipedia. "FN (Fabrique Nationale de Herstal) was a Belgian company established in 1899 to make arms and ammunition, and from 1901 to 1967 was also a motorcycle manufacturer." 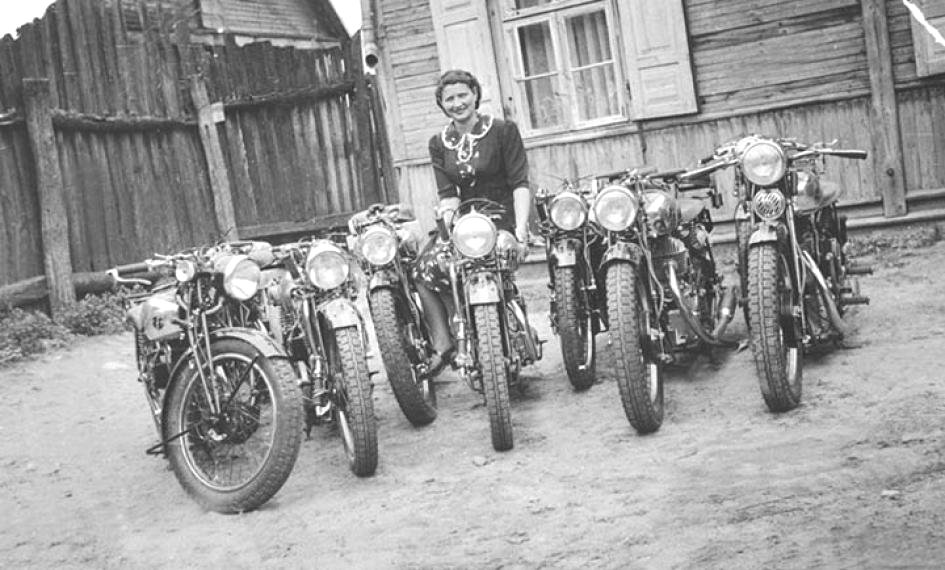 The FN Motorcycle posted by Michelle: A true story by my father-in-law. "I was aware of many stories that occurred in [Germany] Europe during war time, many of them were told to me by a friend who was in the Dutch underground. Properties and valuables were expropriated from private citizens, anything considered of value or use to the Nazis, including motorcycles and automobiles. Motorcycles were much easier to hide than cars."

"I had already spoken with three people who had hidden their motorcycles on their properties. When the Nazis came to search for them, the bike owners told them they did not have them any more. Their standard answer to that was: 'We will search your home and property and your friends' properties, if we find it, we will shoot you!' All three of these people that told me their story handed over their motorcycles for fear of their lives."

"I once asked my friend Dan, of the Dutch underground, how the Nazis had knowledge of who owned motorcycles. He replied that they knew from their informants long before they moved into a country who owned anything of value. Ironically, my friend Dan, an automotive expert, spent a great deal of time breaking into German military compounds and stealing their vehicles."

Das Kleine Wunder - the story of a remarkable engine. 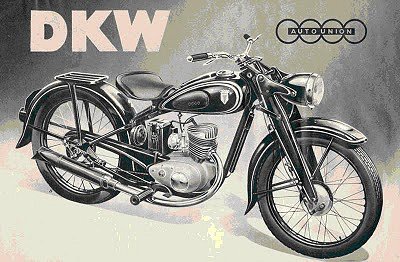 The RT 125 - DKW's "Little Wonder"
One of the most influential motorcycles in history.