The 1930s may well have been the start of a new world. It seemed in those days, you grew up and worked for a living like your parents did and the grand parents before them. Sure there were some improvements like electricity, motor vehicles and airplanes, but this had to be as far as modern technology possibly could go. What else could be accomplished that was not already done?

We all, or most people, felt Hitler might start a war, but that it would not last more than a year. World War II lasted four years, but people did not have the mass destructive weapons that they have now, like three and four engine bombers which can carry tons of bombs each. No, no, this would not last very long. How wrong a person can be, history will tell.

The collapse of the stock market in 1929 brought on an awful burden on Germany to pay off the debt of the loss from the First World War, the loss of their colonies, the advancement of communism, but above all, unemployment and the lack of strong leadership.

Finally, a strong leader by the name of Adolf Hitler, a corporal in WWI, rose to power. His methods were maybe not very honorable, but he got the people excited in that there would be a future for Germany.

So in 1933, Hitler became the supreme commander of the armed forces of the Third Reich (Nazi state). His party was called "Nationalsozialistische Deutsche Arbeiterpartei" (NSDAP) - National Socialist German Workers' Party, in short, the NAZI's. He urged the people to take their frustration out on the Jews, which the brown shirts executed. They burned and looted Jewish houses, and especially their businesses.

Hitler said, "This cannot be tolerated, so if every one that is a Jew will register then we can protect you." After they registered and the government had all the information, they systematically took over all their possessions, stores and factories. Then the Jews were accused of crimes against the state and the fatherland. "But we will look after you. Since you don't have a job, we will set up camps where you will be safe," said Hitler.

It's incredible what Hitler's Germany created in the few years that he became dictator. The best and cheapest car in the world (Volkswagen), the best motorcycle (BMW), the best dive bomber (Stuka - from Sturzkampfflugzeug), the best war ship (Bismarck), the best submarines, and don't forget the best tanks (Panzerkampfwagen Tiger Ausf. E, often shortened to Tiger) were manufactured in Germany.

All those things were done in secret, because under the treaty of 1918, Germany could not have any war equipment and only a very small army. So Hitler drafted every young man for work detail, and instead of rifles, they got shovels, and trained with the shovels like they were rifles. Nothing wrong with that, right? Of course, he tore up the IOU's of the First World War and thumbed his nose at the rest of the world, and became friends with Duce Mussolini. His actions affected our little country: the Dutch government became wary and started defence procedures. Of course, these procedures were not against Germany; we were strictly neutral, yes.

When a Dutchman once said, "Hitler is a murderer" after Hitler had some of his best helpers shot, the Dutch government had the man promptly jailed for insulting a friendly head of state.

The most naive, ignorant politician alive at that time was the Prime Minister of Britain, Neville Chamberlain. He flew to Germany after they annexed Hungary, the Saar, Sudetenland, Austria and told Hitler, "No more, that is enough, don't be so aggressive."

Hitler agreed and signed the necessary papers. On 30 September 1938, When Neville Chamberlain stepped off the plane in England, he waved the document and beamed, "Peace for Out Time". Some people actually cheered.

What was appeasement? Describe how Britain and France 'appeased' Hitler in the period 1933-1938. "Appeasement is 'giving a bully what he wants' ... Hitler built up his army. After 1936, he reintroduced conscription, and by 1939 Germany had 95 warships, 8,250 airplanes and an army of 1 million ... Hitler even war-tested his armed forces in the Spanish Civil War. Britain and France turned a blind eye to these breaches of the Treaty of Versailles ... In 1938, Hitler went further. He invaded Austria and declared Anschluss. This, too broke the Treaty of Versailles. Again, France and Britain did nothing ... at Munich (29 September 1938), Britain and France gave the Sudetenland to Germany. They gave the bully what he wanted."

The Munich Agreement from Wikipedia. "On September 30 [1938] ... Chamberlain went to Hitler and asked him to sign a peace treaty between the United Kingdom and Germany. After Hitler's interpreter translated it for him, he happily agreed ... On 30 September, upon his return to Britain, Chamberlain delivered his famous 'peace for our time' speech to delighted crowds in London." 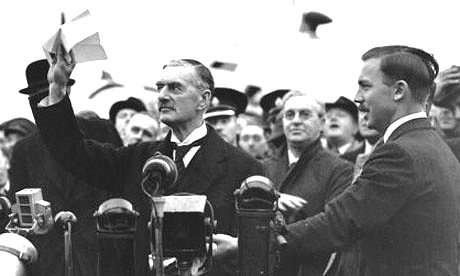 Neville Chamberlain: "Peace for Our Time"

Peace for Our Time from Wikipedia. "The phrase 'peace for our time' was spoken on 30 September 1938 by British Prime Minister Neville Chamberlain ... The phrase was a tribute to Benjamin Disraeli, who upon returning from the Congress of Berlin in 1878 stated, 'I have returned from Germany with peace in our time.' It is primarily remembered for its ironic value, as the German occupation of the Sudetenland began on the following day. Less than a year after the agreement, following continued aggression from Germany and its invasion of Poland, Europe was plunged into World War II."

The Armistice - Treaty of 1918. "In terms of military equipment, under the terms of the armistice the Germans lost 5,000 artillery pieces, 30,000 machine guns, 3,000 minenwerfer, 2,000 aircraft, 5,000 locomotives, 150,000 railway wagons, 5,000 trucks and its entire submarine fleet. The majority of Germany's surface naval fleet were interned; the remainder were disbanded." 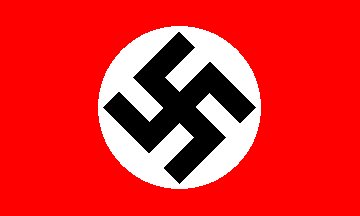 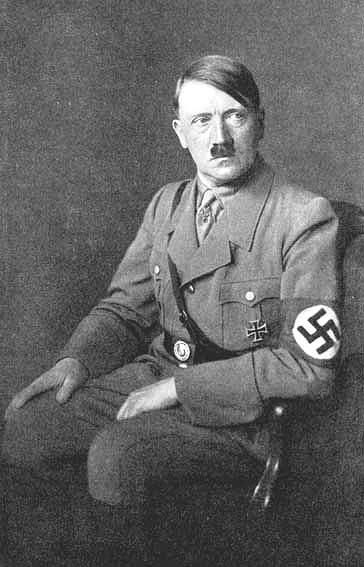 Adolf Hitler Timeline from World War 2 Diaries. "April 20, 1889 - Adolf Hitler was born in an inn in the Austrian village of Braunau-am-Inn, the forth of six children of Klara and Alois Hitler." Rebellious childhood. Artist in Austria, fighter in France. Road to Führer-dom. Rises to the Top. Prelude to a Nightmare. War! The Table's Turn. Hitler's End. "April 30, 1945 - Hitler commits suicide in the Führerbunker, simultaneously biting into a cyanide capsule while shooting himself in the head with the same pistol his niece Geli Raubal used to kill herself."

Führer from Wikipedia. "'Führer' was the unique name granted by Hitler to himself, and this in his function as Vorsitzender (chairman) of the NSDAP."

Jews in Nazi Germany. "Hitler blamed the Jews for all the misfortunes that had befallen Germany ... After January 1933, the Jews became the 'Untermenschen' - the sub-humans. Nazi thugs stopped Germans from shopping in Jewish shops. By 1934, all Jewish shops were marked with the yellow Star of David or had the word 'Juden' written on the window. SA men stood outside the shops to deter anyone form entering. This was not necessarily a violent approach to the Jews - that was to come later - but it was an attempt to economically bankrupt them and destroy what they had spent years building up."