Our source of supply was the province of Drente, about a hundred kilometers north east, way too far for horse and wagon. So we had to get a truck, but where? Many were taken by the Dutch army in 1939 and 1940 and the rest were hidden or taken apart so the Germans could not use them.

A few brave souls took a chance and kept on driving. Very soon, gasoline became a thing of the past, the little bit that we were allowed went for the fire departments. When that was gone, the Germans made gasoline out of coal. It smelled bad but it worked. But let nobody worry: you can run on coal or wood. Indeed they both work but now which is the best of the two?

For wood, you needed a 200 liter barrel for burner, filter, fire, etc. For coal, you needed double the size, that was one for burner, a big blower and fire, and the other was to filter the gasses.

Advantage for coal: you filled the container and could go for a hundred km, but it took much longer to get started in the morning and much more dirt and dust.

The wood burners started in 5 to 10 minutes. It was fairly clean but you had to take many bags of wood cut up to the size of cigars or little blocks, then stop every 15 or 20 km to feed the thing. You had to carry everything with you, there was no place on the road you could buy anything anymore.

Although you could drive, the power was about 50% down. When empty, those trucks would run about 60 to 70 km per hour.

When loaded with a three-ton load, the most the fellow I travelled with could drive in was third of the four gears he had on his Ford. He was our favorite with his 1934 Ford V8 running on coal. He drove most of the way in third gear at the neck-breaking speed of 25 to 30 km per hour, the best he could do.

It took us a full day to make a 200 km round trip. We liked him because he was trustworthy, not like one other guy we hired. This other fellow ran on wood with an extra tank of gas, and could switch over to gasoline which would give him a lot more power in case he got in trouble, he said. Sounded good, but when he got a load of wheat for us, he managed to steal two bags. First and last trip he made.

Our favorite man was careful and smart, he painted his truck the same grey color as the German army. I asked why, he said, "You will be surprised how many Germans think it is one of their own and when they realize I am not, it is too late to stop me."

Police and black market inspectors got fooled too. He probably was right because the times I went with him, we never got stopped.

This man played it safe just the same. I don't blame him because having a running truck in those days was like having a gold mine. He said, "I will haul anything from anywhere, but make it look legal."

It was well organized, this black market food trade. I was contacted by only one person, who would tell me what he wanted me to haul and where. The night before our trip, he handed me a bunch of papers with fancy stamps from the highest authorities. I hid them going to our destination then filled them in with the date, time, address and trucker, the whole bit and of course, a place beyond where we were going. According to the trucker, I was the official representative of mentioned authority and had the papers to prove it.

Our pick up was always down some deserted county road, or barn where it was hidden, or a farmer would bring it to us. This was done in case we got caught and were made to talk. It still would not be possible to involve anyone else.

When we came home, somebody would be waiting at a pre-arranged spot and when all was safe, point us to the receiver's place.

For every trip, we needed new papers. It was amazing what people could and would do in those circumstances. There were, of course, two reasons: one, hatred for the enemy; and second, hunger.

If you got caught in the black market, or for political reasons, there was no court or trial, you went straight to a concentration camp. You would be dressed in an old Dutch army uniform and got a black patch on your arm to identify you as a criminal, or a red patch if you were a political prisoner.

One time, I delivered some goods in the Amersfoortse camp, about 7 km from home, and had a first hand look at some of the inmates.

I can only describe it in one word "pitiful." Bald-headed and hollow-eyed, they barely lived from day to day.

Uncle Lambert Rutten, who spent a year and a half until liberation, said their daily ration was potato soup. He told me they looked for snails and ate them. When he was imprisoned for undermining the welfare of the German Reich, his weight was 90 kg. When he came out, he was a mere 45 kg and his mind was partly gone. Thank God, in time, both his health and mind returned to normal.

Figure 2. Car with a wood gas generator system behind the trunk.
The structure may be altered in any way by the plant.

Wood gas vehicles: firewood in the fuel tank by Kris De Decker. "During the Second World War, almost every motorised vehicle in continental Europe was converted to use firewood."

"Wood gasification is a proces whereby organic material is converted into a combustible gas under the influence of heat - the process reaches a temperature of 1,400 °C (2,550 °F). The first use of wood gasification dates back to 1870s, when it was used as a forerunner of natural gas for street lighting and cooking."

"In the 1920s, German engineer Georges Imbert developed a wood gas generator for mobile use . . . The technology became commonplace in many European countries during the Second World War, as a consequence of the rationing of fossil fuels. In Germany alone, around 500,000 producer gas vehicles were in operation by the end of the war." 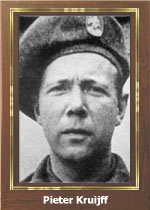 "The sabotage unit was led by Toon van Daalan and Bert Deus. As with most sabotage operations conducted throughout occupied Holland; this group attacked targets of opportunity. The K.P's transportation needs were handled by Menno Liefsting, whose primary responsibility was the movement of arms, ammunition and supplies from another resistance group in nearby Apeldoorn."

Dutch Resistance - Arnhem. "It is generally accepted that the Dutch Resistance in WW II was the best organized in Europe. It had a cell structure. Each cell was called 'knokploeg' (KP). Arnhem KP was ready for action and involved in intelligence and operational activities before the landings. The Arnhem KP was known as one of the finest in the country, not only because of the trained combat members but also the particularly well- educated technical personnel. These men and woman had set up a network of secret telephone lines to the already liberated south of the Netherlands and to other KP members throughout the country without using the public telephone exchanges."

"Another secret communication line was that of the PGEM (Geldersche Elektriciteit Maatschappij - Power Company). It had its own non-public telephone network. This line ran along the power cables and was used for communication between the electric stations throughout the region. Being a private line unknown to the enemy, it was safe for use by the Resistance. Before OMG (Operation Market Garden), the Arnhem KP sent many reports about the increasing number of units and armour in the area. Detailed reports on strength, units, vehicles and commanders were sent to England. These reports (as we know today) were backed up by British intelligence, monitoring German radio traffic and, verifying the reports of the KP."

"Arnhem KP received various orders to carry out sabotage operations (destruction of infrastructure, but in such a way that this could be quickly repaired for future use)."

Valkenburg resistance from Wikipedia. Small groups united into the LO (Landelijke Organisatie voor hulp aan onderduikers - National Organisation for help to people in hiding) . . . Another organisation was the Knokploeg (assaultgroup) or KP. The KP would obtain goods needed for the people in hiding and the LO would then distribute them."

● Oct. 10, 1940 - Show of Dutch resistance against German presence in the newly-reclaimed Noordoostpolder, leads to retaliation and arrest of 130 Dutchmen who are send to the Buchenwald concentration camp.

● Dec. 19, 1940 - The first two Dutch resistance men sentenced to death for acts of sabotage (the sentence was not carried out).

● Mar. 7, 1941 - First arrest of members resistance group OD. ["Orde Dienst" (Order of Service) otherwise known by its abbreviated name of OD had the primary mission of preparing for the return of the Dutch Government following Holland's liberation. The OD was made up primarily of former Dutch Officers and government officials ... The OD's main missions were to collect intelligence and develop plans for the maintanence of administrative services and civil order on the libertaion of Holland.]

● The Dutch Resistance During Operation Market Garden by Stewart W. Bentley. "There were four major Resistance Organisations in Holland by the middle of 1944. Surviving the early years of occupation and the ruthless German Counter Intelligence Operations; they operated in an extremely decentralised manner, refusing to coordinate their activities with other groups unless it was absolutely essential. Most of these groups did not answer to a central headquarters. Instead operating completely independently. Due to this type of operating method. Many members of the Resistance did not know to which group they belonged until after the war. As the war progressed and especially after the D-Day Landings in France; many groups transitioned into a more active and aggressive Resistance role.

Whilst maintaining a low profile. The L.O's primary objective was the protection and infiltration of onkerduikers; although their concerns went far beyond this. Food coupons were used by the Germans and the Dutch Nazi Government to ration food and to 'keep tabs' on the population. Obtaining these coupons was done in many fashions."

● Feb. 28, 1942 - First ever British weapons drop for resistance falls in hands of Germans waiting at the Hooghalen, Drenthe, site: Englandspiel in action.

● May 4, 1942 - Over 460 well-known Dutchmen taken hostage as leverage against acts of resistance. GAB of Arnhem put to torch by resistance.

Between Silk and Cyanide: A Codemaker's War, 1941-1945 (Google eBook). "In 1942, with a black-market chicken tucked under his arm by his mother, Leo Marks left his father's famous bookshop, 84 Charing Cross Road, and went off to fight the war. He was twenty-two. Soon recognized as a cryptographer of genius, he became head of communications at the Special Operations Executive (SOE) . . ."

"Leo Marks's ingenious codemaking innovation was to devise and implement a system of random numeric codes printed on silk. Camouflaged as handkerchiefs, underwear, or coat linings, these codes could be destroyed message by message, and therefore could not possibly be remembered by the agents, even under torture."

"Between Silk and Cyanide chronicles Marks's obsessive quest to improve the security of agents' codes and how this crusade led to his involvement in some of the war's most dramatic and secret operations. Among the astonishing revelations is his account of the code war between SOE and the Germans in Holland."