Chapter 66. From Bad to Worse

The last year of the war was the worst of all. Hitler's armies turned from offensive to defensive. He got clobbered on every front: Africa was lost, the Russians were beating him in the east, and the Allies were advancing from the west. Nowhere to go, the Germans became like tigers in a cage where they were being poked at from all sides with hot irons.

Day after day, the Hurricanes and Spitfires came hunting, always in pairs. They flew pretty high but, oh boy, when an army vehicle dared to come in the open they dove at it like a cat on a mouse, guns blazing. If the first one did not get him, the second would.

Trains were targets too. So now they built concrete bunkers on the back of the train to protect the engineer. That, however, didn't do much good because all the railroad workers walked off the job and disappeared.

One man with his wife and two daughters came to live with us until the end of the war. That was okay. He earned his keep. Every day, he went with the bike scrounging the country side for something to eat. He went all around, never gave up and brought home enough for us to get by.

One time, we had only what was called horse carrots to eat. Ma cooked them for a long time. We ate them on Friday and the next Wednesday I threw up, my stomach could not handle it. I developed heart burn and it stayed with me until we got something nourishing to eat again.

This last year, the resistance got more vicious too. In the beginning, it was more like helping downed airplane personnel, gathering information about troop movements, helping Jews, stealing and distributing ration cards to true patriots. As a result, many more men and women joined the "UNDERGROUND".

The black market gradually came to a stop. The farmers ran out of food too. Now everybody who wanted something to eat had to get it himself.

This became a disaster for the people in the big cities. They had coupons alright but that did not help and money did not count any more. Cats and dogs disappeared. Tulip bulbs saved many lives. The rest perished. Nobody ever found out how many people died of starvation. The survivors did not tell, they were ashamed.

The last winter 1944 to 1945 was unusually cold. Again, the people in the cities suffered the most. Holland had plenty of coal to keep the country supplied but all the transportation stopped. That was it. To keep from freezing and cook whatever they could get hold of, they tore up fences, furniture, inside door and window frames, etc.

In the older parts of Amsterdam, there were many streets with pavement made out of creosote and tarred blocks of wood. These got ripped up for firewood. The smell and smoke were awful but nobody complained. 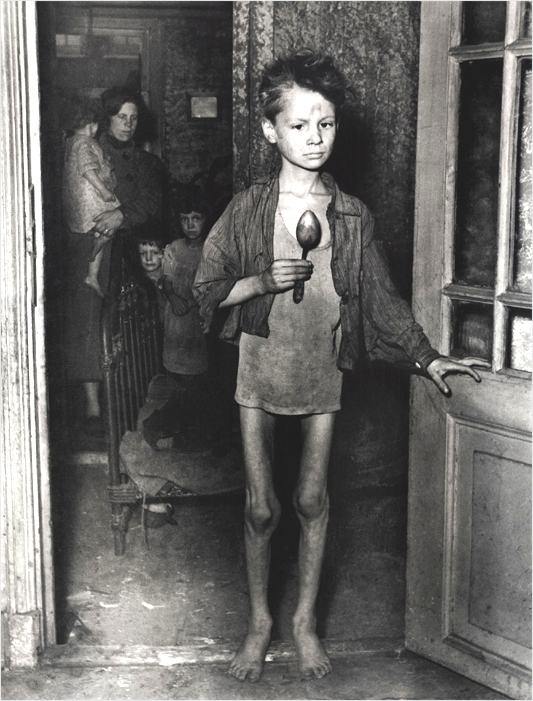 Photo from the Master Forger:
The Dutch Hunger Winter

The Dutch Hunger Winter from The Master Forger, a Production Blog, WordPress.com. "People walked for tens of miles to search for food, and many ended up eating tulip bulbs and sugarbeets because it was all that was available.

From September 1944 until early 1945 approximately the deaths of 10,000 Dutch people were attributed to malnutrition as the primary cause, many more as a contributing factor. The Dutch Famine ended with the liberation of the western Netherlands in May 1945." 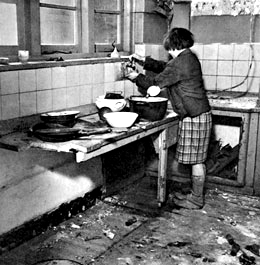 Photo from Glen Mitchell:
"... people started burning their own furniture and books to keep warm."

Dutch Famine of 1944 / Hunger Winter by Glen Mitchell. "In search of food people would walk for hundreds of kilometers to trade valuables for food at farms. Tulip bulbs and sugarbeets were commonly consumed. Not only was food in short supply, but coal and other fuel supplies were also disrupted. What trees existed in an urban environment were chopped down to be used as firewood. When that supply was exhausted, people started burning their own furniture and books to keep warm. Electricity, water, sewerage and public transport services simply disappeared (the streetcars themselves were stripped bare for anything flammable)." 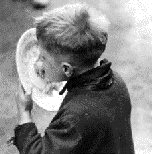 The hunger winter of 1944-45 from Amsterdam Tourism. "A cold winter: The Nazis, in retaliation for the strike, closed down all roads. Nothing moved anymore, no food, no fuel, no coal which most people still used for heating.

The West of the country, with its large cities, soon faced shortages of all commodities. The people grew hungry, but that's not all, it was also turning out to be one of the worst winters ever. People started to burn wood instead of coal, the houses of Jews who had been deported to Germany and Poland stood empty, soon everybody was stripping them down looking for anything to burn.

The Hunger winter 1940 - 1945: As food was no longer reaching the West, many of its residents left the cities looking for food up North. These were called hunger treks (hongertochten.)

... While nothing moved on the roads, this also affected the ordinary German soldiers, they also lacked food because of the blockades. So a lot of edibles were confiscated by grateful hungry German soldiers.

And while the farmers were usually willing to help, not all did so out of generosity, many asked hefty rewards of those who came to them for assistance. They knew how bad the shortages were and made huge profits out of them. The family jewels were often traded for as little as a sack of grain. The West of the country was now in famine.

Beet root became one of the main staples in the city, along with tulip bulbs. Potatoes were rare, and only available to the rich, people would scurry along their houses looking for potato skins, beet root was eaten as well and tulip bulbs. People who actually ate these bulbs will testify that few things are of fouler taste than tulip bulbs.

The toll: Over 20,000 people died of starvation during the hunger winter."

Dutch famine of 1944 from Wikipedia. "The Dutch famine of 1944, known as the Hongerwinter ("Hunger winter") in Dutch, was a famine that took place in the German-occupied part of the Netherlands ... during the winter of 1944-1945 ... A German blockade cut off food and fuel shipments from farm areas to punish the reluctance of the Dutch to aid the Nazi war effort. Some 4.5 millions were affected and survived because of soup kitchens. About 18,000 died because of the famine."

Coal, gas, and electricity were also cut off ... Rations were 1,500 calories in October, but sliced to 900 in November ... in some places had declined to 230 calories and even that was not always available by April. Municipal kitchens were set up, but little food was available. Old buildings were cut down as well as avaiable trees. The children and elderly especially began to exhibit symtoms of starvation (January 1945) ....

Children were sent by their parents into the streets to steal food. City dwellers in weakened conditions trekked into the country side attempting to trade whatever they possesed for food. Some farmers tried to help, but others saw these city people as thieves and looters. Often the food they obtained at great cost was confiscated by German patrols when the trekkers tried to return home."

... October 1944 ... food supplies became increasingly scarce. By November 26, 1944, official rations, which eventually consisted of little more than bread and potatoes, had fallen below 1000 calories per day, and by April 1945, they were as low as 500 calories per day.

Second World War: The Hunger Winter from Verzetsmuseum. "My linens, all my silverware, my carpet, a Smyrna stair-carpet - I traded everything for food. In the long run, the farmers wouldn't accept any more linen goods. Some of them even put up signs that said, 'No more linen goods'."